I have already been asked by a few people who’ve seen “The World According To Andy” on A Fleeting Glimpse why I had to be airbrushed out of the picture of Pink Floyd jumping down the steps of EMI. Why couldn’t they have just taken the picture again?

Unfortunately it wasn’t quite as simple as that. There’s a rather embarrassing story behind what happened that day. But, as it’s no more embarrassing than any of the other fiascos I was responsible for, I might as well fill you in.

The Floyd, along with Andrew King and Peter Jenner, had an appointment at EMI which was basically to rubber-stamp their arrival as a fully professional rock group. 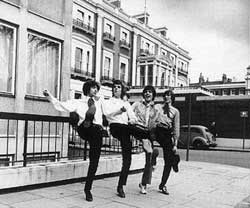 We arrived there in two cars. I had Rick, Syd and Storm Thorgerson with me, while Peter Jenner drove Nick, Roger and Andrew King. ( Artists in one car, businessmen in the other.)

They had a few minutes to kill, so a couple of photos were taken of the guys linking arms and kicking their heels up outside on the street. But once they’d gone inside, it was my job to make sure the parking meters didn’t run out.

I had plenty of coins on me, so there needn’t have been any problem. But that all changed when I accidently locked myself out of the car! Suddenly I found myself trying to break into the car, with the meters running out and my wallet pulling faces at me from the front seat! Fines for parking infringements were pretty steep in that area, so I was in a panic.

A meter maid appeared a block away, with only minutes left on our meters. Then I heard the guys come through the front doors and stand at the top of the stairs as Storm prepared to take their picture.

I had no alternative but to get some money immediately! So I charged up the stairs towards Roger.

My timing couldn’t have been worse. As I reached the top step the four guys leapt into the air. Roger caught me off balance and I tumbled backwards over the handrail. But the unexpected contact caused Roger to land awkwardly, and he fell, bringing Nick, Syd and Rick down with him, before cannoning into Storm’s tripod, smashing his camera!

It was an ugly scene indeed. The four Floyds spreadeagled across EMI’s front steps with an assortment of sprains, cuts and bruises. I fared a little better, having landed on a drunk sleeping in a garden bed below. But of course I then had to face the wrath of everyone for not only the injuries I’d caused, and for wrecking Storm’s camera, but also for the insult of copping two hefty parking tickets.

Storm, while at least able to salvage the shots he’d taken, said “I’m sorry, Albert, but you’re up for the cost of a new camera.” A grimacing Roger snarled “And you’re going to have to pay for those *&^#@ parking fines.” Then Nick Mason, rubbing his shoulder, added “And for our physiotherapy!”