Roger Waters This is Not A Drill Tour finally happened at Vivint Arena.  Like so many other tours, tickets went on sale two years ago.  And just like so many other tours, the show was postponed due to the pandemic.  But we finally made it.  Truck after truck lined the street outside the arena. More trucks than I think I’ve seen for a tour.  This indicated to me that whatever was going to happen inside was going to be a show of epic proportions.  People filed in through the doors and security checks.

There was no opener so people were advised to get in their seats early so they wouldn’t miss anything.  At 8:15 an announcement came that the show would start in 15 minutes.  The crowd gave a cheeky groan.  Fifteen more minutes after waiting two years almost felt unbearable.  But everyone was in good spirits knowing they were mere minutes away from seeing the legend of Pink Floyd

As I walked through the tunnel to be escorted to the photo pit I saw more computers than the trucks outside lining the tunnel. This was quite the production. As the lights started to dim, we were told that if we were the type of person that liked Pink Floyd but didn’t want to hear Roger Waters’ politics, we were invited to F*¢k off and go to the pub. This was met with a loud cheer. Although as the show went along, I don’t know that everyone was on board with Roger’s politics. But we were warned.

The lights went out and the massive screens lit up. This concert was in the round with a huge screen extending the length of the Vivint Arena floor sitting on the stage. There were screens also going perpendicular to the other screen making a plus sign or perhaps a cross. The lighting was dim but striking. Silhouettes of band members began to appear. From my vantage point, I could only see on guitarist, and I’d imagine in each quadrant another band member became visual. Then we heard, “Hello, (hello, hello) is there anybody in there? Please nod if you can hear me…” The crowd roared as the enormous Pink Floyd hit, “Comfortably Numb” started off the show.

“Happiest Days” flowed into “Another Brick in the Wall Part 2” and the audience rose to their feet. The volume was deafening. Again the moment was surreal. How long have I been listening to this song, to now be seeing it performed live by Roger Waters? “I’m told we were supposed to be here two years ago.” Waters exclaimed. He expressed that he was glad to be in Salt Lake City. He thanked those who held onto their tickets for two years and showed up. This was met with big applause by those who fit that category.

I have to mention this audience. They were an interesting bunch. Just looking around I could see that everyone was into this show. But they had different ways of showing how they would enjoy it. Usually, at a concert, there is a general consensus from the audience. They’re either standing up, or sitting down, or sitting and then standing for the big songs. This crowd was very different. Most of the audience sat as many of Rogers/ Pink Floyd songs are of a mellow nature. But not for some. Various packs throughout the venue stood up the whole time. Not only did they stand up but they were rocking out so hard, passionately singing every word. In my experience, there’s no such thing as a casual Pink Floyd fan. And that was made clear tonight.

Roger Waters went to the piano and suggested that the audience envision they’re in a bar sharing thoughts and ideas from politics to social issues. It was interesting to see a huge production become so intimate at times.

An understandable highlight for me was when Waters played “Wish You Were Here”. Across the screen, early photos of Pink Floyd played. The written story of Roger and Sid was displayed as the song went on. It was a great moment. I can’t believe within the first seven songs I heard some of the biggest pieces of music in Rock n Roll history.

The effects and imagery on the screen were intense. Roger spent his time evenly on each side of the stage. Imagery of war, social issues, injustice, politics, and many other topics important to Waters appeared on the enormous screens throughout the night. Sometimes the messages felt heavy-handed, even when I agreed with them. But more than anything I could feel his passion, how much he cared about equal rights and how important it was for us to be informed.
Photo Credit: Kevin Rolfe

Following an intermission, Roger Waters returned to the stage with guns blazing! Literally. Dressed in what might look like the attire of a fascist regime, Waters marched along the catwalks joined by soldiers during “In The Flesh”. A giant pig flew around the arena with “F*¢k the Poor” written along the side of it. Waters was clearly playing the role of a fascist leader. The song ended by shooting a prop machine gun. Things ramped up as Waters shouted out, “This is for you! It’s called ‘Run Like Hell’!”. The crowd roared, rose to their feet, and began clapping along. Roger Waters yelled “Louder!” “Follow Me” and “Enjoy Yourselves!” as the crescendoed. I did not expect the second half to begin like this. It was an awesome way to get the crowd fired up.

One of my favorite moments in the entire show was when Waters played the final cut of his final album with Pink Floyd, “Two Suns in the Sunset”. This concert was full of huge moments. But this song felt so intimate. Even with the big screens showing amazing graphics of traveling down a road. The movement on the screen felt so smooth that it felt like the arena was moving rather than what was on the screens. The moment felt reflective and nostalgic for the days of youth and Pink Floyd. It felt personal. In a room of thousands, it felt very personal.

The night ended with the final song on the album, The Wall,  “Outside the Wall”.   The crowd was delighted.  Albeit somewhat saddened that the show was coming to an end.  Before he song began, as the crowd was cheering Waters and his stellar band, Roger said, “I’ll just bask”.  As he took in the moment, the cheers, and the evening.  The roar grew.  Roger Waters led the band to the end of the catwalk announcing each member as they stepped down to walk backstage.  Roger was the final one on stage as the music continued to play.  As he waved goodbye the screen descended back into place on the stage.  The screen then showed Waters and his band in a circle backstage.  As the song ended the screens went black and the night was over.

What a trip. An incredible experience. I did not know what to expect. It would of course be political And it was. I knew there would be amazing music. And there was. Of the 24 songs in the set, 17 were Pink Floyd songs. Hard to not like that. The audience left feeling it was worth the wait and more than satisfied for what they just witnessed. Roger Waters just turned 79 two days before this concert. It’s hard to say how much longer he’ll tour, or if he’ll ever come back to Salt Lake City. If this was it, he left his mark on this town. A night of epic proportions. 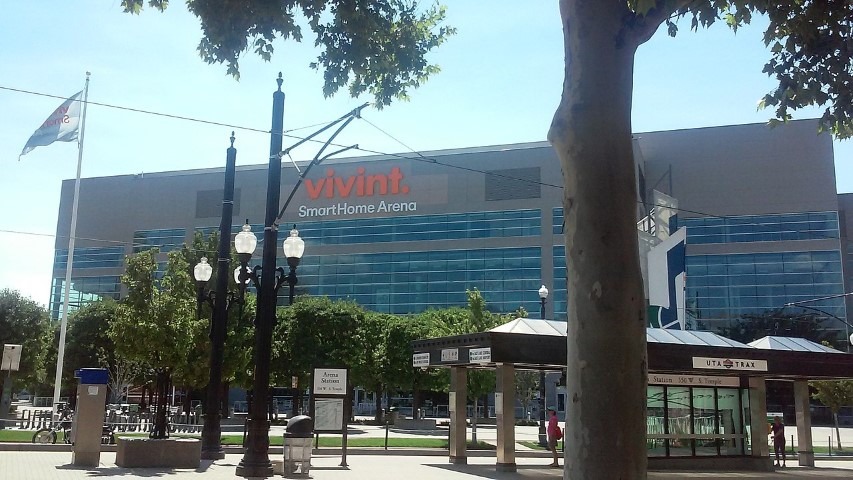 Vivint Arena (stylized as vivint arena), formerly EnergySolutions Arena or the Delta Center, is an indoor arena located in Salt Lake City, Utah. The arena serves as the home venue for the National Basketball Association (NBA)’s Utah Jazz, and has been the home venue for other professional athletic teams, such as the Arena Football League’s Utah Blaze and the Women’s National Basketball Association (WNBA)’s Utah Starzz. It seats 18,306 for basketball, 14,000 for ice hockey and indoor football, and 20,000 for concerts. It also has 56 luxury suites and 668 club seats.

The arena was originally imagined as 20,000-seat home for the Utah Jazz and Salt Lake Golden Eagles to replace the since-demolished arena of the Salt Palace, which had 12,616 seats. Under the leadership and private financing of Utah businessman Larry H. Miller, ground was broken on May 22, 1990, and it was completed on October 4, 1991, in time for late-October basketball games, at a cost of $93 million ($185 million in 2021 dollars).