Going to a show with only one of the founding members of Pink Floyd can be questionable to some, but the set proved that Roger Waters definitely has still got it. Despite his age, it seemed like the people in the crowd got close to the same visceral experience that they would have 40-50 years ago, and it would be ridiculous to pass up seeing such a legend.

The music is older than I am. There were other young faces in the crowd, but mostly fans who were around when they were touring in the 70s, 80s and 90s.

To see such a diverse age group in attendance showed how long lasting the Pink Floyd legacy is. Even if you were a fan sitting in the grass of some musical festival in the 70s during the genre’s formulation, you had the chance to see them 50 years later and reminisce about those feelings. Not many artists of our generation will have such a universal grip on the ears of those who listen.

The level of production for the show was obvious right off the bat. The audience was seated throughout but the stage was centered in the middle and completely visible from every angle in the arena. Giant screens above the stage made the show an immersive cinematic experience. 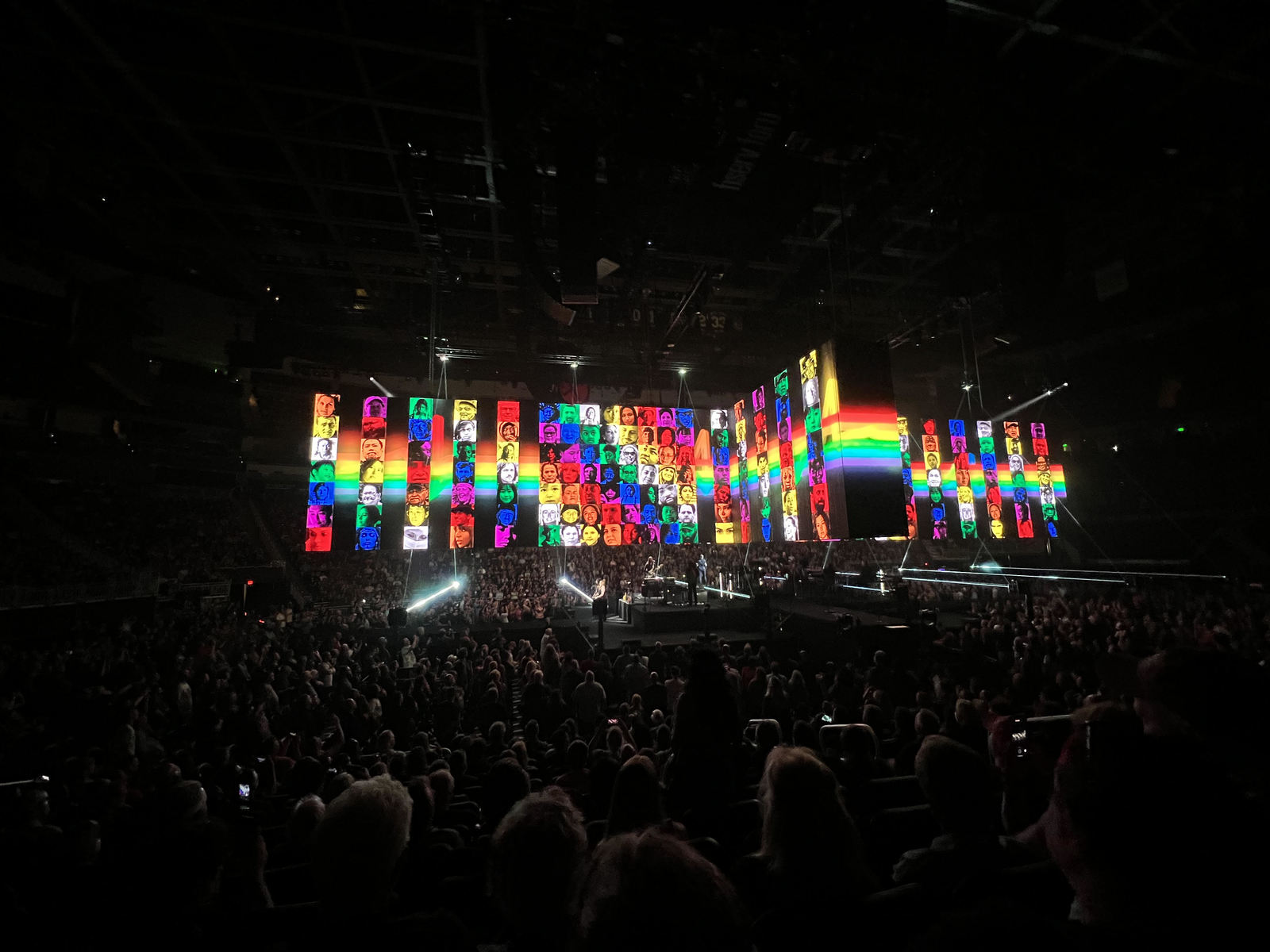 The screens illuminated with a message that read, “If you’re one of those people who love Pink Floyd but hate Roger’s politics, you can go F*** off to the bar now.” This warning was fair considering the majority of what played on the screen was political.

The set opened with “Comfortably Numb” which was a bold move in all the right ways, it was a perfect greeting into the psychedelic time machine that the audience would enter. Images of a dark crowd standing still floated on the screens, felt symbolic of the catatonic and helpless state the world is in post-Covid. Waters followed that up with “Another Brick In the Wall, Pt 2”.

The show was certainly political, and this has raised controversy with a few of the older fans, some of which refuse to go to avoid the commentary, despite their love for the music. Waters continued on with an older song from one of his solo albums, “The Powers that Be”, as the screens projected names of black people who have died at the hands of police brutality. Accompanied by the 80s synth sounds, this had a very chilling composition.  The incidents were detailed by location, crime and punishment.

Regardless of political stance, this was an intense and mesmerizing sight. He addressed the crowd to talk about his message after the song.

“If you’re not in this room today to exchange love to one another, I don’t know why you’re here,” shouted Waters.

He also played the 1999 Ronald Reagan leaving office speech, which showed Reagan’s face covered by a red filter. Soon the words, “war criminal, killed 30,000 innocents in Guatemala” were written across his face. 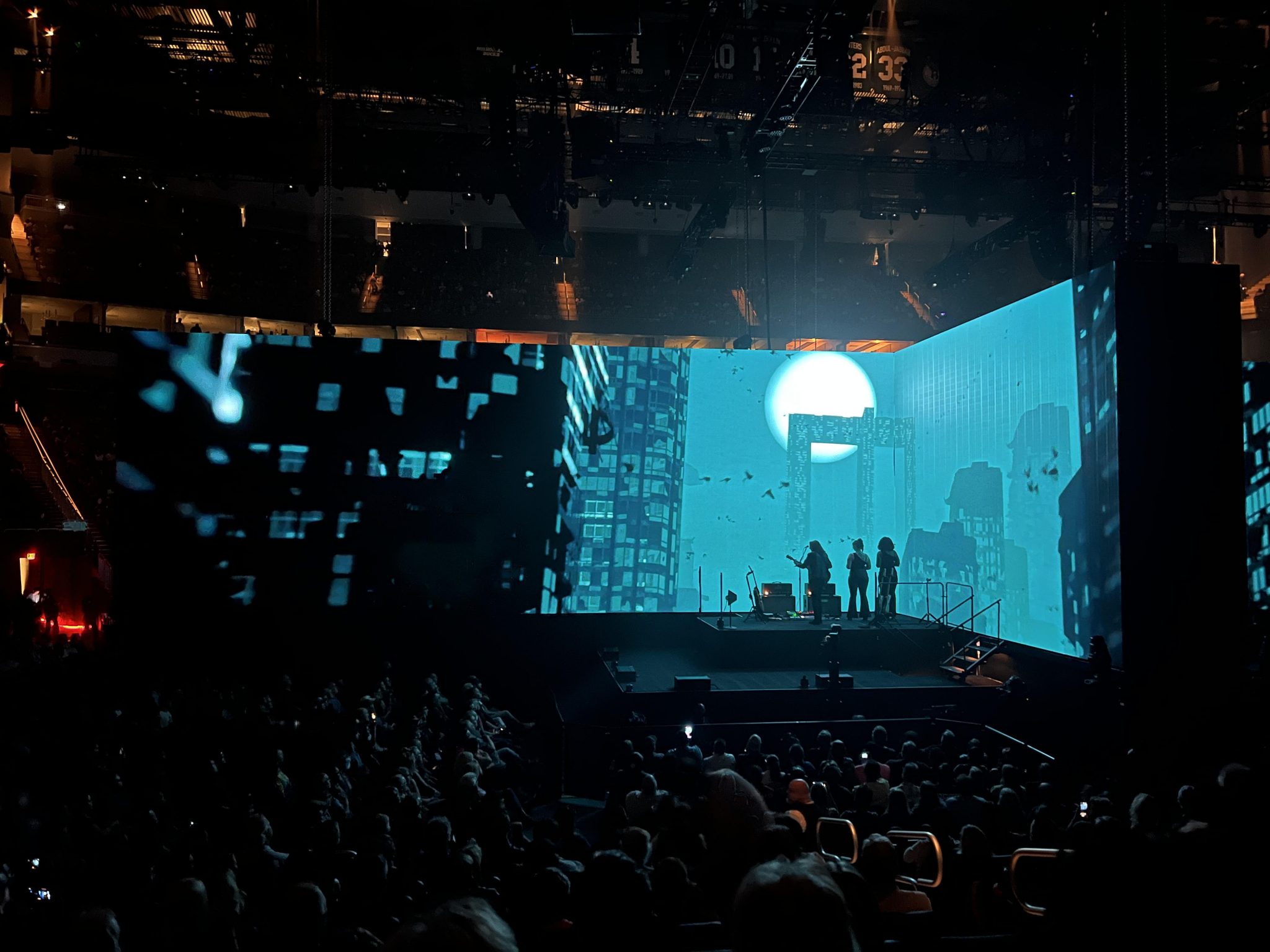 Several presidents followed with similar accusations sprawled over them. This definitely caused some reflections on not the presidents themselves, but the government in its entirety. It was interesting to gain the perspective of a man from a band who has lived through a good amount of national atrocities. However, I’m sure there were plenty of people in the crowd who maybe would’ve preferred less of it.

Outside of politics, the show mostly consisted of Pink Floyd’s music, a lot of it from “Dark Side of the Moon”, some from “Wish You Were Here” and little from “Animals”. Some of the most fascinating images were displayed throughout these songs, even in-utero fetuses floated across the screens. During the actual song “Wish You Were Here”, the screen shared sweet momentos about Roger’s and Syd’s experiences in London.

A high point was during “Money” and “Shine On You Crazy Diamond”, where each band component could individually shine. The guitar solo during “Money” was executed perfectly by the touring guitarist Jonathon Wilson as Water’s took out the bass. Water’s vocals were still impressive for a 78-year-old who has been singing for all these years. Overall, Pink Floyd fans could safely leave satisfied, as they got much more of the band’s discography than Water’s solo stuff.

“Dark Side of the Moon” was the last song before the outro and made for the coolest stage presentation of the show. Lazer triangles lined the outsides of the stage and projected the band into a space-like moment. People in the crowd stood to show their love and appreciation for a song so pivotal in the psychedelic music world. In such a chaotic world state, the music brought everyone together, just as it did during the social movements that shaped its creations.

Waters walked the stage with his ensemble introducing each member as they waved goodbye at the end. Even though he won’t be around forever, the music will always be here, uniting people as it always has. 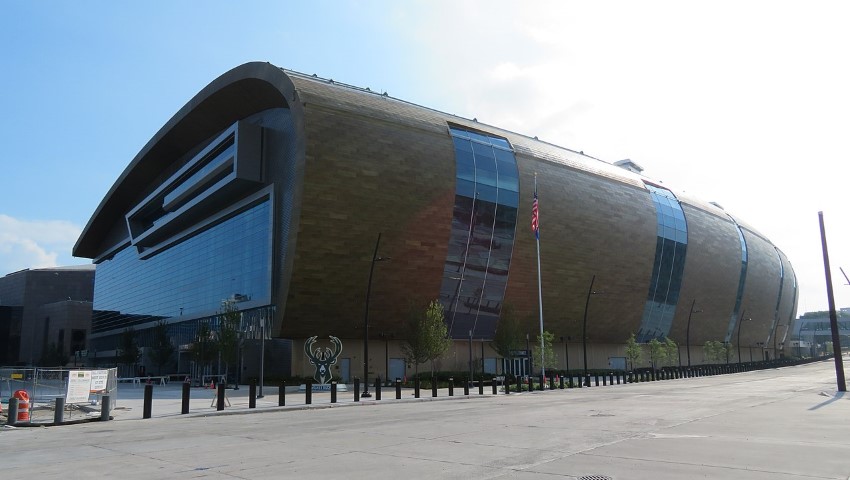 Fiserv Forum is a multi-purpose arena located in downtown Milwaukee, Wisconsin. It is the home of the Milwaukee Bucks of the National Basketball Association (NBA) and the Marquette Golden Eagles men’s basketball team of Marquette University.

Groundbreaking and construction began on June 18, 2016, and the arena received its certificate of occupancy on June 5, 2018.The arena opened on August 26, 2018