Roger Waters’ superpower is the ability to open difficult conversations through his music, and he knows it. The former Pink Floyd mastermind’s catalog is so wholly beloved by rock fans of all ideologies that many will tolerate disagreement with the outspoken artist’s longstanding views on human rights, fascism, Israel’s Palestine policies, and war rather than miss a chance to hear evergreens like “Another Brick in the Wall, Part 2” performed by their author. Tuesday’s concert at United Center began with a wry, pre-recorded caveat: “If you’re one of those ‘I love Pink Floyd, but I can’t stand Roger’s politics’ people, you might do well to f- – – off to the bar.”

Waters’ “This Is Not a Drill” tour arrived two years following a planned but pandemic-delayed 2020 date. The ambitious presentation was fractionally less caustic than 2017’s “Us + Them” concerts, omitting the polarizing image of Donald Trump affixed to Pink Floyd’s famous inflatable pig prop. Waters’ new show was nonetheless pointed. Circling the arena Tuesday evening during“In the Flesh?,” the pig was freshly emblazoned with the cheeky anti-establishment message, “Steal from the poor. Give to the rich.”

The English singer appeared limber and fit at 78, punctuating singalong moments during a retooled “Comfortably Numb” with his hands thrust skyward. Waters performed in the round, prowling the stage and shrinking the distance between artist and audience. Massive overhead screens divided the room into quadrants and yielded the opposite effect, rendering Waters’ statements larger than life.

The show touched briefly upon Waters’ 2016 solo album “Is This the Life We Really Want.” The protest record’s “Déjà Vu” was accompanied by footage of deadly drones in the Middle East. “Every time the curtain falls on some forgotten life, it is because we stood by silent and indifferent,” sang Waters at the conclusion of the album’s title track.

Waters surprised his solo catalog’s devotees by dusting off “The Bravery of Being Out of Range” from 1992’s “Amused to Death.” Overhead footage named all presidents back to Reagan as war criminals, listing deadly excursions on each’s watch. Joe Biden’s entry read, “Just getting started.” “The Powers That Be” from concept album “Radio K.A.O.S.” was accompanied by names of lives lost to police brutality.

Pink Floyd fans were thrilled to hear side two of 1975’s “Wish You Were Here” LP. The rootsy title cut and rapturous “Shine On You Crazy Diamond (Parts VI-IX)” were accompanied onscreen by a touching story of Waters’ friendship with star-crossed Pink Floyd co-founder Syd Barrett. “When you lose someone you love, it does serve to remind you. This is not a drill,” read Waters’ words. The tour’s name thereby underscored the humanity underpinning the show’s sometimes acerbic commentary.

Waters gamely claimed rare flubs, recovering from a dropped lyric during “Have a Cigar” with a warmly bemused smile. He admitted swapping a couple of piano notes during “The Bar,” but the new song’s inclusive sentiment landed smoothly. “The Bar” conjured a welcoming setting for strangers to discuss important topics without fear. “It’s a place where you can communicate your love with other human beings,” Waters said. “That’s what this room is, here tonight.”

Side two of Pink Floyd’s crown jewel “Dark Side of the Moon” was another extended treat. Waters’ familiar bass line propelled “Money,” and the song highlighted an impressive band including saxophonist Seamus Blake. “Us and Them” couched its mournful anti-war message within a sublime melody and Robert Walter’s dreamlike organ.

“Two Suns in the Sunset” appeared from “The Final Cut,” Waters’ final Pink Floyd album. The song’s apocalyptic vision suggested that in the face of mutually assured destruction, all people are created equal. Waters has identified the intent behind even such nightmarish images as the promotion of love.

“We should all do a lot more communicating,” Waters said during his parting remarks, expressing desire to break the cycle of perpetual war. Waters thanked the audience in Chicago for communicating its love “and accepting our love from the stage to all of you.”

Jarring and defiant images may have chafed with kind words of unity, but those clashing concepts reveal Waters’ essence. Perhaps “This Is Not a Drill” represents a “scared straight” path toward peace and understanding. 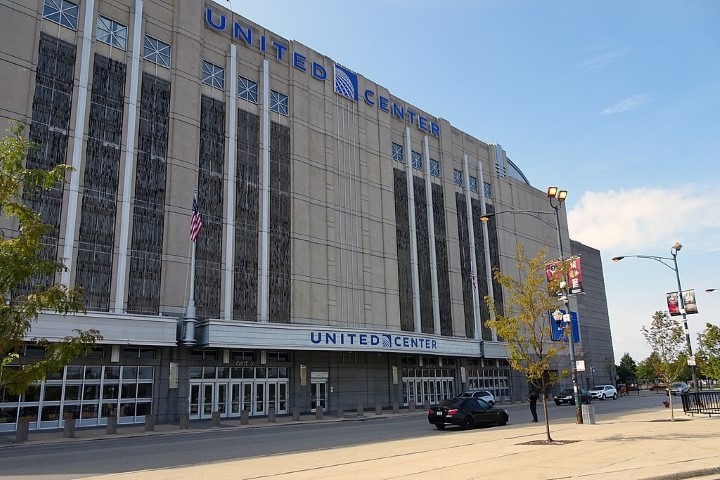 United Center is an indoor arena on the Near West Side of Chicago, Illinois, United States. It is home to the Chicago Bulls of the National Basketball Association (NBA) and the Chicago Blackhawks of the National Hockey League (NHL). It is named after its corporate sponsor United Airlines, which has been based in Chicago since 2007. With a capacity of nearly 21,000, the United Center is the largest arena by capacity in the NBA, and second largest arena by capacity in the NHL.

The arena is home to an iconic statue of Michael Jordan built in 1994. Originally located outside the arena, it now stands inside an atrium which was added in 2017. The statue has since been joined by statues of Blackhawks legends Bobby Hull and Stan Mikita, while a statue of various Blackhawks players is located across the street on the site of Chicago Stadium.