As the lights dimmed Saturday night at Roger Waters’ concert at Target Center, a voice came over the loudspeakers asking the crowd to turn off their cellphones and then adding, “If you’re one of those ‘I love Pink Floyd but I can’t stand Roger’s politics people,’ you might do well to f— off to the bar right now.”

Consider it his way of saying: “Minneapolis, are you ready to rock?”

It seems unbelievable in the year 2022 that anyone going to see Roger Waters needs to be warned about his politics. And yet, the Pink Floyd co-founder still manages to upset people with his famously — some will say belligerently — outspoken views, which on his previous tour included sharp criticism of then-President Donald Trump and Israel’s Palestinian policies.

That said, the crowd at the downtown Minneapolis basketball arena roared at the line and showered the 78-year-old Waters with adoration the entire evening. They also gave a hearty laugh late in the show when Waters said: “I’m not going to preach, it’s not in my nature.”

Regardless of your political views, it was tough not to be impressed by a performance stunning in every way, from the towering sound (the finest I’ve heard at Target Center) to the eye-popping visuals projected across a cross-shaped video wall suspended above the in-the-round stage at the center of the arena.

Waters split the evening into two sets with a 20-minute intermission. The first included four songs from “The Wall,” the second side of “Wish You Were Here,” the “Animals” cut “Sheep” and three tracks from Waters’ solo career, which has traditionally struggled to find a greater audience.

As such, he added some stark visual content to the solo stuff. During “The Powers That Be,” gory animation depicted police murdering Black men as their names — including Philando Castile and George Floyd — flashed across the screens. “That was pretty brutal, I know,” Waters said. “But we live in a brutal world.”

He followed with “The Bravery of Being Out of Range” accompanied by graphics branding Ronald Reagan and the four presidents who followed war criminals. It concluded with a shot of President Joe Biden with the caption “just getting started” on his own war crimes.

Waters explained he wrote the song “The Bar” during the pandemic, imagining the pub of the title as an imaginary place where all opinions can be voiced and heard.

During the “Wish You Were Here” segment, the screens showed vintage Syd Barrett-era Pink Floyd as a story unfolded about how Waters met Barrett and the friendship that followed. He wrapped the first set with the dark and foreboding “Sheep,” complete with floating sheep and tweets about Roe v. Wade.

Four more songs from “The Wall” opened the second set, with Waters dressed as a dictator and firing at the crowd with a (fake) semiautomatic rifle at the end of “In the Flesh.” After another pair of solo tracks, Waters and the band launched into side two of Pink Floyd’s biggest album, “The Dark Side of the Moon.”

As the last notes of “Eclipse” seemed to offer hope for the future, Waters performed Pink Floyd’s “Two Suns in the Sunset.” The second sun in the title refers to a nuclear explosion. He thanked the crowd and played “The Bar” once more. And somehow, it all made sense in the end. 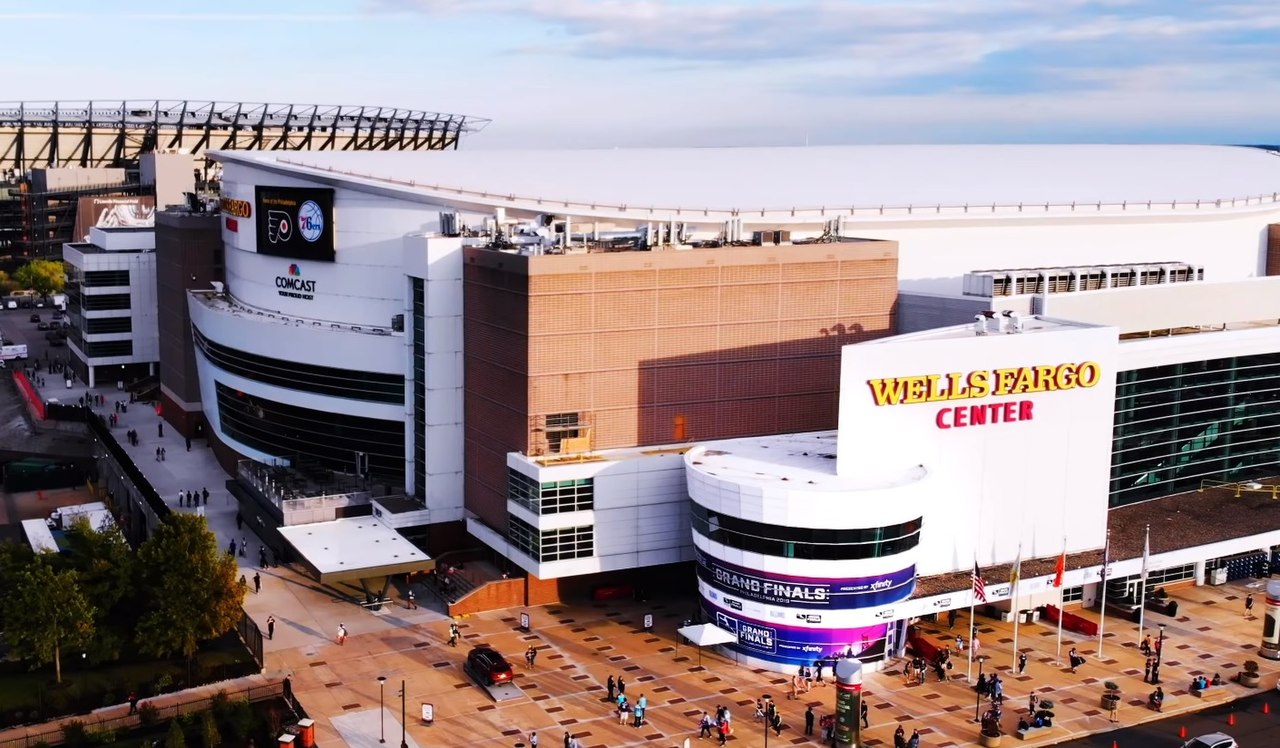 The Wells Fargo Center, originally called Spectrum II, was completed in 1996 to replace the Spectrum as the home arena of the 76ers and Flyers, on the former site of John F. Kennedy Stadium at a cost of $210 million, largely privately financed (though the city and state helped to pay for the local infrastructure). It is owned by Comcast Spectacor, which also owns the Flyers, and is operated by its arena-management subsidiary, Global Spectrum.