No matter who you vote for in 2022, if you’re at a Roger Waters concert of your own free will and you understand the English language, you must have at one point railed against the powers that be. During his nearly two-decade tenure with the pivotal British psychedelic band he cofounded, Waters composed some of the most powerful songs of the rock ‘n’ roll era. And many of those songs were angry rants about the greed and violence of the ruling class.

Throughout his two hours onstage in Miami (the concert included a 30-minute intermission), Waters employed intense visuals to demonstrate all that’s wrong with the world. Explosions via drone, police brutality, and newspaper headlines proclaiming that billionaires are 27 percent richer than before the pandemic flashed on the screen while a giant pig helicoptered around the venue with the words “fuck the poor” written on its side. In this outrage society, I would have thought some in attendance would balk at Waters’ stances. Maybe they figured his revolutionary stance was a schtick? After all, he was charging hundreds of dollars a head to hear him voice his protests inside a venue named after a cryptocurrency exchange.

But the obvious reason no one fucked off to the bar was that the music Waters was making was simply too damn good. At 78 years of age, the black-clad singer could still create phenomenal sounds. He was surrounded by nine musicians, including two soulful female backup singers and an occasional saxophonist to solo on a couple of Dark Side of the Moon tracks. His band hit all the familiar notes for anyone who ever listened to a classic rock radio station. They reached their crescendo during the extended bluesy instrumentation of “Shine On You Crazy Diamond,” which made at least one audience member wish he was imbibing a substance more mind-expanding than a craft beer.

Waters sat at the piano several times to sing a ballad he said he wrote during the pandemic called “The Bar.” He explained before singing it that the song imagines the world as a bar where all of humanity can coexist joyfully. A short while later, the world, or at least the cavernous venue, did seem harmonious when everyone sang along to “Wish You Were Here.” For that song, the filmed imagery was personal rather than political. The text described Waters’ reminiscences of Syd Barrett from when they first decided they would form a band to when Barrett’s mental illness forced him to leave Pink Floyd. As the song ended, a quote revealed how the tour got its name: “When you lose someone you love, it does serve to remind you this is not a drill.”

If this is it, this is our only life, and the world is in as dire straits as Roger Waters fears, this was a good show to go out on. 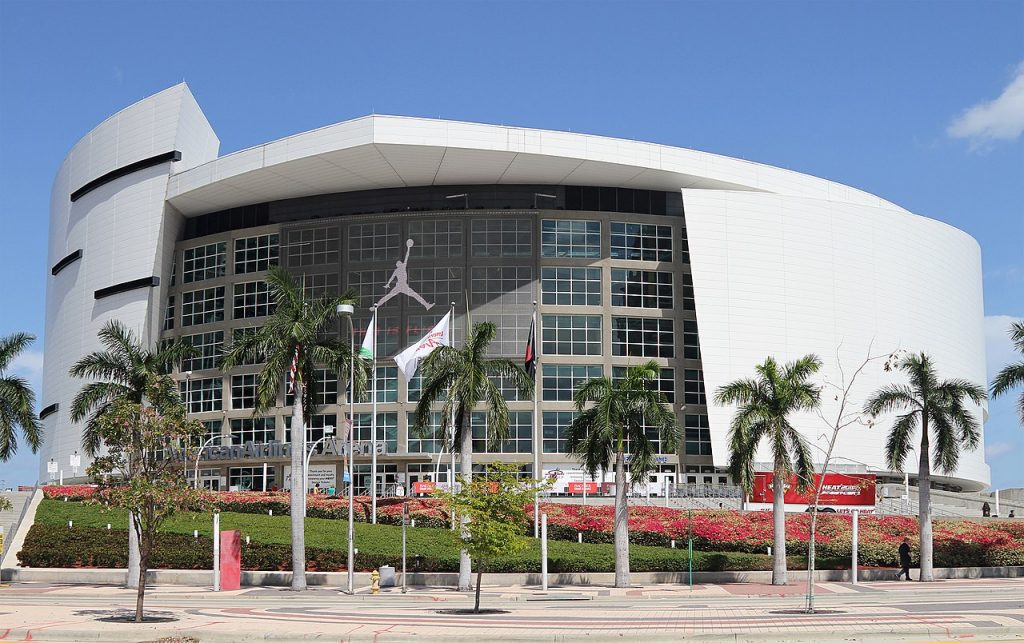 The FTX Arena (formerly known as American Airlines Arena) is a multi-purpose arena located in Miami, Florida, along Biscayne Bay. It was constructed beginning in 1998 as a replacement for the Miami Arena and designed by the architecture firms Arquitectonica and 360 Architecture. The arena is home to the Miami Heat of the National Basketball Association.

The FTX Arena is directly served by the Miami Metrorail at Government Center station via free transfers to Metromover Omni Loop, providing direct service to Freedom Tower and Park West stations. The Arena is also within walking distance from the Historic Overtown/Lyric Theatre Metrorail station.

The FTX Arena has 2,105 club seats, 80 luxury suites, and 76 private boxes. The Waterfront Theater is Florida’s largest theater which is housed within the arena, that can seat between 3,000 and 5,800. The theater can be configured for concerts, family events, musical theatre and other stage shows. American Airlines which has a hub at Miami International Airport maintains the FTX Arena Travel Center at the venue