Most musical artists are content to have their live audiences just lean back, cheer them on, and enjoy the show, but for legendary singer-songwriter Roger Waters, the Pink Floyd co-founder compels you much further into his world- one, of not only his own personal and former band’s often tortured history, but the geo- and socio-political history of the modern world itself, as seen through his now 78-year-old eyes.

No simple task indeed, his This Is Not a Drill Tour is a high-production, expertly executed immersive audio-visual arena-sized experience, that is the clearest vision of Waters’ own personal vision to date.

Since Pink Floyd’s unceremonious breakup in the mid ‘80s, it had been the other faction, made of up of remaining members David Gilmour, Nick Mason, and Richard Wright, that had been staging more successful and larger scale tours, until the Waters version began to increase in momentum over the last couple decades.

More recently, tours focused on Dark Side of the Moon, The Wall, and his previous Us+Them (which opened in KC), has found him selling out arenas regularly once more.

This tour finds Waters playing in-the-round for the first time, on a cross-shaped stage with accompanying massive screen and enhanced audio (& 140 crew members), making every seat in a cavernous arena, able to clearly see and hear what Waters is calling his “first farewell tour” (scheduled for only the US, Canada, & Mexico, UK/EU and other intl. dates are assumed to follow).

His first of two sets, this one sixty-five-minutes in length, was prefaced by a pre-show warning if offended by his politics, to head for the bar now. Thunder clapped as lights when down and a dark, dystopian urban landscape (not unlike in Matrix Revolutions) flashed on-screen, cuing up a downtempo “Comfortably Numb” with near-spoken word vocals and monk choir-esque choruses.

The video accompaniment to 1987’s “The Powers That Be” and 1992’s “The Bravery of Being Out of Range” called out authorities for unwarranted killing of minorities (including a Kansas City man) and labeled the last half-dozen US presidents as war criminals for atrocities committed on their watch, as a first serious test of audience member’s fortitude to Waters’ unabashed and extreme political views.

Waters has a new song to correspond with the tour- “The Bar” imagines the arena as a neighborhood pub, one where any and all can go to debate topics, agree to disagree, have a pint, and feel some community – something wishful awash in a sea of so much shown despair.

Side B of 1975’s Wish You Were Here and an impressively extended “Sheep” from 1977’s Animals would end the first act, not only letting the band flex its formidable instrumental muscles, but also let a drone-flown inflatable sheep roam, tumbling end-to-end around each side of the arena.

More recent solo songs would follow (likely unfamiliar to most) with Waters still delivering in relatively good (though lower-key) voice and a spry presence of working all four sides of the stage throughout, as he sang, “Every time the curtain falls on some forgotten life, it is because we all stood by, silent and indifferent…” from the title track of 2017’s fourth solo album, Is This the Life We Really Want?, “…it’s normal.”

Fans of 1973’s seminal Dark Side of the Moon (who isn’t, really?) were rewarded with Side B of that timeless album, one that has sold nearly 50 million copies and charted just shy of 1000 weeks on the charts.

The set was then winding down, not with a hopeful song of togetherness, but one that highlighted the results of nuclear obliteration, “Two Suns in the Sunset”, the closer from 1983’s brilliant but overlooked The Final Cut, an unofficial Waters solo album due to Wright’s absence and the remaining Floyd members’ minimal contributions.

New song “The Bar” would make a brief return appearance (Waters debuted then-new song “Each Small Candle” in KC in 1999, though we didn’t hear much it of after that tour) and the show would end as The Wall show did, with “Outside the Wall” and each of the band members walking in line behind Waters, taking a well-deserved victory lap around the stage, before screen credits rolled and disappearing into off-stage darkness.

Still the perfectionist, outspoken, cantankerous, and unapologetic personality he’s always been, Roger Waters has long stopped caring about what anyone else thinks, and instead has channeled his energies into his own personal vision, both musically and live, with the added visual aspect. Love that about him (and his political and cultural views) or not, This is Not a Drill is his closest honing of that vision come to life on the live stage, to date. 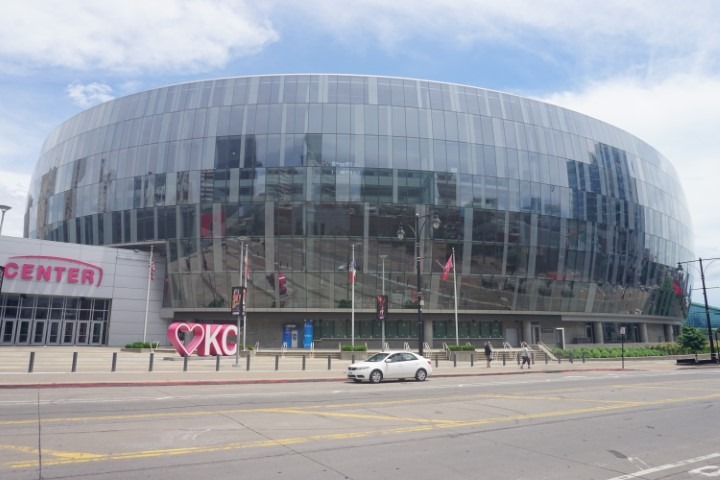 T-Mobile Center (formerly Sprint Center) is a multi-purpose arena in downtown Kansas City, Missouri. It is located at the intersection of 14th Street and Grand Boulevard on the east side of the Power & Light District. It has effectively become the city’s primary indoor arena, a role previously held by the Kemper Arena, which had been built in 1974 a few miles away in the West Bottoms neighborhood.

In April 2020, T-Mobile US became the naming rights partner by completing a merger with Sprint Corporation.[10] On July 9, 2020, Sprint Center was officially renamed to T-Mobile Center.Changes include an entrance specifically for T-Mobile customers, a lounge with tables that can charge smartphones wirelessly, charging stations all over the arena, T-Mobile 5G coverage, and a monument outside saying “Heart KC”.