Roger Waters was upfront about what fans could expect from his show on Friday night at Chase Center.

“If you’re one of those ‘I love Pink Floyd, but I can’t stand Roger’s politics’ people, you might do well to (expletive) off to the bar right now,” the vocalist-bassist said in a recorded message played to the crowd just before taking the stage in San Francisco.

The Rock and Roll Hall of Famer, who was enshrined as a founding member of Pink Floyd in 1996, then spent the next 2 1/2 hours making good on that warning, hitting the packed house early and often with politically charged rhetoric and messages in fashions that were impossible to ignore.

But that’s the point, right? Waters isn’t willing to let you ignore the message in favor of just enjoying a drink while pumping your fist to “We don’t need no education” in “Another Brick in the Wall, Part 2,” during his aptly and urgently named This Is Not a Drill tour.

hat unyielding commitment to the message – whether you agree with the message or not – is what truly has made Waters one of the most important and successful artists of the last 50-plus years. A person doesn’t spearhead the creation of something like “The Wall,” for example, by being only partially committed to what he wants to say.

And, ultimately, that fierce commitment to marrying the music with the message is what made Friday’s show – part of a two-night stand at Chase Center – so wonderfully impactful and memorable.

Working “in the round” for the first time in his career, with the large stage placed at the center of the arena floor and surrounded by fans on all sides, Waters opened the show with an even-drearier-than-usual take on “Comfortably Numb.”

It was a bold move, coming from a bold artist, to change up one of Pink Floyd’s most famous songs right out of the gate – and I’m sure that many fans in attendance questioned the decision to zap out the beloved guitar solo, which is widely considered to be one of the greatest in rock ‘n’ roll history. (And I’m sure some conspiracy theorists might have seen this as a not-so-subtle diss of Floyd guitarist David Gilmour.) Yet, the move definitely worked to set the dystopian mood.

Waters upped the energy as he stuck to “The Wall” for a seamless run through “The Happiest Days of Our Lives,” “Another Brick in the Wall, Part 2” and “Another Brick in the Wall, Part 3,” before turning his attention to his solo catalog for a powerful double shot of “The Powers That Be” (from 1987’s “Radio K.A.O.S.”) and “The Bravery of Being Out of Range” (from 1992’s “Amused to Death”).

That solo segment started out with some gut-wrenching visuals, shown on the big overhead screens, of the killings of George Floyd, Hayward’s Oscar Grant III and other victims of racial/social injustice. From those victims, Waters turned his attention to past U.S. presidents – including Ronald Reagan and Barack Obama – labeling them as “war criminals” and detailing their crimes against humanity. He’d also include Joe Biden in the mix, with the tagline that the current U.S. president was “just getting started.”

Ironically, Waters wasn’t letting the warnings of gloom and doom that he was peddling impact his mood. He was actually quite joyous onstage, smiling broadly and interacting both with the crowd and his fantastic band, which is highlighted by the work of great guitarist Dave Kilminster.

“Don’t be surprised if I look like I’m enjoying myself,” Waters said. “Because I am.”

After sitting at the piano to play part of a nice new song — “The Bar” — Waters dove right back into the Floyd catalog for a triple shot off 1975’s “Wish You Were Here,” performing the charged-up “Have a Cigar,” the soft, acoustic-driven title track and portions of the interstellar “Shine On You Crazy Diamond,” before bringing the first set to a close with “Sheep” from 1977’s “Animals.”

The 79-year-old rock legend kicked off the second set, like the first, in “The Wall” territory, performing “In the Flesh” and following up with the always muscular “Run Like Hell.” He’d move back to his solo catalog to perform the title track and “Deja Vu” from 2017’s “Is This the Life We Really Want?”

What came next, not surprisingly, was the highlight of the entire show as Waters landed on “The Dark Side of the Moon” – the 1973 Pink Floyd masterpiece – for a transcendent five-song run through “Money,” “Us and Them,” “Any Colour You Like,” “Brain Damage” and “Eclipse.”

As “Brain Damage” melded into “Eclipse,” and the “Dark Side” closer ramped up in intensity, the crowd rose to its feet in complete classic-rock euphoria.

It would have been a triumphant way to close the show, sending folks out of the building on a huge high note and buzzing about how Pink Floyd was pretty much the best band ever, and I’m sure that Waters knew all of that.

So, of course, that’s not what he decided to do. Instead, he decided to slow things down, get somber and serious, and tackle the possibility of a nuclear holocaust in “Two Suns in the Sunset” – the final cut on Pink Floyd’s “The Final Cut.” The show closed in meditative, low-key fashion with a return to the new song “The Bar” that peacefully transitioned into “The Wall” closer “Outside the Wall.”

It’s all about the message, right? And Waters never lost sight of that for a second on Saturday night at Chase Center.

Review with thanks to Jane Tyska 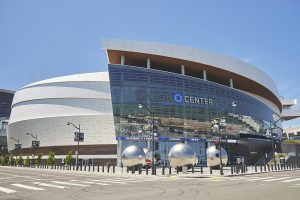 Chase Center is an indoor arena in the Mission Bay neighborhood of San Francisco, California. The building is the home venue for the Golden State Warriors of the National Basketball Association (NBA) and occasionally for the University of San Francisco men’s and women’s basketball teams in the National Collegiate Athletic Association (NCAA). The Warriors, who have been located in the San Francisco Bay Area since 1962, played their home games at Oakland Arena in Oakland from 1971 to 2019. Chase Center opened on September 6, 2019, and seats 18,064 for Warriors games.