A little mini drama took place at the will call window moments before Roger Waters was scheduled to take the stage for his “This is not a drill” concert on Aug. 10 at Nationwide Arena (200 West Nationwide Boulevard in downtown Columbus). A mother and son were trying to straighten out a ticket purchase and she repeatedly asked her son, “Do you really want to see this? Do you really want to see this?”

One sincerely hopes they stuck it out. Waters, the architect and co-founder of Pink Floyd, put on another spectacle that bounced across the realms of a rock concert, a musical theater production, and a political rally. And by the end of it, most who attended were glad they came.

Midway through his 23-song, two-hour-plus concert, Waters noted there were only patches of attendees up in the Nationwide Arena nosebleed sections. The 78-year-old singer mused wryly, “Well this may not have been a sell-out, but at least, we never sold out.”

Pink Floyd followers who decided not to attend the show may regret it for years to come. The theater-in-the-round staging of the show was brilliant. By placing the stage in the middle of the floor of Nationwide Arena, the audience always had a musician performing right in front of them regardless of where their seats were.

Waters put together an excellent supporting cast of guitarists Dave Kilminster and Jonathan Wilson, bassist Gus Seyffert, keyboard player and guitarist Jon Carin, sax player Seamus Blake and backup singers Amanda Belair and Shanay Johnson as well as a stunning multi-media screen show. The band charged through the Pink Floyd catalog with Waters’ solo works dispersed throughout the setlist. Fittingly, a wave of audience produced smog descended around the stage as Waters opened the show with “Comfortably Numb.” He then followed that with “The Happiest Days of Our Lives” and “Another Brick in the Wall, Part 2 and Part 3” before throwing in “The Powers That Be” from his 1987 solo album “Radio K.A.O.S.” Waters and company closed out the first set with a quartet of can’t miss classics, “Have a Cigar,” “Wish You Were Here,” “Shine On You Crazy Diamond (Parts VI-IX)” and “Sheep.” During “Sheep,” the last song of the front end of the concert, a gigantic floating wooly dirigible was set free to bounce around the concert hall.

The sheep, a nod to the mindless followers of Snowball in George Orwell’s Animal Farm, was not the only floating farm animal to make an appearance. In the second half of the show, a soaring sow hovered above the crowd as the band powered through “In the Flesh,” “Run Like Hell,” “Money” and “Us and Them.”

While the show was a musical and visual masterpiece, it was not without a fair share of irony. This goes well beyond the fact Waters blasts greed on songs like “Money” and yet has ticket prices for his front row seats ranging in the four digits and concert jackets for sale for over $200.

Introducing the first part of his new song “The Bar,” Waters said he wanted this show to be like a neighborhood pub where people could gather and discuss the news of the day. And yet, before the show, an enormous message board announced, “If you’re here because you like Pink Floyd but you can’t stand Roger Waters’ politics, f*ck off to the bar.” It’s easy to have an open-minded exchange of ideas when you’re the only one holding a microphone.

Throughout the concert, the audience was exposed to images of politicians as diverse as Ronald Reagan to Joe Biden with accounts of their various “war crimes.” Underneath the picture of Barack Obama was the accusation that he increased the use of drone warfare. Later, Waters called for the end of the use of drones as weapons. However, both his flying sheep and pig were powered by … drones.

In a concert filled with images of police violence and nuclear war, perhaps the darkest moment was Waters’ parading in Gestapo-like gear to portray a character for the song, “In the Flesh.” The persona sings about “who let all the riff raff” into the concert hall and then he closes the song with the line, “If I had my way, I’d have all of them shot.” Then he took out a prop machine gun and open fired on the crowd. (Afterward, the audience applauded.) One concert goer joked with a friend, “I can’t imagine that going over well during his Berlin concert.” The friend retorted, “I can’t imagine that going over well … anywhere.”

Waters left the arena with his merry band marching through a section of the crowd, playing the fitting “Outside the Wall:” And some gathered together in bands/The bleeding hearts and the artists make their stand/And when they’ve given you their all/Some stagger and fall/after all it’s not easy/Banging your heart against some mad bugger’s wall.” Whether one agrees with Roger Waters’ politics or not, one truth remains firmly in place: the guy puts on an unforgettable show. 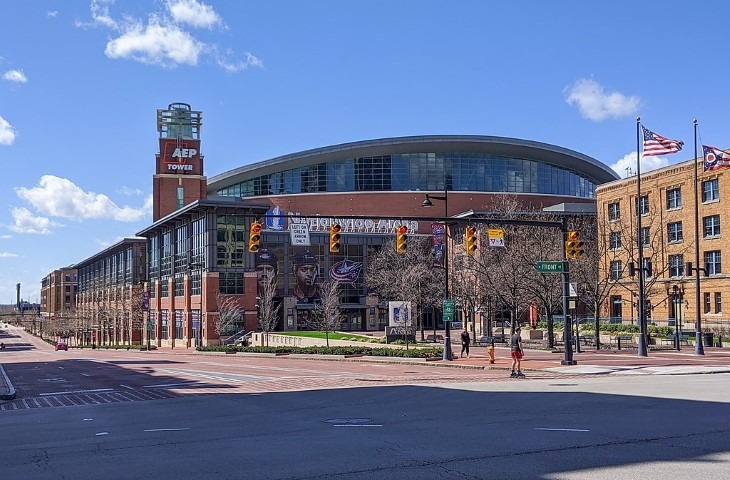 Nationwide Arena is a multipurpose arena in Columbus, Ohio, United States. Since completion in 2000, the arena has served as the home of the Columbus Blue Jackets of the National Hockey League (NHL). It is one of two facilities in Columbus, along with Greater Columbus Convention Center, that hosts events during the annual Arnold Classic, a sports and fitness event hosted by actor, bodybuilder, and former Governor of California Arnold Schwarzenegger.

Nationwide Arena was built near the site of the former Ohio Penitentiary, which had an eastern border of West Street. The arena itself is built over the prison’s former parking lot. The arena’s parking lot and an apartment complex are built where the prison formerly stood. The arena was constructed in 2000.