Bridgestone Arena in Nashville, TN hosted a legend this past weekend – progressive rock king, Roger Waters, on his This is Not a Drill tour.

Nashville Roger Waters fans wrapped around Bridgestone Arena and up Broadway waiting to get into the venue. A sea of Roger Waters tour shirts mixed with multigeneration groups in faded Pink Floyd merch. Everyone was showing up to catch this legend perform.

For almost two decades, Roger Waters was the frontman for one of the most iconic bands of all time, Pink Floyd. He was a founding member of the band, started in London in 1966, and penned many of Pink Floyd’s biggest hits. Waters left Pink Floyd in 1984, and he has gone on to have a thriving solo career.

Inside the arena, the lights fell. The narrated announcement began to be read and shown typewriter style on the video screens. The telecaster made everyone aware that this wasn’t a night of sunshine and unicorns. In more PC terms, if you can’t handle Roger’s politics, you’re in the wrong place, and should probably find the nearest exit.

“Comfortably Numb” softly and eerily opened the show, but there was a thick feeling in the air we were in for something incredible. The crowd was totally silent and the suspense of Roger emerging was tangible in the blue light haze. The massive video screens that created a large cross intersection in the center of the arena, began to lift amid soaring female vocals. Roger waded through the crowd and emerged beneath red lights on the far catwalk of the stage to sing “The Happiest Days of Our Lives.” Instantly giving fans what they’ve wanted, Waters continued into “Another Brick in the Wall” which the crowd sang whole emphatically.

A reoccurring scene of the show was the whole band gathered around Roger playing piano. “The Bar” was beautifully crooned with a few other tracks. Meanwhile, the screens showed politically infused call-outs regarding Standing Rock and presidential war crimes. Intermission fell, but not before an inflatable sheep drone flew through the stadium during, none other than, “The Sheep.”

The Nashville Roger Waters crowd jolted back into the political and philosophical world of Pink Floyd and The Wall when returning from their hotdog break. Red lights, red cross hammer flags, and guns rang out through “In the Flesh” and “Run Like Hell.” The fascist storyline of the album took over the area in a real way for those tracks. Green then flooded the show, and the iconic cash register sounds of “Money” began. It featured Seamus Blake playing a roaring saxophone solo. Roger and the band blessed the crowd with a slew of tracks from Dark Side of the Moon including “Us and Them,” “Any Color You Like,” “Brain Damage,” and “Eclipse.” The video screens and lasers created a stunning depiction of the classic Dark Side of the Moon prism and rainbow in a truly incredible production moment.

Meeting back at the piano, Roger Waters and the band played more of “The Bar.” An unreleased Roger Waters track rumored to have up to ten verses, it tells the tale of two women, one homeless and one a Lakota Sioux who helps the first.

This song transitioned into a snare drum-led march around the stage where Roger honored and thanked each of his band members, and the crowd, in the most warm and genuine way. They all paraded off stage together still playing and singing. A camera followed and they finished their final number in the tunnel, playing and singing for each other. A private moment, just for them, that we were allowed to enjoy.

There was something extraordinarily special in the air Saturday night at the Bridgestone Arena. The tour continues through October in the United States. Catch one of the upcoming This is Not a Drill Tour stops to experience it for yourself! 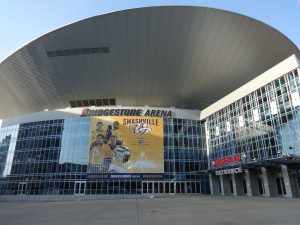 Bridgestone Arena (originally Nashville Arena, and formerly Gaylord Entertainment Center and Sommet Center) is a multi-purpose venue in downtown Nashville, Tennessee, United States. Completed in 1996, it is the home of the Nashville Predators of the National Hockey League.

Designed by HOK Sport in conjunction with the Nashville-based architecture/engineering firm Hart Freeland Roberts, INC., it was designed at an angle on the corner of Broadway and 5th Avenue in Nashville in physical homage to the historic Ryman Auditorium, the original home of the Grand Ole Opry.[6]

Bridgestone Arena is owned by the Sports Authority of Nashville and Davidson County and operated by Powers Management Company, a subsidiary of the Nashville Predators National Hockey League franchise, which has been its primary tenant since 1998.