Roger Waters came out swinging Wednesday, at his big and bold tour opening show in Pittsburgh. Even before taking the stage, he beat critics to the punch.

“If you’re one of those ‘I love Pink Floyd, but I can’t stand Roger Waters’ politics’ people, you might do well to, (swear word) off to the bar right now.”

Many in the decent-sized, but nowhere near sold-out PPG Paints Arena crowd laughed and cheered.

The concert, with an in-the-round setup, commenced with one of Waters’ biggest Pink Floyd songs, “Comfortably Numb,” sung in a heavy, far-away tone, with the melody more stripped down, gradually intensifying the guitar and keys ambience. Dark lighting and a gigantic perpendicular wall with dystopian imagery filling the stage made it tough to tell how much of that song was performed live.

With helicopter sound effects blasting from the surround-sound speakers, the wall then lifted and turned into four gigantic video screens as Waters emerged, wearing head-to-toe black, joined by nine bandmates all identically mono-chromed, ripping into “Happiest Days of Our Lives,” “Another Brick in The Wall, Part II” and “Another Brick in The Wall, Part III,” a beloved mini-suite from Waters’ largely autobiographical Pink Floyd masterpiece, “The Wall.” Waters then picked “The Powers That Be” as the video screens referenced victims of police brutality. Waters’ backup singers, Amanda Belair and Shanay Johnson, gave the song extra emotional heft.

Many spectators booed as Ronald Reagan popped up on the screens as part of the preface to “The Bravery of Being Out of Range.” By song’s end, the English-born Waters, via video screen messages, would denounce as a “war criminal” every full-term U.S. president since and including Reagan. President Biden’s face popped up, with the pessimistic message “he’s just getting started.” At the end of that song, Waters, playing piano, let out a sigh of relief and pounded his chest with his right fist, in a “thank you” gesture to fans for their support.

Waters introduced a new, pandemic-spawned song “The Bar,” joking it wasn’t the same bar that fans had fled to “because they don’t like my politics.”

Still at the piano, Waters emotionally sang lines like “we’re trading the family farms for some snake oil,” as the video screens transitioned to support of Native Americans being pushed from their land. “The Bar,” and its sentiments, earned a loud audience cheer. “Enough with our current predicament,” Waters said, pledging to take fans far back in time, launching a sequence with “Have a Cigar,” “Wish You Were Here” and “Shine on You Crazy Diamond” all from Pink Floyd’s 1975 album.

Waters did an amiable shrug for the “by the way, which one’s pink?” punchline in “Have a Cigar,” and arched his feet as his launch sequence to nail the “riding the gravy trainnnn” part. His voice hasn’t changed much, maybe a bit softer, and there would be a few concessions to his 78 years, as on “Run Like Hell,” where he let the backup singers and fans handle a few vocal lines. “Wish You Were Here” brought touching memories via video screen of Waters’ Pink Floyd co-founder, the late-Syd Barrett. Waters said they decided to form the band after witnessing a Rolling Stones performance. Waters’ pre-recorded narration, matched with words scrolled onto the video screens with a typewriter sound effect, alluded gently to Barrett’s mental issues, escalated by psychedelic drug use, which drove him out of the band. “When you lose someone you love,” Waters said in the narration, “It does serve to remind you this is not a drill,” (The 2022 tour is called This Is Not a Drill.) Waters, strumming acoustic at a far end of the stage, soaked it in as fans loudly sang a verse of “Wish You Were Here.”

The instrumental parts of the Barrett-inspired “Shine on You Crazy Diamond” were a highlight of the first set; a hypnotic and harrowing amalgam of swirling keys, psychedelic lap steel guitar, twin electric guitars and drum pounds from Joey Waronker who was a bit too reined-in on other songs.

“Sheep,” from Pink Floyd’s Orwellian “Animals” album, mightily ended the first set, a full-throttle, razor-sharp jam by the solid band including guitarist-vocalist Jonathan Wilson, Jon Carin on guitars and keys, Roland Walter on keys, and rhythm guitar from Dave Kilminster (who played in Waters’ 2012 Pittsburgh arena concert ). A number of fans clapped as the video screens showed tweets opposed to the Supreme Court’s recent overturn of Roe vs. Wade. Caught up in the music, Waters played air drums, flashed the peace sign and did triumphant fist pumps at the song’s end.

Near the conclusion of a 20-minute intermission, one of Waters’ trademark inflatable pigs began flying above the crowd bearing fascist statements criticizing the poor. Then on cue, Waters re-emerged in a knee-length leather jacket and mirrored sunglasses, portraying the fascist dictator antagonist from Pink Floyd’s “The Wall” movie, as he theatrically sneered the lyrics to “In The Flesh.” He finished the song, still in evil character, shooting a very realistic-sounding toy machine gun at the audience.

Waters’ vocals sound labored on “Deja Vu,” a song bearing pro-transgender, pro-reproductive rights, and pro-Palestinian messages, and his voice got overpowered in the atmospheric guitar and keys mix of “Is This The Life We Really Want?”

He got to focus on his bass playing for those meaty riffs that power “Money,” Floyd’s “The Dark Side of The Moon” epic complete with saxophone and surround-sound cash register noises. Another “Dark Side” classic, the anti-war “Us and Them,” slowly unfurled and emotionally roused, with Waters doing a dramatic arm wave gesture for the “And who’ll deny it’s what the fighting’s all about?” line.

The standard “Dark Side” pairing of “Brain Damage” and “Eclipse,” with great, stinging guitar strains, earned a standing ovation.

Basked in red lighting, Waters strummed an acoustic guitar for the nuclear war cautionary tale “Two Suns in The Sunset.” It was that rarest of anti-apocalypse songs that included sax.

“It feels good to sit down,” Waters said, thanking the audience for turning out to a show that the pandemic had postponed for two years. He smiled and said his wife was in the audience.

For an opening night, there were only minor glitches; an unpolished start on the new song, maybe some pacing issues that can be easily tweaked. Many seating aisles had strings of two or three empty seats.

As with his 2012 tour, Waters finished with “Outside The Wall,” the quietest song from “The Wall,” featuring a light accordion as the band huddled together and Waters introduced them one-by-one with their names in big letters on the video screens.

Pink Floyd fans will enjoy this show. Unless they detest Waters’ overt political remarks, but at least he’s warned them ahead of time. 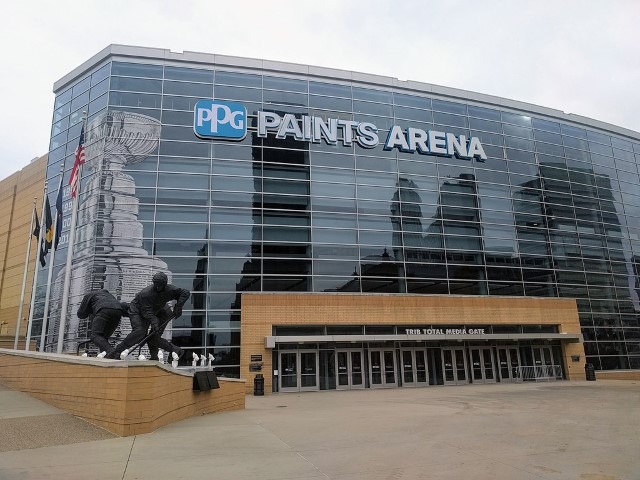 The arena is the first Leadership in Energy and Environmental Design (LEED) gold-certified arena in both the NHL and AFL.Soon after the arena opened in 2010 it was named “Best New Major Concert Venue” in the Pollstar Concert Industry Awards and “Best NHL Arena” in the Sports Business Journal reader poll.