During the “The Trial,” the broken Broadway-style tune near the end of “The Wall,” Roger Waters wandered and skipped about the stage ranting and singing all of the parts in different voices.

The 8,500 square foot wall behind him showed the familiar animation from this section of the 1982 film. It was an unusual moment in last night’s concert at the Rose Garden in which the stagecraft relied mostly on Water’s hands, face and voice. He appeared to be having a blast.

For most of the more than two hours he was on stage, Waters was something above a frontman or a rock singer. He was the host of an elaborate and astonishing production, many elements of which could tour as art exhibitions on their own.

As the show got rolling with “The Thin Ice,” images of casualties of war from the last 100 years slowly filled the bricks of what was, at that point, a half-assembled wall. Next, 15 kids from Portland’s Sound Roots Kids Rock Choir ran out on stage in shirts that read, “Fear Builds Walls.”

The images of tragedy followed by the unbridled excitement of the 10-15 year olds — who rehearsed with and personally met the Pink Floyd founder and former bassist earlier in the day — was an emotional roller coaster. The crowd was already transfixed when an enormous puppet of a teacher/boogie man with laser eyes descended and looked unlikely to “leave those kids alone.”

In addition to singing as masterfully as ever, the 78-year-old Waters launched a propaganda blimp, shot up the crowd with a very realistic-looking fake assault rifle, and at one point was lowered from the middle of the wall in a living room set.

While acts like U2 and Lady Gaga bring theatrics of similar scale to stadiums, “The Wall” has a narrative that lends itself to this setting perfectly. By the time the central character, Pink, becomes a neo-fascist, the crowd has been made to feel small by the towering real-world and imaginary monsters before them. The projected hammers thunderously marching the width of the stadium seemed to outnumber the humans, who filled the venue’s more than 15,000 seats.

The story, which includes some autobiographical elements as it follows Pink’s life from boyhood, seems now almost incomplete without his aged and content version presenting it. At one point, Waters sang and played along with massively projected black and white footage of himself performing “Mother” 30 years ago. It was just the two of them up there and the decades, admiration and forgiveness between them. That moment, and the show as a whole, was a case of technology and artifice enabling great emotional depth. 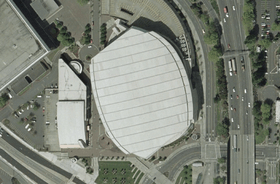 The Rose Quarter is a 30-acre (12-hectare) sports and entertainment district located in Portland’s Lloyd District on the east bank of the Willamette River, just east of downtown. The Rose Quarter is bounded on the west by NE Interstate Avenue, on the north by NE Broadway and NE Weidler Streets, on the east by Interstate 5, and on the south by NE Holliday Street. The site contains two multipurpose arenas, the Moda Center and the Memorial Coliseum. Nearby landmarks include the Steel and Broadway bridges, the Oregon Convention Center, and the Eastbank Esplanade.

The Moda Center is a 785,000-square-foot (7.29-hectare), 19,980-seat multipurpose arena. The arena is divided into two major sections, an upper and lower bowl, separated by a level of luxury boxes. The arena opened in 1995, and is the current home of the Portland Trail Blazers of the National Basketball Association. The Moda Center previously hosted home games for the Portland Winterhawks of the Western Hockey League, and the Portland LumberJax of the National Lacrosse League. It is also used for concerts, circuses, rodeos, ice shows, and conventions.