Roger Waters doesn’t mince words and he certainly wouldn’t do so in a bland fashion. For years now, Pink Floyd’s coveted songwriter and bassist has used his platform — in person, on stage, in front of tens of thousands — to mend cornerstone Pink Floyd records with solo ventures, all under the craziest, most extravagant audio-visual displays. Last Tuesday night was no different — Waters made certain a packed Ball Arena enjoyed his presentation of the “This Is Not A Drill” tour, and felt his anger towards a number of socioeconomic problems.

A colossal t-shaped video board — with pixels stretched the entirety of the apparatus — rose from ground level during Water’s introductory song, “Comfortably Numb.” The stage, placed smack-dab center of Ball Arena, revealed a vast ensemble of at least nine characters: guitarists, backup vocalists, synthesizers, keyboardists, bass players and a drum kit marking the venue’s true epicenter. And of course, there was Waters, who jumped straight into his former band’s most recognizable hit, “Another Brick In the Wall, Pt. 2.” Next, the audience got their first true taste of Water’s unflinching dedication to the statement. During a heavier rendition of “The Powers That Be,” names subject to police brutality cycled on the screen including Colorado’s Elijah McClain, and most harrowing, Philando Castile, whose video and audio from the unarmed murder could be heard blaring over chugging guitar chords. The politically drenched psych-rock didn’t cease for a moment. During the following record, U.S. presidents beginning with Ronald Reagan were splayed across the screen. “Clinton killed 500,000 Iraqis with sanctions,” or “Obama and Trump normalized the use of drone strikes,” and “Reagan killed 30,000 innocents in Guatemala.” Each commander-in-chief’s face was blood red, with the words “WAR CRIMINAL” plastered over them.

“The Bar,” a solo track played mostly on piano by Waters, worked as both a sentimental record about the positive power of exchanging ideas in conversation, as well as a moment to shed light on the Lakota Sioux pipeline qualms. Flyover footage of protests against “the black snake” was played in black-and-white.

On the first act’s back end, the crowd roared in approval upon hearing the opening notes of “Wish You Were Here.” Water’s treated the record like an homage to Syd Barrett — his right-hand man in the band that set the world on fire. Funny stories were scrawled in default text on the video boards, all while thousands sang the chorus with Waters in beautiful harmony.

The second half of the show began with a complete theme change. Banners unraveled from the rafters, revealing an emblem of two hammers in a cross formation. Waters reemerged from intermission wearing a black trench coat and a red armband and marched along the border of the giant stage with two men in riot gear trailing him. Huge inflatable pigs and sheep flew just above spectators’ heads. At the tail end of one of the first songs back out, “Run Like Hell” — a staple Pink Floyd track off The Wall — Waters fired a fake MP-40 machine gun into the crowd.

Perhaps the biggest highlight of his second act came when he performed “Money.” As soon as the trademark cash register noises began, a show whose lights were almost entirely red, white and black turned a vibrant money green. Virtual coins and dollar bills rained down on the screens, and a saxophonist came out to play the record’s unforgettable solo.

Another Dark Side of the Moon moment came just a few songs later, with an emphatic “Brain Damage.” Waters blended everything nicely at Ball Arena on a Tuesday night: solo songs, Pink Floyd classics and deep cuts, a couple of brief monologues, and a whole bunch of media extravagance — all while keeping his foundation clear: Roger Waters will never, ever stay silent. 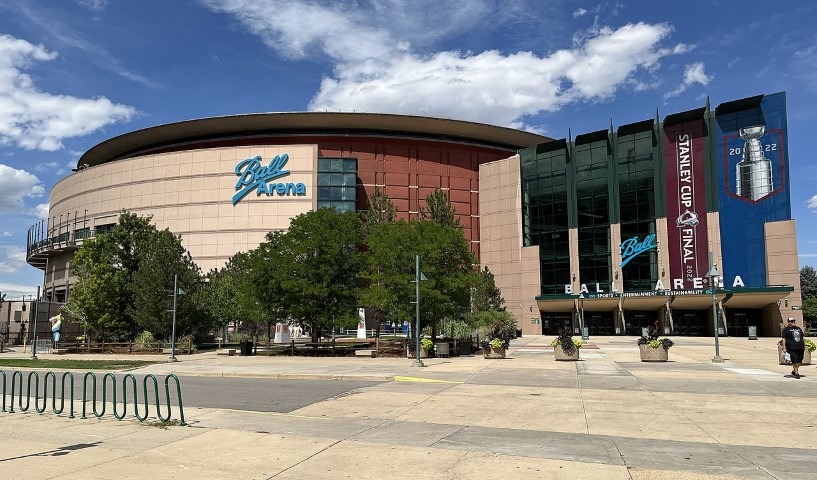 Ball Arena (formerly Pepsi Center) is a multi-purpose arena located in Denver, Colorado. It is situated at Speer Boulevard, a main thoroughfare in downtown Denver, and is served by two nearby exits off Interstate 25. A light rail station is on the western side of the complex. Opened in 1999, it is the home arena of the Denver Nuggets of the National Basketball Association (NBA), the Colorado Avalanche of the National Hockey League (NHL), and the Colorado Mammoth of the National Lacrosse League (NLL).

From its opening through 2020, the naming rights to the arena were held by PepsiCo, under which it was known as Pepsi Center. On October 22, 2020, the naming rights were sold to Westminster-based Ball Corporation as part of a global multi-year agreement with Kroenke Sports & Entertainment (KSE), which also makes it the exclusive “sustainability partner” of the arena. As part of the agreement, all KSE-owned sports teams and venues will employ recyclable aluminum products provided by Ball to reduce plastic waste, with Ball Arena to transition to serving concessions in aluminum packaging by 2022.