By way of introducing the show, a disembodied voice, fresh off intoning notifications of the time remaining before the start (“Ladies and gentlemen, the show will begin in ten minutes’ time.”), then urged, “If you’re one of those ‘I love Pink Floyd but I can’t stand Roger’s politics’ people, you might do well to fuck off to the bar right now.”

This message seemingly went unheeded, as, at various points throughout the show (Ronald Reagan’s face displayed with the words “War Criminal” superimposed or Samuel DuBose’s name with the words, “Location: Cincinnati, Crime: being black, Punishment: death” come to mind), people were seen leaving in disgust, never to return to their seats.

They can’t say he didn’t warn them. 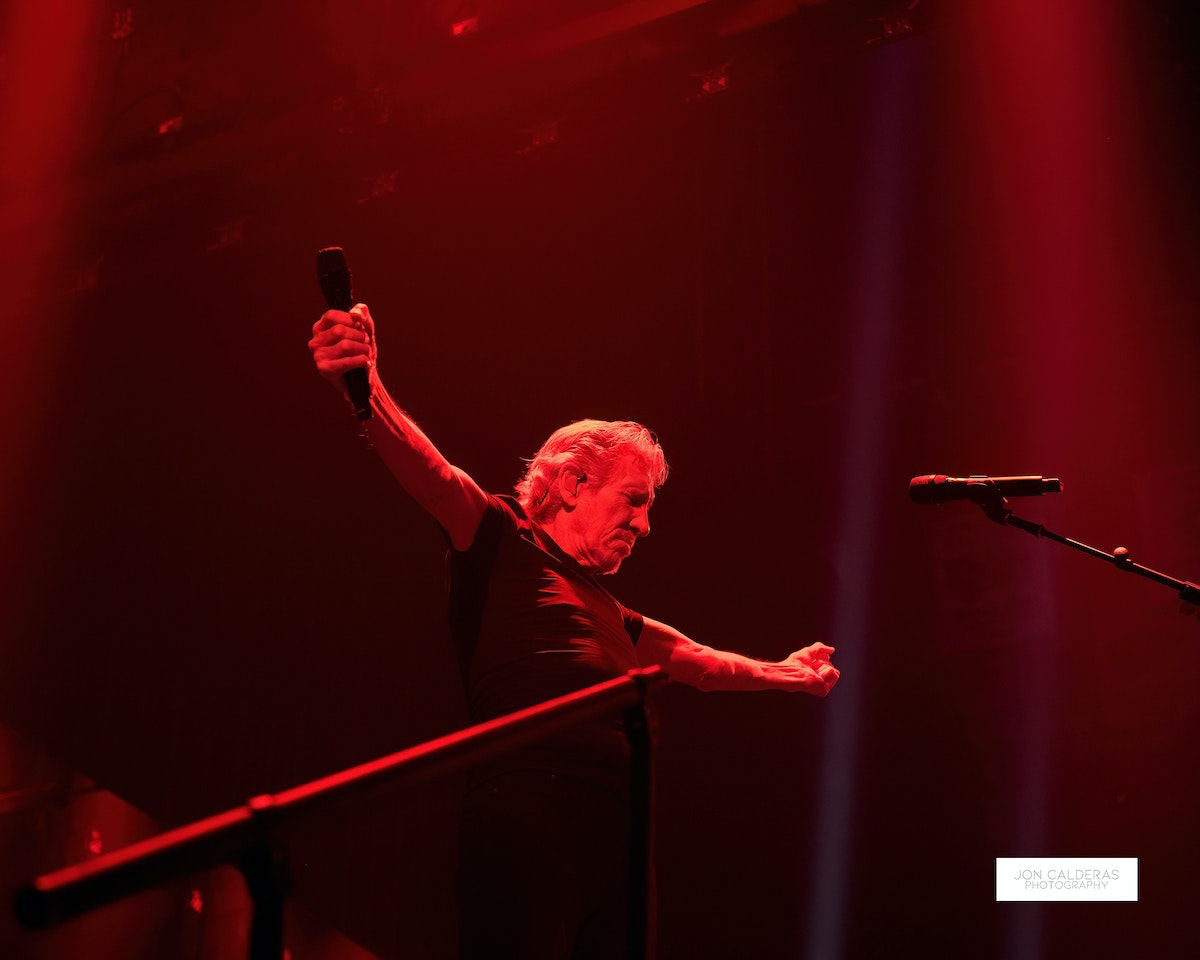 Beyond Waters’ political opinions, the erstwhile Floyd bassist presented one of the more breathtaking spectacles in recent memory. Presented “in the round” – or more accurately, “on a big, elongated plus sign” – the stage, and accompanying screen suspended above it, filled the space at Heritage Bank Center, thoroughly saturating the arena with color and sound and, most importantly to Waters, very poignant, very clear messaging, delivered with a number of fucks on par with a viewing of The Big Lebowski.

Indictments of many of society’s ills, according to Waters, were laid plain throughout the concert, with the bulk of the heavy lifting on that front taken up by words presented on the massive suspended screens. The words “Fuck the Supreme Court” in 10-foot letters garnered some of the loudest acclaim of the night, along with “Fuck the patriarchy” and “Fuck drones.” Supporting Waters’ messaging was a somewhat ambitious setlist performed ably by the 78-year old, moving deftly between guitar, bass, and piano, and often simply singing and allowing his stellar band to do what they do best. 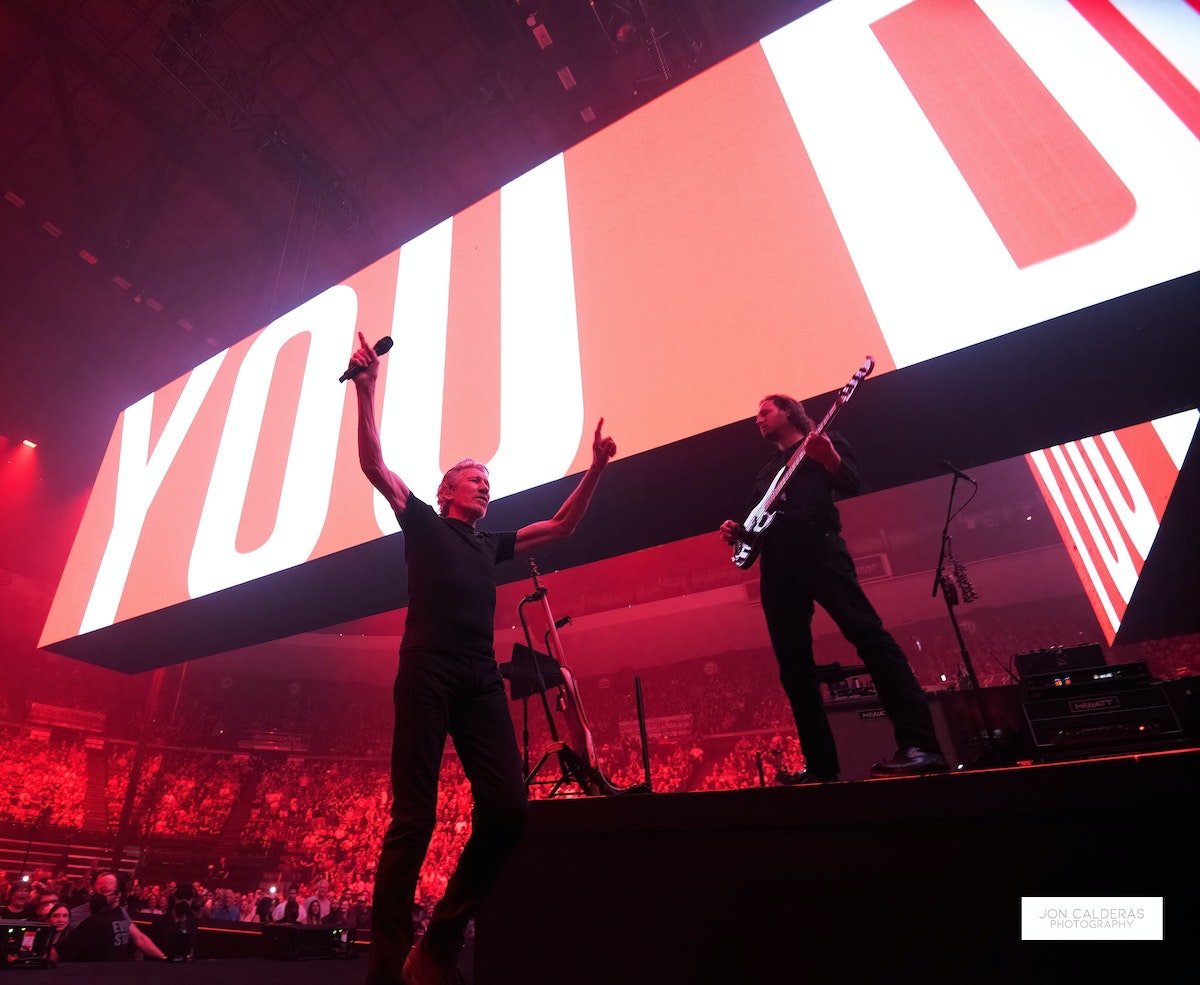 Pink Floyd classics like a reimagined “Comfortably Numb,” “Wish You Were Here,” “Shine On You Crazy Diamond (Parts VI-IX),” were interspersed with Waters’ solo work like “The Powers That Be” and “The Bravery of Being Out of Range.”

After a brief intermission, during which a large, inflatable pig inscribed with “Fuck the Poor” on one side and “Steal From the Poor, Give to the Rich” on the other flew around the arena, a guitar began “In the Flesh” from The Wall, as giant banners suddenly appeared, bearing the “hammer” symbol from the film, as Waters, dressed vaguely like an SS officer and followed by two “storm troopers” in riot gear followed. While a parody of the “alt-right,” it was clearly intended to make the audience uncomfortable; a garish visual attack to drive home how Roger Waters feels about nazis (hint: he’s not a fan).

The inclusion of “Money,” as well as several visuals decrying corporatism and consumerism, seemed at odds with $60 t-shirts and $30 bandanas, but the performance was so stunning, as well as being the starting point for a run-through of the second half of Dark Side of the Moon, that somehow it didn’t feel like an imposture. 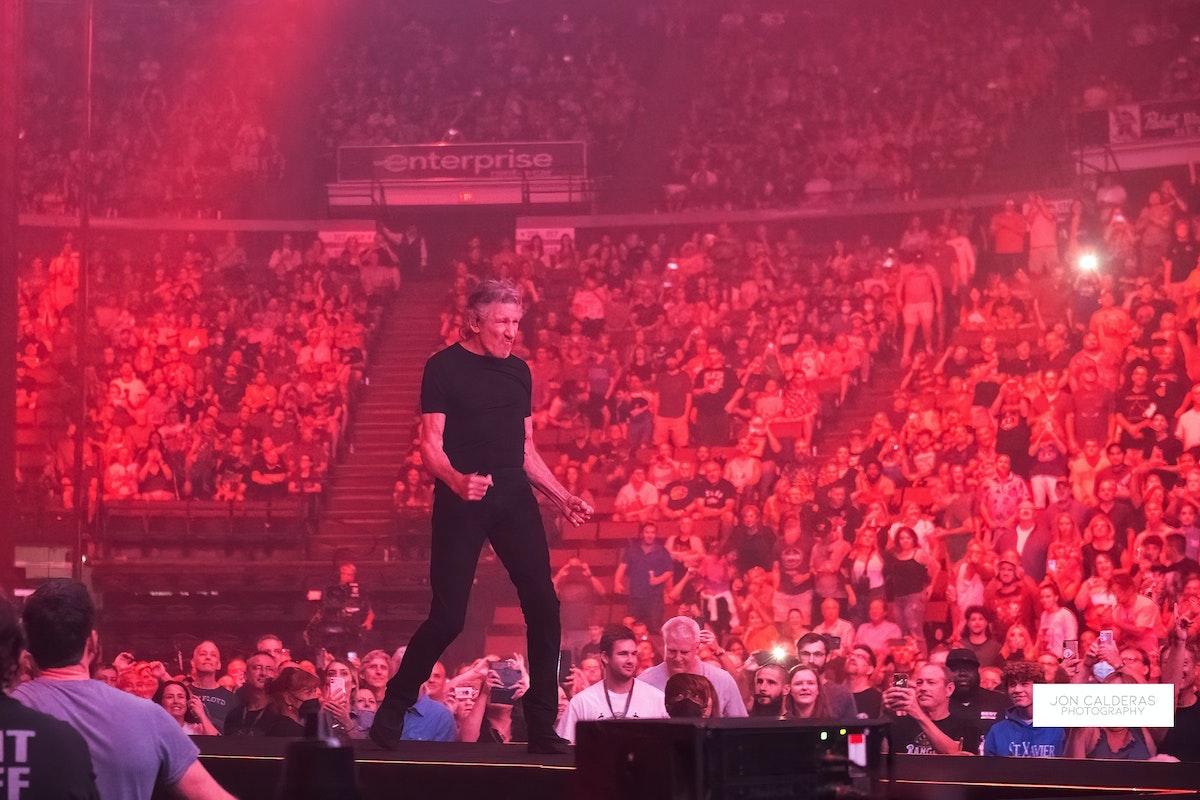 Noticeably absent from the entirety of the show was any mention of long-time Pink Floyd bandmate David Gilmour, with whom Waters famously has feuded since before he left after recording their final album together, fittingly called The Final Cut. The degilmourization of the evening was most stark in the opening rendition of “Comfortably Numb,” wherein all of the “guitar hero” moments Gilmour was known for were replaced by vocalizations and keyboard solos. Clearly, Roger Waters and David Gilmour are still at odds.

In all, Waters reminded everyone over the course of nearly 2 1⁄2 hours why he is in the Rock & Roll Hall of Fame. He may sing some of the songs in a lower key now, and may rely a little more heavily on his band to drive the music, but the man who helped shape a generation of music, and influenced generations to follow, showed us all how it’s done.

Will Taber got in touch recently to share his correspondence

“At the August 2, Cincinnati show, I had the opportunity to exit the facility via the load out dock, on the west end of the venue. On the dock were numerous crates with Roger’s stage setup identified by a coding system, to facilitate the crew loading and unloading. Attached is a photo of one of these that I took. 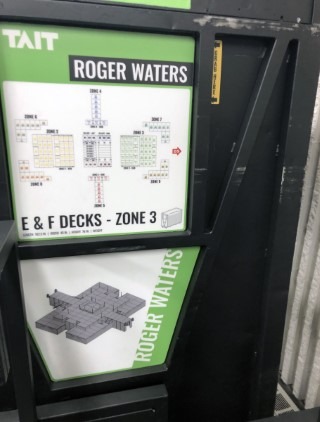 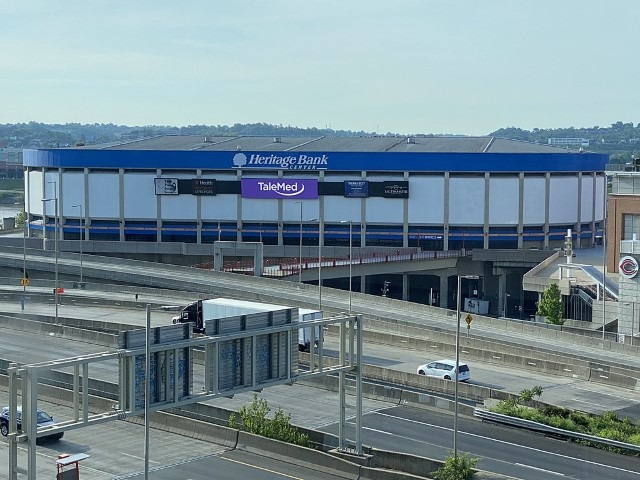 Heritage Bank Center is an indoor arena located in downtown Cincinnati, next to the Great American Ball Park. It was completed in September 1975 and named Riverfront Coliseum because of its placement next to Riverfront Stadium. In 1997, the facility became known as The Crown, and in 1999, it changed its name again to Firstar Center after Firstar Bank assumed naming rights. In 2002, following Firstar’s merger with U.S. Bank, the arena took on the name U.S. Bank Arena and kept that name until 2019.