Midway through his introduction of “Two Suns in the Sunset,” the penultimate song of Roger Waters’ performance at Crypto.com Arena in Los Angeles on Tuesday, the Pink Floyd singer and bassist stopped himself.

“I’m not going to blather on because I don’t want to get a reputation for making political speeches at rock concerts,” Waters said with a wry grin.

The audience laughed and cheered because a Roger Waters concert is nothing if not politics made personal, as the music of the 78-year-old singer-songwriter has made clear for decades now.

“Two Suns in the Sunset” – “a rather gloomy song because it’s about nuclear war,” as Waters noted moments earlier – is a perfect example.

It’s a beautiful song, hauntingly so given the subject matter, a track from 1983’s “The Final Cut,” the final Pink Floyd album before Waters left the band.

It’s a warning, and a call to save humankind and the planet before a nuclear folly destroys it all – also a topic on the minds of many today given the war in Ukraine and the threat of Russia using its nuclear weapons.

And indirectly, it’s the cause behind Waters’ most recent off-stage political controversy, an open letter written to the First Lady of Ukraine this month, calling on that country to stop the fighting. She wrote back, telling him more or less to take it up with Russian leader Vladimir Putin, which prompted a second open letter to him. The musician’s upcoming concerts in Poland were canceled following the exchange.

So yeah, Roger Waters is a political person, and you may agree or disagree with his views, but you can’t say he’s not willing to share them, as he noted in a cheeky bit of text posted to the video screens moments before the show began:

“If you’re one of those, ‘I love Pink Floyd, but I can’t stand Roger’s politics’ people – you might do well to (bleep) off to the bar right now,” it read as the crowd cheered the sentiment.

Otherwise, Waters’ This Is Not A Drill tour kept the gorgeous songs and performances at the center of the show throughout the 24 songs he and the band played over two hours and 40 minutes.

The night opened with Pink Floyd’s “Comfortably Numb,” as the massive video screens that hid most of the stage displayed scenes of a post-apocalyptic cityscape, skyscrapers with blown-out windows, and dazed people wandering the streets.

As always with Waters, the production design was spectacular. This is his first tour performed in the round. The band was centered on a stage with cross-like ramps extending into the audience on the floor to allow the singer to perform at different times to each side of the arena.

After the dream-like ethereal “Comfortably Numb,” the video screens lifted to reveal Waters and the band as the thunder of helicopter blades beating echoed from every corner of the arena and spotlights crisscrossed the crowd.

More songs from Pink Floyd’s “The Wall” followed, including “Another Brick In The Wall, Part 2,” a No. 1 hit in both the United States and United Kingdom, at which point politics-schmolitics, this was a terrific show regardless of your views.

Though his solo material only provided seven songs in the set, it held up alongside the better-known Pink Floyd Material. “The Powers That Be” focused on the victims of oppression, displaying the faces and names of victims that included George Floyd and Mahsa Amini, the Iranian woman whose death in that country sparked demonstrations this month, among them.

A new song titled “The Bar” slowed down the tempo as Waters played piano after explaining his concept of “The Bar” as a place where people of different backgrounds and beliefs can gather and “communicate with each other like human beings.” He said the song was 15 minutes long, though he didn’t plan to play all of the still-unreleased track, instead focusing on a portion that tells of a homeless Black woman who is befriended by a Lakota Sioux, maybe fresh from the protests at Standing Rock, who brings her to the bar where the people there care for her.

The middle of the show was perhaps the most personal, jumping back to the earliest days of Pink Floyd, and particularly Waters’ close friendship with co-founder, the late Syd Barrett. A mini-suite of songs from 1975’s “Wish You Were Here” – “Have A Cigar,” the title track, and “Shine On You Crazy Diamond, Parts VI-IX” – were huge crowdpleasers, the latter two prompting massive singalongs.

After a brief intermission, the show resumed with a pair of songs from “The Wall” – “In The Flesh” and “Run Like Hell” – and “Déjà Vu,” another very good solo track from his 2017 album “Is This the Life We Really Want.”

But its highlight by far was the performance of the entire second side of “Dark Side of the Moon” in order, starting with “Money” and “Us and Them,” and slipping through “Any Kind Of Colour” to end with “Brain Damage” and “Eclipse.”

You got a little bit of everything in that run. Slogans – “(Bleep) the Supreme Court” and “(Bleep) guns” got the loudest responses – and production design – the prismatic triangles from the “Dark Side of The Moon” album were recreated as eight laser-beam replicas that wrapped around the massive video screens.

Then, after another round of “The Bar,” this time with the entire band standing there for a drink – whiskey, mezcal, and, for Waters, bottled water – the ensemble marched around the entire stage, off and through the crowd to the exit tunnel while singing Pink Floyd’s gentle, folky “Outside The Wall.”

Waters billed This Is Not A Drill as his “first-ever farewell tour,” which is probably – probably – a joke about how often rock stars say they’re hanging it up only to pop back out a year or two later. Let’s hope he’s not serious because Tuesday was proof he’s plenty more to say and sing. 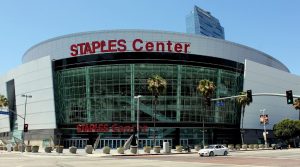 Crypto.com Arena is a multi-purpose arena in Downtown Los Angeles. Adjacent to the L.A. Live development, it is located next to the Los Angeles Convention Center complex along Figueroa Street. The arena opened on October 17, 1999; it was known as Staples Center until December 2021 when Singapore-based Crypto.com acquired the naming rights.