All pictures from this show have been kindly supplied by Joe & Los Hermanos Reyes. 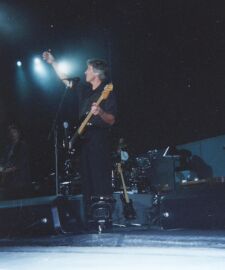 Someone stick a fork in me……6:00 AM. F*ck. Three hours ago I had made my way back to my hotel room here in Vegas and promptly crashed. What a night it had been. The gathering at Ricardo’s, the mood adjustment session at PLS’s hotel room, the show,…..man, the show. And then running into most of the band…unbelievable. But a new day dawned and I had a schedule to keep. It was then I noticed Sgith, crashed herself, on the other bed. Guess there wasn’t two rooms on my original reservation. Priceline.com blows. Still like Shatner, though. “Convoy!” My mind’s still got a foot in dream world. I giggle to myself. “Sgith!” “Huh…..?” “”You’re dreaming” “what…? “Wake up, you’re dreaming. It’s time to go….” “k….” Ten minutes later, we’re humming down the I-15 toward San Diego. The desert is already bright and warm, the morning light securely tucking away the night’s events into a cherished memory. An uneventful five hours later we cruise into town, relax for a couple of hours, and it’s off to work for me, pulling a 3-midnight shift just to follow that up with a 6 am-3pm shift the next day, all so I could see Roger perform at the Coors Amphitheatre in San Diego that evening. I remind myself of the hours spent on the perimeter, the 72-hour missions, the focus trained on what needed to be done in the days I was a soldier. Lack of sleep…hah! Suck it up and drive on. By the end of my shift, I was amped. I raced home and waited for my friends John, Nick, Frank, and Marc, while Sgith sat in my room mainlining the Internet through my computer. Everyone was soon congregated at my place and we all headed down to the venue. I was happy for a lot of reasons. This would be the first time my friends would see Roger perform, and as for my friend John, well, I have tried to broaden his musical horizons a bit. Being somewhat sheltered musically growing up, I took him to see his first concert a year and a half ago. Jimmy Page and Robert Plant at the Hollywood Bowl in LA. Had to start him off right! Now I was taking him to see Roger and baptize him in a pool of holy writing. We cruised into the parking lot, had a beer or two, and unsuccessfully tried to sell two extra tickets. Sgith and I were a little bummed at the lack of buyers, but at least we each have a full ticket to frame! We made our way to our seats and relaxed. While my friends were sitting there waiting for us to sell the extra tickets, a very inebriated woman tried to make her way down the aisle behind ours. She had a beer in one hand a clear row of seats to negotiate, yet she still managed to trip and fly over the back of the seats into the row behind her, flinging beer two rows further beyond her point of impact. Luckily, Miss Budweiser missed dousing anyone. She immediately recovered, ungracefully, and went and got another beer. The show hadn’t even started! Some people. Later, I would run into her cousin, Jethro. We looked for FP and Dianna, but couldn’t find them. But by then it was too late,…… the show started. 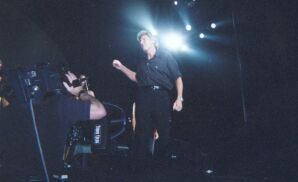 The band sounded great. The crowd was really into it. The opening set of Wall numbers had everyone on their feet and the sound was just awesome. We were sitting over to the right and the sound set up was 90% agreeable. Only during some parts were there problems with our physical location, but that’s coming up. When Roger sang “Mother” with Katie Kissoon once again on vocals, I was covered in goose bumps. Twice in two days and I was teary eyed again. I can’t get enough of that song. It is just a joy to listen to. Doylie, if I may use Pam’s cute little name for him, was again proving to be a wonderful asset to the band. I can’t really expound any more than I already have in my Vegas review about how well he and Snowy play well together and individually. I began to look for things this second time around that I was too overwhelmed to notice in Vegas. Roger seems to have shed his dour image compared to his persona during his previous solo tours. He was very animated and theatrical with the audience, especially during ABITW2, singing the lyrics with no mic to the fans seated off to the sides. 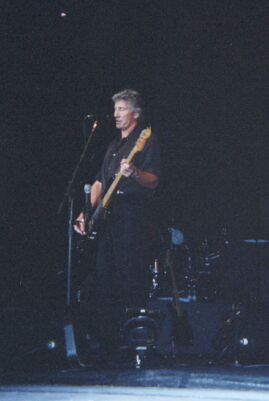 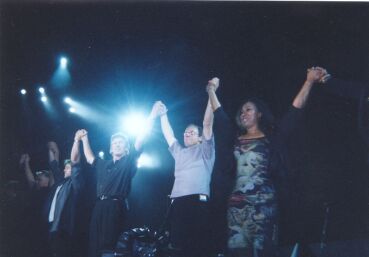 Wow. Each Small Candle was almost up and I think this is where Roger stood, said thanks, for coming and thanks for listening, and he stood there as the applause roared and wave built upon wave. No question which one’s Pink. I was happy for him. The band then kicked in Each Small Candle……and then, It was over. We gathered ourselves, found Dianna and FP, and made our way home. I do regret not having hooked up with more ATD board members at the SD show. I believe Moo and others were there, and I’m sorry we didn’t meet. But there’s always the ESC tour…! Till then……… Lycurgus 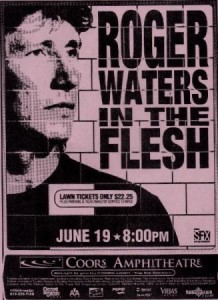