Pic taken as Roger arrived for the show. Thanks to Greg DowlesNightfern@aol.com

I won’t bore everybody by stating that Roger played exactly what he played at recent shows, but I will mention a few things which I had not heard of in previous reviews. One thing which CRACKED me up was after singing the line “Strings of a Viennese quartet rang across the room”, Roger started miming a violin player. And people say he doesn’t have a sense of humor…. He also did his DAMNEST to get people to sing along during “Perfect Sense”. Kinda surprised me after all the “Please LISTEN to the music” stuff on the web beforehand. Come that song, and Roger is by the side of the stage, waving his arms in the air, trying to encourage people to sing more loudly.

At the end of the show, Rog said something like “Thank you for LIS-TEN-ING. There was a real magic in the early days of Pink Floyd, and I certainly felt it here tonight”. He may have said that every night during the tour, but I didn’t hear about it.

The band was tight, except I think the soundperson missed their cue for the last solo in WYWH. There was none which could be heard.

The biggest surprise of the evening…… WHAT THE HELL kind of fire breathing monster has “Each Small Candle” turned into? God! The song has been getting harder and harder edged each show this tour, but this was ridiculous! The version played in Providence had an almost “In the Flesh” feel to it.. Freaking awesome!

My only complaint is that the quad sound system was turned 90 degrees from the KAOS setup. The way it was before provided MUCH better stereo separation. Still better than most acts systems, though.

In the program, Rog stated that if the tour goes well and he enjoys himself, he will go out on tour again soon. Well, at the end of end of this show, after the “early days” comment, Roger stated “See you NEXT TIME”, with a big smile on his face. Hopefully it is less than 12 years until we see our friend Roger once more.

Thank you Roger. See you NEXT TIME.

Thanks to Jim Maynard

Having the privilege to see this incarnation of Roger Waters 3 times now I have come to to conclusion that the band is just fantastic but they look and at times play like robots.

The crowd in Providence was by far full of ignorant stoned people making fools of themselves. My 15th row floor seat enabled me to take full advantage of the quad sound. Dogs was great. Perfect Sense was the best song and it helped me to realize that Roger is a genius and he should have done a tour for ATD as the album is simply stunning.

I hope the new album is equal. Over all I enjoyed the show but would like to see an all Roger show. A show that might bring the band to life instead of sleepwalking through the greatest hits of Pink Floyd. Lets hope the other band does not come back again with an incredibly lame album under the name Pink Floyd. Without Roger there is no Pink Floyd. If they do let them cover the hits.

Thanks to James C. Price natural-mystic@email.msn.com

April 1st, tickets to Roger Waters In The Flesh 2000 at the Providence Civic Center in Providence, RI, go on sale…I stay by my phone from 9AM to 1PM hitting redial to try and get through to Ticketmaster. Finally I got through! “Would you like best available seating?” the clerk says. I respond yes…”Ok you have 5 tickets to Roger Waters In The Flesh section 236″ “236? Where’s that?” “upper arena” she responds. From then on I was bummin, I had waited a long time for this event to come and i wasn’t about to sit in upper arena as far away as you can get. So I searched online at scalping websites and i called around…finally i found this place called intertixx.com, i found 3 front section tickets, 14 rows back from Rog. $431 total but well worth it! So July 16th comes around…The most anticipated day of my 15 year life. Me and My friends pile into the car for a long 3 hour drive there from NH. We get there about 5PM, grab a bite to eat at some expensive Italian Mafia infested restaurant because it was the only place open on a Sunday! After that we walk down to the Civic Center, wait for about an hour or so…get in line and enter! I was amazed by how small the place was…a place Roger enjoys to play in. We walk to our seats down in front and i for one was very happy! 14 ROWS BACK!!! then we walk up to see how the section 236 seats would be…not that good. 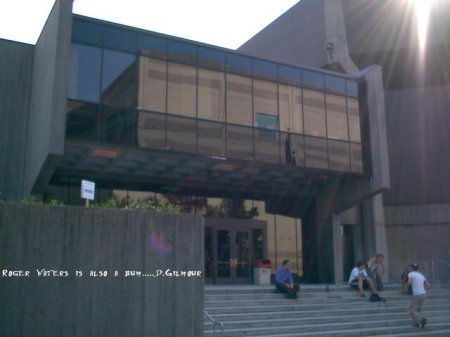 Front of the venue (This pic is also slightly modified) :-}

It was still 1/2 hour before the show and the place was already hazy! So we enter our seats to prepare for the show…lights go out! band enters the stage! i get goosebumps! an incredible feeling! graham Broad sets the beat and Roger picks up on it “aits neh blah aba!” and so Roger did his routine walk upon the platform on the stage, and right then i knew this guy was my hero, my idol. although the lightshow wasn’t all that great…they did take out the spotlights and threw them around the arena during In The Flesh, and yes of course everyone cheered at the line “and there’s one smoking a joint!”

From then on the whole thing didn’t seem real to me! The crowd really appreciated Roger and showed it. Roger repeated most of the same words he had said in previous shows but what’s a 56 year old man to do! He’s a great performer. At the end of the 1st set the lights went up for intermission and from my our seats you couldn’t even see the back of the arena if you know what i mean. Me and my friends went to get a drink and came back just in time for Set The Controls. I was really happy Roger decided to add this to the setlist! I thought the band did an excellent job during the DSOTM cuts..Jon Carin was awesome during Breathe, Graham Broad was awesome in his drum solo during Time, Roger Doyle Bramhall were awesome on the Time vocals…and Money, i had never liked this song much but after this i love it! Doyle Bramhall did awesome playing Dave’s parts and I think what capped it off for me was when Andy fairwhether came in with his guitar and rocked! picks flying in the air he was playing so hard. it was great!

Front Section at $140 a pop! Thanks to Adam Bassett Bassy8@aol.com

Then came Roger solo material which i was very familiar with and sang out loud most of the lyrics. You have to understand this was the closest I have come to a Pink Floyd/Waters concert so it was great just to let loose. Roger seemed to like it also! I think the crowd was most into the show during Perfect Sense Part 2, Roger running from side to side on the stage waving his arms in the air trying to get the audience to sing along which they did.

A very powerful part in the show. Then The Bravery Of Being Out Of Range and Amused To Death which are two of my favorites from Roger. After that Roger introduced the Band and then they went right into Brain Damage/Eclipse. I thought they also did an incredible job at that. Then Roger states how he felt tonight and how it related to his magical days with the Floyd, the he says “Its Party Time” and it was! Comfortably Numb! Once again Doyle Bramhall and Snowy did a great job filling in for Dave, and i think playing on top of the platform together was very cool.

So the show was over! they all said goodbye and left the stage, the lights went on and the people started to exit, including my friends but i told them to just wait. (i had known about them coming back out for Each Small Candle but i wish i hadn’t known). So They come back out, everybody’s happy! Roger says that they are going to do a new song and didn’t really go into the meaning because you could tell he was pretty worn out from the end of the tour. They play Each Small Candle, very good performance, i really like that song now and cant wait for it to be released!

so we left for the 3 hour drive back home. One thing i thought they should have done different was to play ESC before Comfortably Numb, just because everyone knows CN and it would be a better end to leave then come back out and do something popular and awesome!

My pictures didn’t come out which made me pretty mad but i did laminate my ticket stubs!

THANK YOU ROGER! FOR THE BEST NIGHT OF MY LIFE! 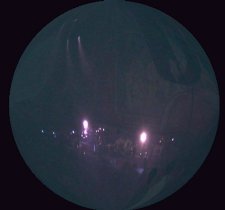 All pics thanks to Greg DowlesNightfern@aol.com