Pictures thanks to Brian McGilvrey cmm@aa.net

I was introduced to Floyd six years ago when I was 15 years old. Ever since I have been a Floyd fanatic. I never thought I would have the opportunity to see Floyd or Roger in concert, luckily I was wrong.

I bought tickets to Roger’s show a little to late, and consequently I had really horrible seats, but more about that later. My younger brother accompanied me to the show. He is only a casual Floyd fan. He had a copy of Dark Side and I bought him a copy of The Wall the day of the show.

We arrived at the Idaho center about 3 hours before the concert began. I used this as an opportunity to try and get better seats. Forget the scalpers, I went straight to the box office. New seats were available parallel to front row, three rows up from the floor! So for a meager upgrade fee (one dollar per ticket) we were going to be very close to the stage.

Before the show began my brother and I met a lot of other fans who were from Utah and made the same trek. We listened to Animals, Meddle, and Radio Kaos before the concert. As the show grew nearer we walked up the ramp through the gate where someone was playing part 2 of the Wall very loud. While my ticket was being taken “The Show Must Go On” echoed in the background.

Right outside the arena Roast pig dinners were being sold, I thought that was a nice touch.

A general rule is that there are going to be a few assholes at a concert, sadly this was no exception. Only we had the misfortune of being seated almost right next to one. This woman was a piece of work. She would yell obscenities at the stage and spill beer on the people in front of her, and generally make a fool out of herself. But then the music took over.

The house lights dimmed and I heard Roger count off to three in German, then he launched right into “In the Flesh”. Of course at the point I am almost hysterical. I never imagined I would see Roger in concert, or be this close to the stage. He looked straight at me, and I was nearly in tears.

The setlist is the same as every other show, no variations. But it was an excellent selection of songs. Although I would have like to have heard something from Radio Kaos.

Musically the show was without flaw, except one of the backup singers forgot some lyrics to Mother. And I for one, was quite impressed with Jon Carin’s ability to play the lap-steel guitar.

I really can’t pick out any highlights, but the Dark Side of the moon set in the second half was really something else. Roger was in great spirits and seemed to enjoy performing.

As far as souveniers go, I bought a program, two shirts, and one of the signed lithographs. I damn near missed “Set the Controls” from all the girls stopping me to admire the lithograph.

I’d have to say this is the best show I’ve ever seen. Actually seeing the greatest lyricist since John Lennon (or of all time) up on stage is something I will never forget. I can only hope that Roger will tour again when his new album is completed. And who knows, maybe he will even play some material from Radio Kaos (I always thought Radio Waves would be a great opener).

I would like to thank Col for giving me a forum to rant and rave about a great show. Thanks Roger 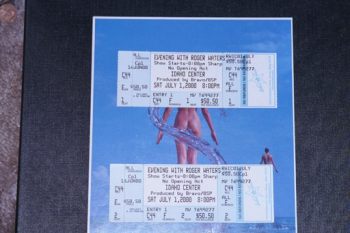