Tonight, East London saw the opening of album artwork designer Storm Thorgerson’s second exhibition. Storm has been Pink Floyd’s go-to man for sleeve design since he and fellow artist Aubrey Powell provided the cover for A Saucerful of Secrets way back in 1968.

The event was a fun-filled, interactive affair, including a geographical quiz, a weirdest name competition, a raffle, and an auction presided over by Storm himself. Even the floor and furniture were decorated in CD covers adorned with Storm’s art.

There was plenty on display for a Floyd fan to gawk at, from concept drawings to fine-art prints of some of the band’s best known album covers, to artwork used in books and in promotional material. There was even a tiny Division Bell postage stamp discretely stuck to a wall. The large-scale prints look spectacular, and are available for the discerning Pink Floyd aficionado to purchase from the gallery’s website.

As well as his extensive work for Pink Floyd, Storm and his studio have also collaborated with acts such as Peter Gabriel, The Steve Winwood Band, Led Zeppelin, Black Sabbath, and in more recent years, young upstarts like Muse, Biffy Clyro and The Mars Volta. 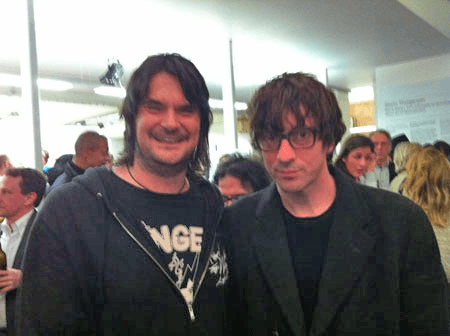 We bumped into Blur guitarist and Syd Barrett uber-fan Graham Coxon, who we’d last spoken to at the Syd art exhibition held at the same gallery. Coincidentally, he was chatting to Syd’s one-time girlfriend Jenny Spires, who Paul took a photograph of at the John “Hoppy” Hopkins exhibition. Graham gave us the lowdown on his forthcoming album – apparently it’s going to be “noisy”! 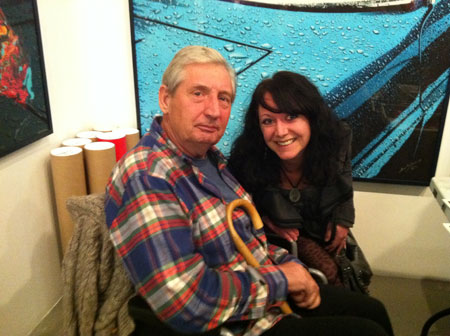 We grabbed a quick chat with Storm, and thanked him for the online questions and answers session he did for A Fleeting Glimpse in 2009. I also took the opportunity to apologise for not sending him a bikini photo of myself by the lake in Nazing, as he’d jokingly requested! We asked how he enjoyed his recent stay with another Pink Floyd stalwart, James Guthrie, and he assured us he had a lovely time.

Storm is a charming guy and it was a real pleasure to meet him. If you’re in London town in the next few weeks, please do check out this exhibition as it’s a fantastic treat to see Storm’s iconic work up close and so superbly presented!

AFG wishes to express our appreciation to Natalie Lyon & Paul Thake for attending on our behalf & for the report, video & pictures.