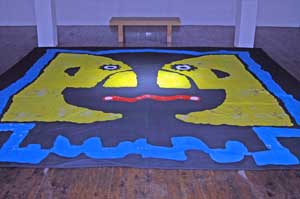 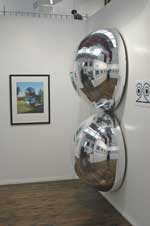 The latest, and largest of the traveling art exhibitions of Storm Thorgerson’s work opened in Birmingham recently at St. Pauls Gallery and I had the chance to go along to the official launch night to catch up again with Storm

The gallery is in an old warehouse building with a high glass roof “which is the best location so far” according to Storm. Amongst the old favourites and iconic pictures are a number of new pictures that have rarely before been seen – the Momentary Lapse beds shot in the French countryside that was used as a tour poster, together with the Bridge shot that wasn’t used for the Interstellar Exhibition in Paris. The mirrored balls that were used are also on display here again and are still for sale. All pictures are available as fine art prints with the two just mentioned being part of a new 20/20 series – 20 copies of 20 pictures in a magnificent case for UKP400 each. This series also includes my favourite cover, Broken China. I’m sure this set will quickly be bought up, and become a collector’s item as the Back Catalogue print has become, which is now sold out although the artist proof is on view here. 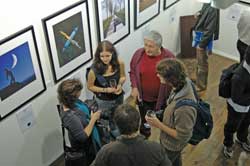 This exhibition includes more non Floyd work that ever, including a copy of the Black Sabbath cover, Technical Ecstasy which takes many cues from the WYWH robot hands and Knebworth 75 tour programme. The original artwork was believed long lost but apparently had been on display at a Hull museum for the past 20 years and this is its first outing as part of the show. To mark this event Tony Iommi was present and shared a few jokes with Storm especially in front of the BBC TV cameras that were also covering the event.

Helping Storm set up is Dan who makes up the trio with Peter Curzon who are still working away on new projects. One of the latest is for a band called Healing Sixes and features a man at 45degrees leaning into a lake balancing a ball on his back shot at the same location as the WYWH diver. Another features two versions of Storms son looking at clouds that have morphed into butterflies.

As part of my interview with Storm we covered quite a diverse range of topics that started with the exhibition and ended with memories of Syd Barret with many laughs in between. Storm was as funny and direct as he always is, and even through the interview he carried on directing what needed to be done to set up the show. 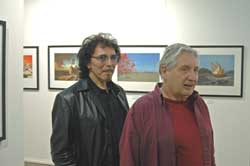 “We are beginning to learn how to do them, because they are very site specific” and this gives them a “different kind of feeling. There is a different challenge each time” Storm tries to go to as many as he can but the next show in Cleveland at the end of October will be one that “Dan will be going to”. “People have seen my work and feel related to it, nostalgically or with venom can see it for themselves so the next exhibition I’m going is in Milan so if the shows don’t travel, people can’t see my work. Each show is different – San Franciso will be bigger still and there will be two more prints by then”

“I try to go to each due to rabid control freakdom and desire to run the universe” but Storm admits that it “could be better done by a objective person but there aren’t that many good art curators, or any who will work with me. Offer me a good curator which is the same as a good sound man and if I could trust/find someone not in my studio” then he would consider it, but I get the definitive feeling that he’s not that happy with anyone showing his work where he doesn’t directly control the look and feel of the show

There is “no desire for a permanent gallery” but there could “possibility of a Floyd gallery in Cambridge that my work could be part of”.

The fine art prints “are the best I can ever do them. It’s the best way to make copies so you can see them in their full glory. We’d like them bigger. Division Bell is a fantastic billboard as was Atom Heart Mother. The (Momentary Lapse) beds print here is the biggest I’ve ever seen it. It’s 100 times bigger than a CD” and is the print that greats you on entering the gallery 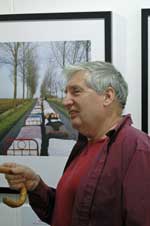 Asked if there were any album covers he wished he’d done he said “I did a book subtlety entitled 100 best album covers with Po and we were terribly modest and only put in about 5 of our own, tempted as we were to put more but modesty forbade it – its my and Po’s 100 favourite covers” but “there are of course a much greater number of album covers I’m glad I didn’t do”. So get the book and you’ll get some idea about what artwork Storm admires and which 5 of his covers that he rates the highest although from a previous interview I did with him, he particularly likes the cow.

“There are loads of bands I’d like to work for, most particularly Bob Dylan because I like his music. I’m happy to work for anyone and don’t have judgmental views about music and like all kinds of music. I translate the music”

We then turned to the recent shows by Roger which Storm thought was “very good” but “I wasn’t very happy with the films”. “Roger knows the tempo so it was played at precisely the right tempo and Roger stuck to the vocals he does. The show was faithful. Dark Side doesn’t need any improvement” although he does like Dub Side of the Moon as that’s an interpretation done by someone else. 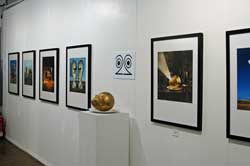 Storm was also at David’s Albert Hall shows where he thought “David’s rendition of Echoes was a particularly high point. He’s extraordinary but it’s very difficult as a Floyd fan to take on board his solo work without wanting to go back to the Floyd. That I would say is a mistake of ours but it’s quite human. A Floyd fan yearns for Floyd and it’s our mistake not to absorb as purely or as directly his new stuff as we would Floyd stuff. It’s a quality of being a fan. It’s hard as a fan of the band to approach the solo material with an open heart as you’ve already given your heart to the band. It’s harder to gauge his new material whilst wanting him to play Shine On or Echoes and I think we do him a disservice” 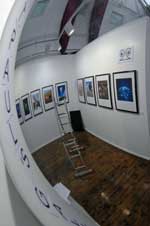 “Next year is a big year for the band. Forty years “man and boy”. Now there’s an idea” so you heard it here first if that’s the title of a new boxset. “I hope they do something mostly for the fans” but no decisions have been made yet

Of course DSOTM always comes up. “I just redid the prism for Roger. I turned it into a painting. An impressionistic painting” based on Monet and Van Gogh’s idea of painting the same thing in different lights.

“The first version of DSOTM was a drawing, the second one was a photo, the third was a stained glass which I thought worked fantastically and I actually like it more than the others” and now the impressionistic painting but Storm is still open to more iterations. “If the band wanted to redo it then I would. As far as I’m concerned I’d rather I redid than someone else. I don’t want some other schmuck doing my piece”

As a final item I asked about his most enduring memory of Syd. “It was at a party when he was playing Effervescing Elephant and thinking it was really nice but not thinking that he’s going to go anywhere” before remembering a much funnier story about a hamburger which maybe isn’t for a family website 😉 (Note: We have a short sound clip of this segment. You probably shouldn’t be eating anything if you are thinking of listening to it!)

As always the exhibition is a must see, as you really get to see the covers in a scale that’s more human and even take one (or two) home with you. I fully recommend it.

JCE and A Fleeting Glimpse wish to thank Storm for his time to answer our questions, and to Robin & Nina for arranging access to the show.