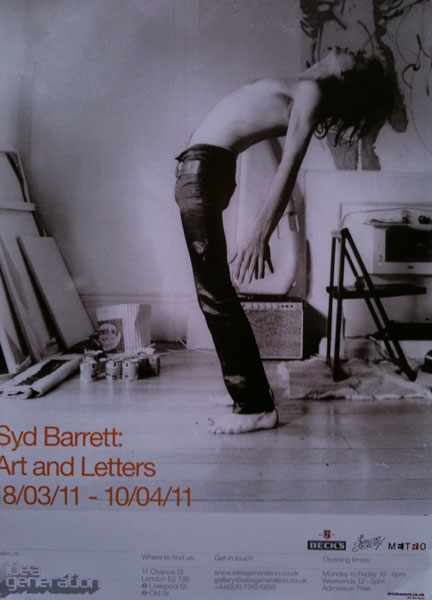 “Syd Barrett: Art and Letters” is the first exhibition of its kind, bringing together Syd’s paintings, drawings, letters, and photographs. Also featured are photographs of Syd, together with Pink Floyd, and a selection of prints of Storm Thorgerson’s artwork. AFG were there on the opening night to bring you coverage of this unique celebration of Syd’s work! 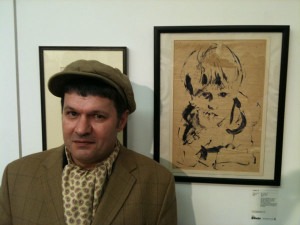 After a swift half of ale, we made our way to Idea Generation Gallery in East London. The place was rammed with bohemian types, among them a number of Syd’s former associates, as well as many dedicated admirers.

The exhibition contains several of Syd’s paintings that fans will be familiar with (the turtle painting, the lions, his girlfriend’s nephew), but also many works that have never before been seen. As well as the art, there is also a fascinating collage of photographs that Syd took of his paintings over the years, before destroying the artwork itself. Apparently he sometimes painted up to ten canvasses a day! For those fans who have wondered how he spent his days after his retirement from the music industry, it is pleasing to see that his lust for creativity never waned, and he remained productive throughout the years.

Two of his paintings most familiar to fans are of a small boy, the nephew of his girlfriend Viv Brans. As we were admiring them, a gentleman told us “That’s me!” Amazingly, this was Philip James, who as a six-year-old in 1965 had been painted twice by Syd Barrett! He explained that Syd worked very quickly, and it only took him ten minutes to complete the work, also describing how Syd’s brush movements were akin to his guitar playing style. Philip has held on to the paintings ever since, and when he grew up became a fan of Syd Barrett and the early days of the Floyd. He was gracious enough to let us photograph him next to his portrait!

Also in the exhibition is a fascinating display of letters that Syd wrote to his girlfriends Libby and Jenny, throughout the late ‘60s and early ‘70s. This funny, often beautifully illustrated, charming and witty correspondence reveals a warm, lovingly devoted side of Syd Barrett. He often speaks of his band, mentioning buying a new amp, his friend Emo advising him to give up because the group are terrible, recording early demos (“Let’s All Roll Another One”, “King Bee” and “Walk With Me Sydney” are referenced), and an impending visit from his old pal “Dave” Gilmour.

There is a large display of photographs, some candid snaps of Syd as a young man, others studio and live photographs of the early incarnation of Pink Floyd. The photographs of the band are astonishing, many never before seen. As we surveyed the photographs, we ended up chatting to a friendly elderly gentleman named Jasper Rose, who once upon a time was Syd’s schoolteacher. He remarked how extraordinarily beautiful Syd always was, as well as talented. 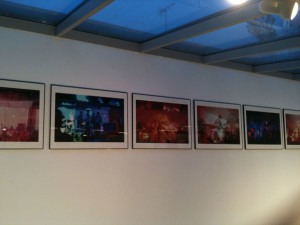 In another area of the gallery is a selection of Storm Thorgerson prints, some of which are his photographs of Syd, and others his artwork for Pink Floyd over the years. These are for sale through the gallery. A stunningly detailed, mind-boggingly large Division Bell print can be yours for £1000! 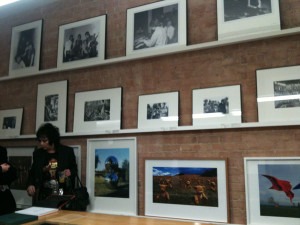 Iggy The Eskimo Alive & Kicking Some might ask ‘Who is Iggy the Eskimo?’ but if you have ever seen the back cover of Syd Barrett’s debut album The Madcap Laughs you would have probably noticed her naked body! Iggy was thought to have disappeared in the mists of time (although sometimes reported as a member of a cult, or even married to a millionaire) but amazingly, after all these years, she was tracked down in 2010. Iggy (who enjoys anonymity) attended the opening of the exhibition and we understand had a great time. That’s Iggy on the left in the above picture. We wish to express a special thank you to Iggy for giving us permission to use this photo of her. 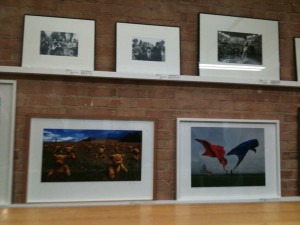 Here we bumped into Graham Coxon, guitarist with Blur, solo artist and Syd obsessive. We chatted to Graham about his admiration for Syd, who he cited as being the reason he plays a Telecaster. We explained to him that we there as representatives of AFG, and told him about the online talk with fans that Storm held on the site last year. Graham told us how Storm nearly made a documentary about Blur in the early ‘90s, but unfortunately due to friction within the band and their commitment to attempting to crack the US, it never got off the ground. Shamefully, we were just too blown away by Graham’s awesomeness to ask to take his photo!

Then we spied Syd’s Barrett’s old flatmate, the fabulous artist Duggie Fields. Duggie was resplendent in full Teddy-Boy gear, and we recognised him instantly. He was very in demand, and we only had time to have a quick word and take a photo, but he seemed like a thoroughly nice chap. 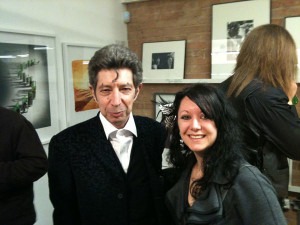 We later spotted Pink Floyd manager Paul Loasby, who we accosted, explained that we were Col Turner’s (AFG) local correspondents, and expressed to him our admiration for the event. He told us that it had taken a lot of preparation, and that this would be the only time something like this would ever happen. Keeping this in mind, we would urge fans to try to get a chance to see this testament to Syd’s remarkable talent, which offers a captivating glimpse of Pink Floyd at their inception. 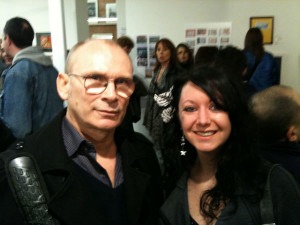 The exhibition is free to the general public and runs 18th March-10th April.

It is accompanied by the launch of the book Barrett: The Definitive Visual Companion by Essential Works.  For more details see: www.barrettbook.com

AFG wishes to express our appreciation to Natalie Lyon & Paul Thake for attending on our behalf and for the report & pictures.