A Fleeting Glimpse was on the spot once again. This time our Los Angeles correspondent Aaron Ezolt covered the opening of Storms Exhibition, and filed this great report & pictures. Thanks Aaron. 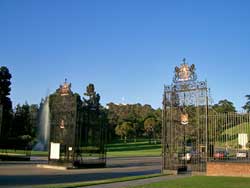 At seventy-nine degrees and sunny, the weather couldn’t have been more beautiful driving to the exhibition. Doors were opening at 7 p.m. and I wanted to arrive not a minute later. On the way, my girlfriend remarked when looking at the invitation, “did you know this was at a mortuary?” Borrowing a quote from David Gilmour I answered, “Well, these guys are getting pretty advanced in their age.” Suffice to say, she didn’t get my corny joke. As we pulled up to the entrance of Fair Oaks I realized why they chose this site for the exhibition; it’s beautiful. And not that often you see a sprawling, lush landscape in the middle of Los Angeles, so right away I could tell this was going to be something special.

Driving in through the giant (and brilliantly crested) iron gates past the mortuary and flower shop looked like the grounds of an old Victorian mansion. The museum, where the exhibition was being held, was set at the apex of the property which featured amazing panoramic views, stretching from the San Fernando Valley to downtown Los Angeles. 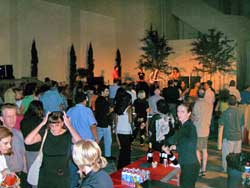 At the entrance of the museum we were asked if we were “guests or media?” When informing the attendants of the latter, we were immediately shown inside and introduced to Phyllis Grabot, whom represented the P.R. firm attached to the exhibition. She was excited to hear I was representing A Fleeting Glimpse/pinkfloydz.com and presented us with full color programs for the event. She also seemed regretful to inform me Storm was not going to be in attendance, but since I was told in advance, this didn’t affect my evening in the slightest.

The event was actually called “Revolutions: Artists Who Rocked the World of Music Industry Graphics”. The galleries consisted of two main viewing rooms. The first of the two rooms consisted of many remarkable photographs and graphic images by some of the most respected names in the field. There were pieces involving everyone from George Harrison, to KISS, to Alicia Keys, Jimmy Hendrix and Frank Sinatra. Being that I came to see Storm’s artwork, it was a pleasant surprise seeing this room first; to sort of whet my palate for what was in my regard; the night’s main attraction. 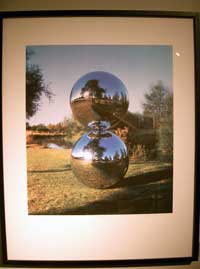 The second room was dedicated solely to the Taken By Storm exhibition. I was pretty familiar with almost all of the pieces in the room, but seeing them up close was as if I were viewing them for the first time. I couldn’t believe some of the details I overlooked, or maybe just didn’t see in some of the more popular Pink Floyd album art. For instance, I never realized the four masks of the Live Wall album were pictured in front of a black bricked wall. I don’t remember seeing the hang glider in the Momentary Lapse cover, and I won’t even begin to explain everything that’s going on in the Pulse cover. My favorite of course was the stained glass used for the Dark Side SACD (what I wouldn’t give to have that in my home). Every image was crystal clear and by no stretch; truly works of art. I was in awe, as it gave me a newfound respect for the thought process considered for each concept.

The evening eventually wound down with the mellow sounds of a pretty competent live band called: Mighty Sound (which featured singer/songwriter Michelle Shocked). We joined the guests to congregate on a back terrace to watch the sun set over the valley from our hilltop perch. It was an evening I won’t soon forget. Many thanks go to Col T for arranging the invites and Phyllis Grabot for being a most gracious host.