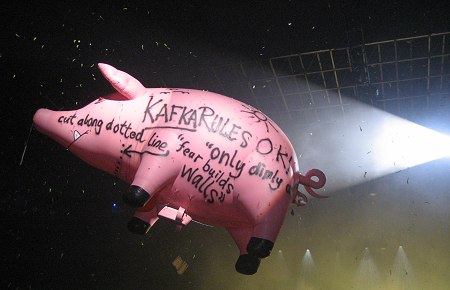 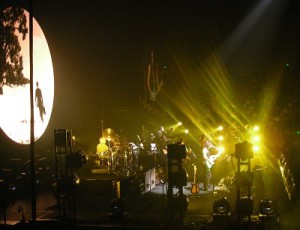 Thanks to Andrew Moyle

I was at Roger’s Friday night gig in Melbourne. I had never seen Roger or Floyd play live and was bowled over by how passionate about the music Roger is. Though the venue leaves a lot to be desired as far as atmosphere goes it was clear that Roger put his heart and soul into the show and I enjoyed every minute of it.

The songs were played faithful to the original recordings, his band were great and the stage effects were spot on. The set which lasted well over two hours seemed to go by in a matter of minutes.

What a fantastic gig. If any of you out there reading this are thinking about going to see the gig stop thinking and buy yourself a ticket. You will not be disappointed!

CONCERT REVIEW – by BD contributer, Matt (a different one!) who also supplied the pig picture 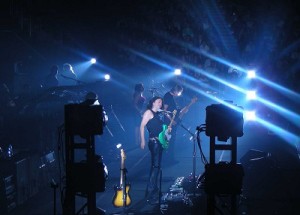 Thanks to Andrew Moyle

I had the great fortune to go to both Melbourne shows, and all I can say is Roger rocked! The local papers gave him rave reviews for the Thursday night show, but Friday’s was even better. The only down side was the setlist was identical both nights – I’d hoped Roger would throw in one or two different numbers on the second night.

The first half of the show started with ‘In the flesh’, and 70 minutes later closed with a personal favourite, ‘Sheep’. It was great to hear songs from ‘The Final Cut’ album – its a shame ‘Perfect Sense’ was the only solo album song performed, though I really enjoyed ‘Leaving Beirut’. At least Snowy got the guitar intro for Shine On right tonight, after bungling it the first 2 times on the Thursday night show.

The second half – DSOTM – what more can you say? And, a nice medley from The Wall to round off the show as an encore.

Though he barely talked to the crowd during the show, at the end he thanked the audience, and said thanks for letting us (the British team) win the cricket – which brought out boo’s from most of the Aussie audience. Roger seemed to enjoy it though, and I personally think he was enjoying the show more the second night.