“ Tonight’s concert was nothing less than spectacular. It totally blew me away!
The setlist is brilliant, the band is perfect, the sound is sublime and Nick still plays his signature drum fills!
I couldn’t have hoped for a better show.
And to hear Atom Heart Mother played live was nothing short of breathtaking! “ 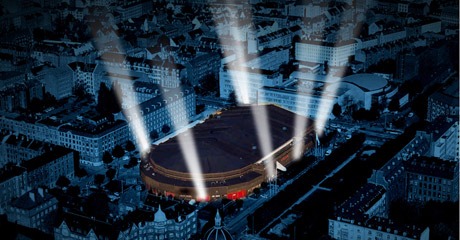 On 11 August 1925, the construction committee signed the contract to build the venue. On 25 September 1925, Prime Minister Thorvald Stauning laid the foundation stone for the construction. Forum opened for the first time on 20 February 1926 for this year’s major automotive exhibition. Forum Copenhagen was designed by Oscar Gundlach-Pedersen, and the lighting was from Poul Henningsen’s brand new PH-lamp.

In 1929 it held an architecture exhibition, which was one of the first presentations of functionalism in Denmark, namely the Housing and Building Exhibition in Forum. It was at this exhibition that Arne Jacobsen and Flemming Lassen exhibited their subscription to the cylindrical “House of the Future”.

During World War II, the Danish resistance movement group Holger Danske destroyed the original hall in an act of sabotage in August 1943.The hall was first rebuilt and extended in 1947. An annual six-day bicycle race was originally held here and was later moved to Ballerup Super Arena. In 1997, the Forum concluded an extensive renovation of the roof costing 70 million DKK, resulting in better acoustic sound and more concerts.