↓
Home→news→Roger Waters to appear at ‘Eric Clapton & Friends: A Tribute to Ginger Baker’ concert on February 17

First announced in November of last year, Eric Clapton’s tribute concert for Ginger Baker will be taking place this weekend in London, and one special guest just been announced: Roger Waters!

It will be Roger’s first time playing on stage with Eric Clapton since 2006, and 36 years since they toured together for ‘The Pros and Cons of Hitch Hiking‘ in 1984.

Tickets for the concert sold out within minutes of the announcement last year, so if any AFG readers are lucky enough to be attending then we hope you enjoy the show. 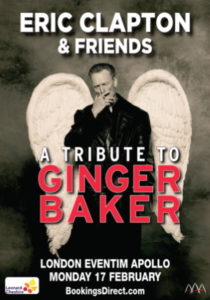 Eric Clapton & Friends: A Tribute to Ginger Baker will take place Monday, February 17, 2020 at the Eventim Apollo Hammersmith in London.

The set list for the concert will look to honour Baker’s lifetime in music and will, of course, include Clapton and Baker’s work together in Cream and Blind Faith.