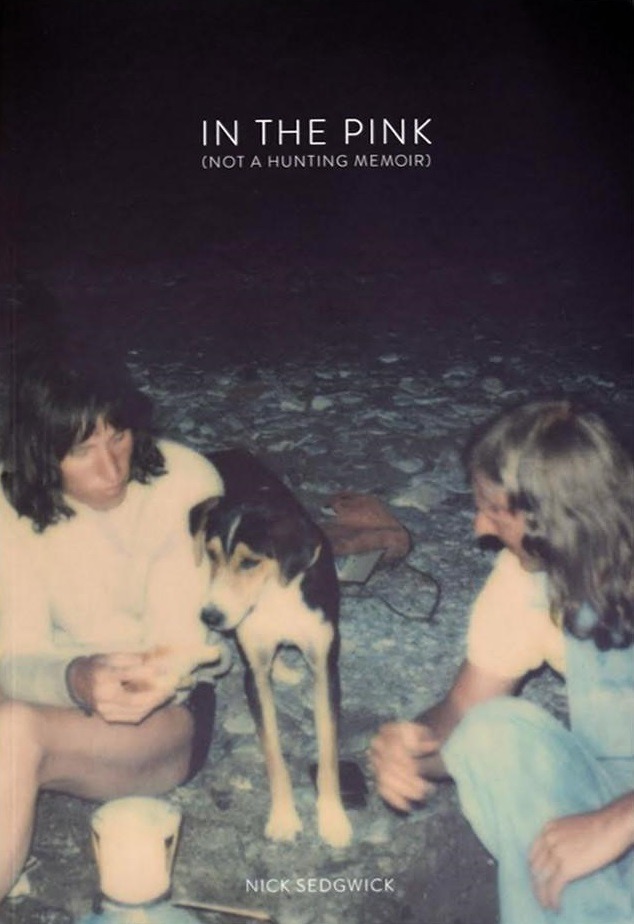 Here it is, with little fanfare, no ISBN number and in limited numbers – the near-mythical “official” Pink Floyd book that was never meant to see the light of day.  It’s only available (for the moment) from Roger Waters’ US online store, the Victoria and Albert Museum in London or the merchandise stands at Roger’s gigs.  Why was the late Nick Sedgwick’s book mothballed for decades after he was granted unprecedented access to the band during the chaotic post-Dark Side of the Moon UK tour of 1974?  Legend has it that factions within the band and the management curtailed its release after balking at the portrayal of certain members.  So what juicy titbits do the pages hold that warrant its release being delayed for over forty years?  Tales of debauchery and hedonism?  Grievous bias towards one camp or another?  An abundance of golf?  Actually, it does feature rather more golf than I’d prefer, though I’m sure Roger Waters would beg to differ.

In The Pink is, at face value, rather appealing in aesthetic terms.  It has an understated matte cover, lovely thick paper, oodles of 70s holiday snaps of Roger cavorting in Greece, and is heavily annotated by Roger himself.  Roger, it emerges, has handwriting so appalling that it’s no wonder his teachers despaired of him.  Nevertheless, if you can penetrate his near-illegible scrawl you will find his nostalgic insights and wry commentary compelling.  He’s also quite good at drawing dogs.

Sedgwick is an endearing narrator – self-effacing, contemplative, and with an eye for details of both the technological and the human.  Some might complain that his writing style errs on the side of wordy, but hell, you’ve all heard Roger’s solo albums.  This is positively Hemingway-esque in comparison.

This version of the band’s history is very much from Sedgwick’s perspective, and so begins in Cambridge, where he was familiar with Roger, Syd and Storm.  This gives some interesting socio-economic context to the band’s history.  We get some insight into the burgeoning drug culture in late ‘50s provincial British towns, and how proximity to US air bases influenced teen culture.  We’re also treated to some delightful photos of teenaged Syd and Roger, fresh-faced and dapper.  Sedgwick recounts his impressions of Syd as charismatic, charming, funny, dashingly handsome and all that, before concluding that he didn’t like him very much.  It’s refreshing to get this down-to-earth view of Syd that doesn’t seek to deify him as some mystical genius or romanticise mental illness.

Nick Sedgwick’s life takes a more mundane path, until he ends up booking Floyd for student union gigs.  Later, he reconnects with Roger on the golf course.  This is where the second phase of the book begins.  It’s here that In The Pink feels somewhat disjointed, with a huge chunk dissecting the breakdown of Roger’s first marriage sandwiched awkwardly between Pink Floyd’s early days and post-Dark Side superstardom.  Sedgwick relates the tale of how he had a stupendously uncomfortable Greek holiday with Roger and wife numero uno Judy.  Apparently he’d toyed with the idea of changing names and turning it into a novel.  It would have made a very depressing novel.  For Pink Floyd fans, the level of interest would depend on how much you want to know about Roger’s personal life.  We get a lot of insight into Roger as a husband, as well as his reaction to the success of Dark Side.  To Roger’s credit, in the face of unimaginable wealth and fame, when he could easily have become an entitled tool, he remains grounded and good-humoured.  He’s not averse to engaging with the common folk, displays balls of steel when robbed at gunpoint, and when he knocks out a few chords on the guitar he deadpans, “That’s another ten thousand quid.”

Problems arise when it emerges that – quelle surprise! – obscene wealth and communist ideals don’t mix well.  While Roger reconciles with his new status as one of the bourgeois, Judy is incensed at the disparity between their bank balances and those of the Greek villagers they holiday amongst.  On one hand her mortification at Roger buying a small boat is a bit irritating, but on the other you’ve got to admire her resolute determination to stick by her principles.  Things get ugly pretty quickly, and Roger is not always painted in the best of lights.  Poor Sedgwick has a mare of a time, playing third wheel and offering a shoulder to cry on for both parties.

You’d think that after such a tension-filled holiday he would have a much more relaxing time on tour with Pink Floyd.  Ah…

Which brings us to the final, and most enjoyable, third of the book.  Pink Floyd’s Autumn ’74 UK tour should have been a triumphant return to their home stomping ground, but from Sedgwick’s account it sounds like a chaotic shambles, rife with bad equipment, inexperienced crew members, ramshackle concert venues and long-distance drives across the bleak and rainy Britain of the early 70s.

It’s surprising that a technologically savvy bunch of chaps like Pink Floyd would have cocked up so monumentally when they hired a snazzy new mixing desk and a guy who didn’t know how to operate it.   What’s more surprising is the lack of suitable concert venues around the country.  Pink Floyd play Cardiff (one of our largest cities) and it’s as though they’re playing in a one-horse town that’s never before heard the astounding sounds of the electric guitar.  The mayor of Cardiff gets onstage to make a speech and declares with excellent prescience that one day Cardiff’s football stadium would host concerts.  But right then, to a band growing disgruntled with shoddy electrics and brazen indifference to fire safety, it’s nothing more than a bonkers pipe dream.

Sedgwick’s original mission objective was to cover this tour, so his recollections are impeccably detailed, and will doubtless be riveting for Floydheads.  However, if you’re hoping for sex and drugs and other fun stuff, you’ll be disappointed.  The roadies get into some scrapes, the odd joint is smoked, and that’s about it.

There’s the sense that the band was having difficulties with how giddying success radically altered the types of audiences they were playing to.  In place of the reverence of their hardcore pre-Dark Side crowds, they found themselves a group of 30-something men playing to crowds of provincial teens, and struggling to make a connection.  But at the same time there’s an indication of how their newfound status as superstars could potentially enable them to strike forth into new innovative territory.  What seems a marvel in hindsight is their decision to play material from Wish You Were Here and Animals, ages before either album would be recorded.  It’s hard to imagine Coldplay being so bold.  It’s also a testament to the open-mindedness of the kids who witnessed the ’74 tour that they were so receptive to the unfamiliar material.

The real meat of the piece is the power struggles between the band, manager Steve O’Rourke, apocalyptic-tempered lighting designer Arthur Max, and assorted other senior crew members.   Steve O’Rourke seems terrified that his sacking is imminent, when in fact he would remain their manager until his death in 2003.  Max is a volatile genius, in turn working miracles and throwing hissy fits of such epic proportion that he seems universally despised by the tour personnel.  The personalities of the band members are… as you’d expect them to be.  There are no big surprises here.  Roger can be scathing and confrontational, but also smart and ambitious.  He’s certainly portrayed as the most ideas-driven and visionary band member.  Nick Mason is the lovable, jocular drummer that you know and love.  David Gilmour is laid back.  Rick Wright is mild-mannered and lovely but… not really in it very much, until near the end, where he appears uncharacteristically furious about Sedgwick’s manuscript.  And there’s a distinct lack of communication between band, management and crew, which comes as absolutely no surprise since this is a band that wrote a whole concept album about lack of communication.

I suppose the portrayal of the band members and what they contributed in those days is probably the crux of the issue of why the book was withdrawn.  Nick Sedgwick was Roger’s buddy after all, so it was inevitable that there would be a degree of bias.  It’s not even as though Roger is portrayed in a better light than the rest of the band.  Often he’s shown being an obnoxious dickhead.  But he’s a dickhead who gets shit done, who comes up with grand schemes, who has integrity and who drives the band towards a collective purpose.  Aside from the Roger-centric approach to the narrative, there really isn’t anything obviously contentious here.

What we do have here is an in-depth look at a pivotal moment in Pink Floyd’s career, offering a (fleeting) glimpse of a band at a creative crossroads.  And we are treated to two revelations.  One, that during the course of the tour the band signed a contract for an eye-watering seven albums.  It must have been unimaginable to them at the time that the seventh and final album of their post-Dark Side output would be released forty years, almost to the day, after the start of that tour.

The second revelation is that Arthur Max shot a film of a November gig in a freezing cold dilapidated ballroom in Stoke.  A ballroom so dejected looking that it prompts Roger to contemplate that in the future they should play a series of gigs in one venue in order to stage more elaborate shows.

Will that footage ever see the light of day?  If In The Pink has, then anything is possible.