Ever since eagle eyed Pink Floyd fans noticed cameras at some of the London gigs on the 2019 Saucerful of Secrets tour, we’ve been waiting for news with bated breath. Today we finally get the details of those recordings, in the form of the ‘Nick Mason’s Saucerful of Secrets: Live at the Roundhouse’. The concert comes in a few varieties, including CD+DVD, Blu-ray and Double Vinyl and will release on April 17th, 2020/ 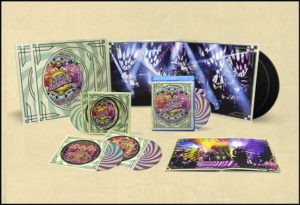 “Nick Mason, the only band member to have played on all of Pink Floyd’s studio albums, returns to the group’s earliest records, joined in the line-up by Gary Kemp, Guy Pratt, Lee Harris and Dom Beken. Nick Mason’s Saucerful of Secrets took the drummer back to clubs for the first time in 1967, then to theatres, across the UK, North America and Europe, playing only music his old band had recorded before The Dark Side of the Moon. Captured from the band’s celebrated shows at London’s Roundhouse, where Pink Floyd played some of their most revered early shows in the 1960s, the film features a uniquely thrilling setlist including songs hailing from Syd Barrett’s time with the band. Only four songs from this eclectic roster have ever previously appeared on official live releases by Pink Floyd or its members. Everything else is being experienced for the first time since their original live performances.”

Nick Mason's Saucerful Of Secrets - Fearless (Live At The Roundhouse) 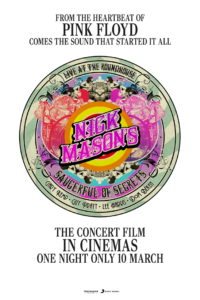 In line with recent releases, the concert film is also getting a limited cinema screening in certain locations on March 10th.

Details are available over at https://www.nickmasonfilm.com/.

Tickets aren’t available at all locations yet, so remember to check with your local cinema.