To celebrate the 35th anniversary of its original release, The Prince Charles Cinema in central London has had six showings of the 70mm print of Alan Parker’s Pink Floyd The Wall . This is the first time since its original release date that it has been presented in this format on the big screen.

“Being a second generation Pink Floyd fan, and with the release of the movie based on their 1979 album The Wall 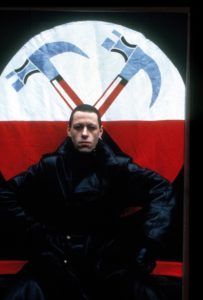 pre-dating my arrival in this world by approximately 9 years, I of course missed the opportunity to experience the film on the big screen. Somewhat of an obscurity, even amongst some dedicated Floyd fans, The Wall movie is undoubtedly a cult movie which is somewhat alienating for a mass audience, not fully versed in Pink Floyd’s tone and style. One of the best independent cinemas in the country however, the excellent Prince Charles Cinema in London’s Leicester Square recently screened The Wall in an extended month-long run, and even better, on authentic 70mm film, with all its original fading and crackles in tact! It was here that I was finally able to experience the film on the big screen for the first time, and taste something of what it was like to watch it with the full cinematic experience.

I’ve watched The Wall many times before; in fact at the height of my Floyd obsession circa 2007-2010, I would probably watch it once a month! It is an interesting experience for sure, telling the story of the album in visual form using a mixture of live action and Gerald Scarfe’s incomparable animation, and with very limited dialogue. The album itself tells a story, but without some extensive research or listening, it might be tricky for the untrained ear to pick up on the story at it’s heart. The film itself doesn’t do too much to make it any less impenetrable, but it does add an extra layer to this already celebrated album, that is absolutely worth a watch, and especially on the big screen.

Watching this film at a time when literal walls are being talked about by a certain someone across the pond, it feels strangely timely to watch this, and in particular the scenes of Pink (Bob Geldof) as a quasi-Fascist dictator in his own mind are even more compelling. As was always the case with this film, the animation is the highlight, and the sequences which accompany Goodbye Blue Sky, Empty Spaces, and my personal favourite, The Trial, are disturbing, powerful, and funny in almost equal measure.

Whilst The Wall is undoubtedly an odd film, and still somewhat alienating for those who perhaps aren’t familiar with the album’s concept and central themes of abandonment and isolation, watching it on the big screen perfectly marries the unusual and unforgettable imagery with the sheer power of the music, making it a wholly more satisfying experience. The familiarity with songs such as Another Brick in the Wall pt. 2 and Comfortably Numb are given new weight and meaning when listened to with the accompanying visuals, and whilst disturbing in places, the operatic visceral quality of songs such as In the Flesh and Run Like Hell have even more raw power when viewed as opposed to just listening to them.

It is perhaps ironic for a film and album which focuses so heavily on isolation as it’s central theme, that the film makes the album somehow less of an isolating experience, and whilst newcomers might still have some questions, it is incredible to see Waters’ visionary album visually coming to life. You might be a second generation Floyd fan like me, or perhaps seeing this film at the cinema in 1982 feels like somewhat of a distant memory, but if you’re able to experience The Wall on the big screen, then it is an experience not to be missed!”

We would like to take a moment to send special thanks to Sarah Buddery for taking the time to write and send in this review.