↓
Home→News→Reinventing Pink Floyd: From Syd Barrett To The Dark Side Of The Moon Book Review By AFG Correspondent Julie Skaggs 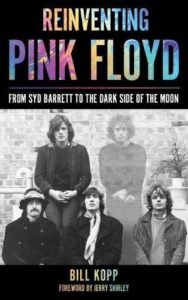 Reinventing Pink Floyd: From Syd Barrett to The Dark Side of the Moon

For Pink Floyd fans, the 2016 release of The Early Years 1965-1972 boxset was a way in which to finally, near-comprehensively, possess officially-sanctioned completitist status for roughly one-third of the band’s storied history, including an era (which I refer to as “Transitional Floyd”) which is alternately derided and cherished by fans and band members alike.  It also granted an opportunity for cultural critics to closely examine the historical movement of a band looking to evolve in all ways: artistically, musically, financially.  Music journalist Bill Kopp is one of the first to do so with his book Reinventing Pink Floyd, which traces the trajectory of the band’s history through a primarily musical analysis of the years 1966 through 1973, from their professional debut with the early singles and the album The Piper at the Gates of Dawn to the worldwide popularity and iconic status as granted by the release and success of the 1973 album The Dark Side of the Moon.

What occurred between these points has been previously chronicled by other journalists and archivists, but more from a perspective of personal and cultural history, and less so in terms of musical analysis and artistic development.  The only other book extant which focuses on this particular period of the band’s evolution is Barry Miles’ The Early Years, published in 2006.

As I’ve noted, Kopp’s chronicle is focused squarely on the music – as he states in his introduction (cleverly-titled “Why (Another Book About) Pink Floyd?”), his thesis is directly presented to the reader, who may or may not consider themselves thoroughly familiar with the band’s history.  “The goal of…[the book]…is to explore that little-known period, discovering clues to the band’s eventual direction by examining what Pink Floyd did in those years.”

Pink Floyd could be considered to have an organic evolution as an artistic entity, initially gaining notice as a live act (although one which not everyone believed they understood) and then as a group with an eccentric charismatic leader directing their early output then withdrawing from public life and potential ascendancy almost as quickly as he had been awarded acclaim.

In the years to follow the band would gain a new guitarist and work collaboratively to experiment with style, structure, mood and the expressive concerns which would come to inform what is considered the greatest output of their oeuvre. As Kopp states: “The Dark Side of the Moon didn’t create itself out of nothing,” and the albums, side projects and performances all contain indicators of what was to finally coalesce in the grand statement of DSotM.

Those five years between Syd Barrett’s departure and the release of Dark Side is full of activity and interesting experiments in an era which was much more indulgent of such creative wandering.  Besides the albums there are sections dealing with other notable projects, such as “The Man and The Journey” and “Embryo,” which were each performed live but never officially released on record.  The involvement of the band (save Nick Mason) on Syd Barrett’s two solo albums The Madcap Laughs and Barrett is also detailed and analyzed.

Kopp’s book leads the reader through each year of the chosen span, each section covers a single year (although 1970 is broken up into two sections, while the years 1971-1973 are combined into two sections) chronicling the major artistic developments, assessing each project, and also commenting upon all the band’s performances on BBC Radio, championed as they were by such national tastemakers as John Peel.  In each section all of the music is examined from stylistic and thematic perspectives in terms of how it developed and was utilized, as well as a critical examination of its’ inherent potential or lack thereof.

Kopp’s style is thoroughly professional – well-written and with a polished flow – weaving together chronology and critical commentary, supporting quotes from historical sources, and the perspective of those involved to create an informative and interesting document of the era, which should allow long-time fans to perhaps reassess their own opinions of the period, and illustrating for newer fans that there is inherent value to those formative experiments – even those which are considered rather outre and indulgent.

The book contains insightful comments from associates of the band – such as Peter Jenner, Ron Geesin, Jerry Shirley (who also provides an forward to the book) and Willie Wilson, as well as contemporaries such as guitarists Steve Howe (whose ‘60s-era band Tomorrow shared a booking agent with Pink Floyd) and Davy O’List, and also musician Robyn Hitchcock who as most fans know is considered an devotee of and expert on the work of Syd Barrett.  Kopp also speaks with several musicians who are engaged in the cottage industry of Pink Floyd tribute bands and broadcaster Craig Bailey whose syndicated radio show Floydian Slip has been nourishing the faithful for over 20 years.

As fans make their way through all of the minutiae on offer courtesy of The Early Years boxset, one could consider Kopp’s book an essential accompanying commentary featuring details which illustrate that whatever the outcome of the various paths and methodology which Pink Floyd followed to attain their creative zenith and commercial success, their interstitial labors proved the zeitgeist moment via The Dark Side of the Moon was no fluke – their artistry was meant to find its’ way into our shared cultural consciousness, continuing to resonate for generations to come.

Reinventing Pink Floyd will be published in hardcover on February 15th.

AFG has managed to secure an exclusive Interview with author Bill Kopp to be conducted by Julie which shall be published online very shortly.

Our extreme gratitude go out to Julie Skaggs for all her hard work and contributions.