↓
Home→News→Pink Floyd To Release Hey Hey, Rise Up With Additional B Side On 7″ VInyl and CD Single 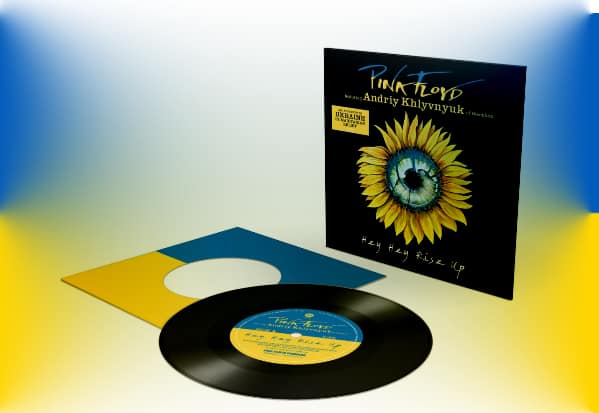 Pink Floyd are releasing two physical versions of their first newly recorded music in over 25 years, ‘Hey Hey Rise Up’.

The single, which was initially released digitally in April in support of the people of Ukraine and was #1 in 27 countries, will be available on 7” and CD single. Both formats will also feature a newly reworked version of ‘A Great Day For Freedom’ taken from the band’s 1994 album, The Division Bell.

The single will be available on 15 July (excluding Japan – released on 3 August – and USA, Canada, Australia and Mexico – released on 21 October).

The lead track sees David Gilmour and Nick Mason joined by long time Pink Floyd bass player Guy Pratt, with Nitin Sawhney on keyboards, and features vocals by Andriy Khlyvnyuk of Ukrainian band Boombox. Proceeds for the physical release and the ongoing digital proceeds will go to Ukraine humanitarian relief.
For this limited edition release, David Gilmour revisited The Division Bell track ‘A Great Day For Freedom’. He has reworked the song using the original tapes which feature Nick Mason on drums and Richard Wright on keyboards, along with backing vocals from Sam Brown, Claudia Fontaine and Durga McBroom. The music for this song was composed by David Gilmour with lyrics by Polly Samson and David Gilmour.
Talking about the inspiration for ‘Hey Hey Rise Up’ Gilmour commented, “Any war, but particularly a war that is started by a world superpower against an independent democratic nation, has got to raise enormous anger and frustration in one. As I said before, I have a small connection there; my daughter-in-law is from Ukraine. And the band Boombox are Ukrainian people that I already knew, not well, but from some time ago. It’s an enormously difficult, frustrating, and anger-making thing that one human being could have the power to go into another independent democratic nation and set about killing the population. It’s just obscene to an extent that is just beyond my belief.”