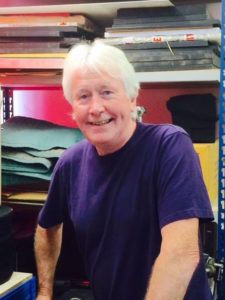 The news was announced by the official Nick Mason Facebook account. “With a heavy heart our Pink Floyd family say(s) farewell to dear Clive Brooks, drum technician extraordinaire, who sadly passed away,” the post reads.

Brooks, a London native, was drummer with bands Uriel, Egg and The Groundhogs in the late-’60s through mid-’70s.
He became a drum technician for Pink Floyd in the ’80s, working on the Momentary Lapse of Reason tour, and The Division Bell album and tour.

According to Wikipedia, on June 13, 1981, opening night of the last leg of “The Wall tour,” Brooks filled in for surrogate band drummer Willie Wilson who was ill.

Phil Taylor has kindly sent us in some further information to share with you all  “Clive Started with Pink Floyd in 1981 as the drum tech for the Wall shows and as you mentioned he did indeed fill in for Willie Wilson on one of the shows as Willie was taken ill just prior to the star, He was involved with Pink Floyd at the Live 8 reunion and also drum tech’ed with Leonard Cohen.”