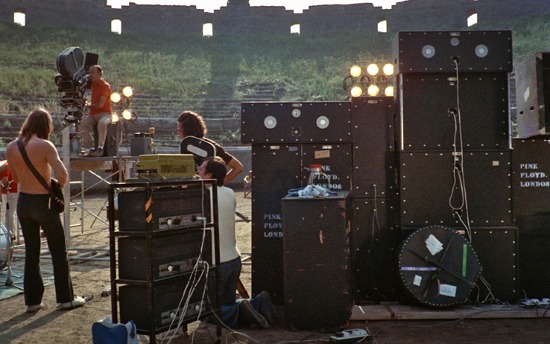 50 years ago to this date saw the filming and cinematic release of Pink Floyd: Live at Pompeii.  Created as a documentary film directed by Adrian Maben and featuring Pink Floyd performing at the ancient Roman amphitheatre in Pompeii, Italy. The documentary sees the band performing a typical live set from the era between the release of Meddle and The Darkside of the moon, there is no audience beyond the basic film crew.

The main footage in and around the amphitheatre was filmed over four days in October 1971, using the band’s regular touring equipment, including a mobile 8-track recorder from Paris (before being bumped up to 16-track in post-production). Additional footage filmed in a Paris television studio the following December was added for the original 1972 release. The film was then re-released in 1974 with additional studio material of the band working on The Dark Side of the Moon, and interviews at Abbey Road Studios.

The film has subsequently been released on video numerous times, and in 2002, a Director’s cut DVD appeared which combined the original footage from 1971 with more contemporary shots of space and the area around Pompeii, assembled by Maben. A number of bands have taken inspiration from the film in creating their own videos, or filming concerts without an audience.

One of the most shared and taled about images from the film is the amount of “WEM” speaker cabinets that were used with some having Pink Floyd London spray painted on the back of them, something of which David Gilmour still uses live to this day.

To celebrate this half a century release A Fleeting Glimpse were invited down to the sunny fields of Cheshire, UK by Chris Hewitt of CH Vintage Audio, Very sadly due to logistics we were unable to attend this but we thank Chris for his personal invite.

CH Vintage Audio was formed by Vintage Audio collector and enthusiast Chris Hewitt and has seen various pieces of his collection used in many films over the years, including the latest Queen biopic Bohemian Rhapsody in which the pre Queen band “Smile” were seen playing.

After 4 years of collecting various equipment to coincide with the 50th anniversary of Live at Pompeii, Chris and his trusty team have acquired and re-created the entire “WEM” speaker setup identical to the one used in the original 1971 Film,