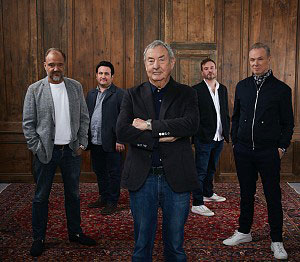 If you have anything Nick related that you think may be of interest, drop a line to liam@pinkfloydz.com

Nick Mason’s Saucerful of Secrets made their debut at a sold-out test show at Dingwalls, a 500-seat club in London, in May 2018. This was followed by three small shows at the Half Moon, Putney, a European tour in September 2018, and a North American tour in 2019. On 18 April 2019, Roger Waters surprised the audience at the New York Beacon Theatre by joining the band to sing “Set the Controls for the Heart of the Sun”. The band was due to begin a European tour in April 2020, but this was postponed to 2022 due to the COVID-19 pandemic.

For more details keep an eye on AFG, or head to http://www.TheSaucerfulOfSecrets.com. Tickets can also be purchased directly through MyTicket.co.uk

For more details keep an eye on AFG, or http://www.TheSaucerfulOfSecrets.com.
UK Tickets can also be purchased through MyTicket.co.uk