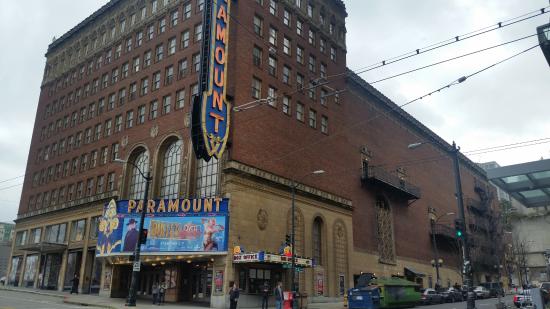 The Paramount Theatre is a 2,807-seat performing arts venue located at 9th Avenue and Pine Street in Seattle, Washington. The theater originally opened March 1, 1928 as the Seattle Theatre with 3,000 seats, and was placed on the National Register of Historic Places on October 9, 1974. It is also an official City of Seattle landmark. It is owned and operated by the Seattle Theatre Group, a 501 not-for-profit performing arts organization, which also runs the 1,419-seat Moore Theatre in Belltown and the Neptune Theatre in the University District. The Paramount was built expressly for showing film and secondarily, vaudeville. As of 2009, the Paramount is operated as a performing arts venue, serving a diverse patron base that attends Broadway theatre, concerts, dance, comedy, family engagements, silent film and jazz. It is considered to be one of the busiest theatres in the region.