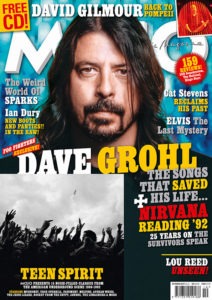 The new issue of the UK’s Mojo Magazine (cover date October 2017, issue number 287) includes – apart from some major coverage of David Grohl – an extensive Live at Pompeii feature with contributions by David Gilmour and Guy Pratt.

“In the october edition of Mojo magazine Last year David Gilmour returned to Pompeii – previously the scene of Pink Floyd’s 1971 cinematic tour de force. As his performance of that show nears release, the man himself presents a selection of shots, captioning them exclusively in this edition of MOJO, while his fellow band member Guy Pratt re-lives the entire adventure.”

“We were looking around and making suggestions for new places to play in the summeer of 2015 we had done a number of lovely venues, some of which were beautiful Roman ampitheatres. Someone said, ‘Hey, why don’t we try for Pompeii again’ We doubted that they’d allow it, but we thought we’d give it a go”

The magazine is in UK stores now, and will be available in selected locations worldwide as an import, in due course. Alternatively, you can buy it online through this link.

It’s eclipse day! For Hard Rock, that can only mean Pink Floyd. For today’s episode of Memorabilia Monday, we’re revisiting our look at some of the incredible memorabilia from the mighty Floyd. Enjoy… 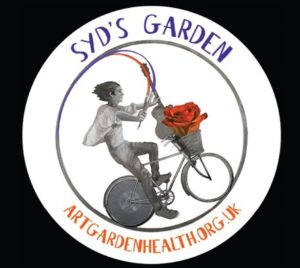 Patients at Addenbrooke’s could soon be feeling comfortably numb in a special Pink Floyd-themed garden.

Two designers are trying to raise money to create a peaceful area where people recuperating from treatment can relax.

It will be called Syd’s Garden, in honour of Floyd founder member Syd Barrett, who was not only a keen gardener himself, but was also a patient at the Cambridge hospital before he died in 2006.

The garden is the brainchild of Stephen Pyle, who played in Cambridge band Those Without with Syd, and who now a scenic sculptor , and Paul Herrington, a garden designer from Fulbourn .

The proposed garden will include a picnic lawn, and also a sculpture of the Pink Floyd star.

The two men started a charity called Art Garden Health three years ago to design, install and maintain gardens for NHS hospitals at no charge, and Addenbrooke’s offered them a plot of land a year ago. 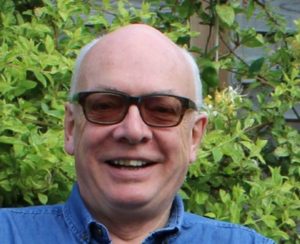 Stephen said: “We’re currently co-fundraising with Addenbrooke’s Charitable Trust (ACT) to create Syd’s Garden and it’s due to open in the summer of 2018.

“The garden will be first permanent publicly accessible commemoration of Cambridge’s celebrated son, Roger (Syd) Barrett. As well as a founder member of Pink Floyd, he was an artist, a keen gardener, and also an Addenbrooke’s Hospital patient before his sad passing in July 2006.

“The garden will feature an elevated sculpture of Roger freewheeling on his bicycle, set in a picnic lawn. Guitar in one hand, artist’s brushes in the other, the sculpture captures the heady pre-Pink Floyd moments of the early 1960s. 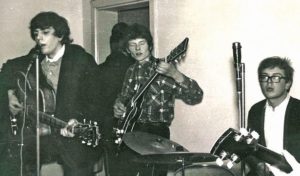 “The site is adjacent to the main multi-storey car park, and is seen by Addenbrooke’s staff as a bitter-sweet threshold between home and hospital – bitter because of worries about a loved one’s health, sweet because of the healing and health education that happens within the hospital.”

If anyone wants to support the scheme with a donation, it can be done via the charity’s website. 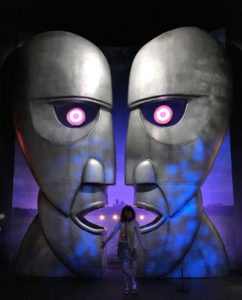 My young man and I arose at an ungodly hour and made the trek from East London to West.  I’d booked tickets for 9am on a Sunday morning in an effort to avoid migraine-inducing crowds.  This proved a smart move, as the exhibition space at the Victoria and Albert Museum was not too over-run with Floydheads.

As we were about to enter, a staff member advised us to go and get headsets.  “But I don’t want a stupid headset!” I wailed.  The staff member was adamant that they were absolutely necessary for complete enjoyment of the exhibition.  I sulkily got one and barely used it – though there were a couple of moments where I reluctantly admit it later proved effective.

Though we baulked a little when the security guards confiscated our freshly bought hotter-than-the-sun coffees, we were soon perked up at the sight of the band’s black Bedford van (nowadays known in Matchbox Cars form as a rather tasty bit of overpriced merchandise).  The decidedly utilitarian post-war vehicle looked like it was designed more with bricklayers and carpet fitters in mind than psychedelic warriors, and its incongruity made the sight of a wall of original psych-scene posters all the more glorious.  In a nice little anglo-centric touch, each decade was introduced with a quintessentially British red telephone box, each filled with newspaper clippings from the time period.  This gave some context to the band’s shenanigans throughout the years, and the headlines were in turn uplifting and alarming. 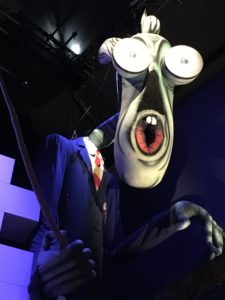 The early-years room had lots of loving attention to Syd’s role in the band’s inception, though his artwork (seen collected in an art exhibition in London in 2011) was sorely missed, as was any mention of his solo albums.  Most notable delights here were Nick’s ridiculous frilly shirts, replicas of Syd’s (sadly lost) Danelectro and mirrored Esquire guitars, super-cute childhood photos of the lads, Syd’s tragically enthusiastic letter about the band’s first recording session and Nick’s “Probably the worst gig ever!” diary entry from 1968.  Minor annoyance – Syd’s bike could have been more visible, but I suppose having it suspended in the air gave it a Wizard of Oz vibe.

On to the post-Syd years… Pompeii and Dark Side had their own displays.  There was an amusing rider from the era stating that the band required, “2 bottles of Southern Comfort, 2 bottles of scotch, 2 bottles of brandy, 1 bottle of tequila, 2 bottles of vodka, 2 bottles of Dom Perignon, 3 bottles of French Beaujolais (bottled in France), beer.”  Rock’n’roll!  There was a Science Museum-esque interactive mixing desk, where aspiring Alan Parsons could mix their own version of Money.  “More bass!” was my request.

Thence followed a room filled with a smorgasbord of instruments.  Roger’s gong!  Nick’s drumkit from The Wall tour, tastefully spraypainted matte grey!  Nick’s gorgeous “Wave” drumkit!  Rick’s sexy Prophet keybard!  Even – gasp! – Dave’s “Workmate” Esquire guitar.  I felt a twinge of sadness for Dave that he had to be parted from it (and the legendary Black Strat) for the duration of the exhibition.  There was also a plethora of ludicrously oversized 70s guitar pedals, which I’m sure the guitar geeks in Floyd fandom would be salivating over.

At each turn, new delights!  The 70s continued with, surprisingly, an area dedicated to Punk.  Now, I’m about as big a punk fan as you could hope to find in the notoriously proggy Floyd fandom, but even I felt that the space could have been better utilised.  Still, it gave some context to the climate in the UK at the time of Animals’ creation, and I did get a thrill from seeing the original cut-and-paste artwork for Never Mind the Bollocks.  Not as big a thrill, however, as I got from seeing a photo from the Animals cover photoshoot covered with Storm’s notes.  I was also delighted by the way the Animals display was enclosed in an appropriately claustrophobic plywood Battersea Power Station.  It should be noted that here, and throughout the exhibition, there were videos (with audio coming through those pesky headsets) of latter day interview footage with the band.  I didn’t bother watching any of them, though I’m sure they were lovely and informative, because I smugly told myself, “I’ve got all this shite on DVD”.

The Wall room was suitably imposing, filled with gargantuan inflatables, stage props, Gerald Scarfe artwork, and a baldy Roger mannequin in a replica Nobody Home hotel suite (sporting Converse like the Roger of today).  In amidst all the arena-show regalia, concept art and creepy rubber masks was a seemingly innocuous old object – a cane.  The same cane, I kid ye not, that was used to beat poor young Roger, Syd and Storm when they were mere whippersnappers.  Does this mean we need to thank the horrors of corporal punishment for one of the greatest albums of the 70s?  Probably. 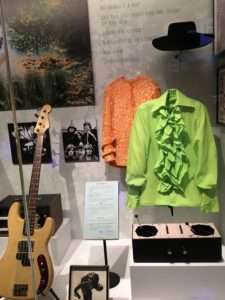 Sadly, The Final Cut, an album long overlooked yet beloved to me and legions of other mopey Roger enthusiasts, was woefully unrepresented.  It’s a travesty, because there are plenty of photos from the recording sessions, even if the album wasn’t given the audacious tour treatment.  Also glaringly amiss was anything to do with The Wall movie, or the band members’ solo careers.  Like, seriously, no Blue Light video?!!  And I sort of felt that in among all the equipment, photos, mementos, posters, records, artwork, clothing, plans and oddities, there was a crucial aspect of the band missing – personality.  There was little to convey the sense of them as people (with the exception of Syd, whose adorable psychedelic pixie persona was embodied in the absurd “Fart Enjoy” book alone).  But then, this is the decidedly non-cuddly Pink Floyd we’re talking about here, so perhaps that was intentional.

It was headlong in to the 80s for Pink Floyd’s post-Roger reinvention as a touring behemoth.  Little in this A Momentary Lapse/Delicate Sound of Thunder room, and the following Division Bell/PULSE room, made reference to the recording of the studio albums (The Endless River didn’t even get a look-in), but there were plenty of treats in store when it came to the planning and execution of those insanely high-tech shows.  The biggest (literally and figuratively) treat was the actual Division Bell statues, which, along with the display on the making of the AMLOR cover, was an awe-inspiring reminder of the lengths that dear departed Storm Thorgerson went to in order to make the album covers REAL.

Lastly, there was a huge auditorium encircled with screens showing the videos for Arnold Layne and High Hopes, ending with the finale to end all finales, the band’s final performance as the classic four-man Floyd, Comfortably Numb at Live 8.  All in stupendous surround sound!  The perfect audio-visual climax.  Hundreds of Floyd fans all standing silently in a room, staring at the walls, united in awe yet isolated from each other by headphones. 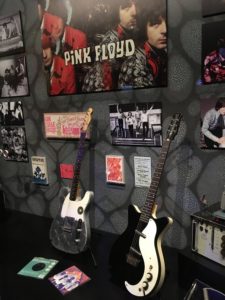 Then it was “Exit through the gift shop”.  And what a gift shop!  In the words of The Wall’s groupie – “This place is bigger than my whole apartment!”  Badges!  Books!  Records!  Toy pigs!  I could have spent a small fortune there, but I was a good girl and just bought one kickass t-shirt.  Then it was off to see the V&A’s lifesize replica of Michaelangelo’s David and imagine him toting a red Strat.

Overall verdict:  There’s a good 2-3 hours of Floydy fun to be had here – a bargain by London prices!  Hell, I’d go every week if it was on my doorstep.  There’s something for all types of Floyd fans here – from the “Syd was the true genius and I have a great theory about how Roger deliberately sent him mad to take over the band” brigade to the “I bought this Dark Side t-shirt in Primark” casuals to the “I have 47 copies of WYWH and no box set is too expensive” die-hard collectors and the “If you’ve spent less than £10k on your hi-fi then you can’t appreciate the nuances” audio Nazis. You will all love it and so will your nans.  I urge you, go!  Or live with the regret until you are so consumed by it that you write a concept album.