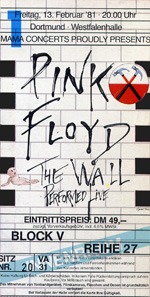 The Tour Book that is featured here was used for the 1981 part of the tour and was obtained at the 13th February 1981 Dortmund – Germany Show by Jan Enzlin. The 1980 Tour Book differed slightly, in that on Page 3 Snowy White is shown on guitar (as opposed to Andy Roberts, who later joined the tour). Stan Haas’ name has been incorrectly spelt.(It’s actually Jim Haas).

2000
Roger Waters In The Flesh

2006
David Gilmour On An Island