Vernon first began listening to, and collecting, Pink Floyd in the 1960s. As the years progressed, his collection grew, and in the 1970s he started The Pink Floyd Archives, a private collection of Pink Floyd records and memorabilia for the purpose of documenting the history of the band. Some of the earliest works to come out of The Pink Floyd Archives were his booklets on Pink Floyd live recordings. He was/is an avid collector of concert tapes, and he accumulated a large collection of live recordings of Pink Floyd concerts shortly after the concerts took place. In order to document the various tours, he put together a booklet titled, A Collector’s Guide to Pink Floyd Live Recordings, in which every recording was listed by date and venue, along with every song on each recording carefully timed by hand via stopwatch. He later issued A Collector’s Guide to Pink Floyd Videos, in which every video in the Archives was carefully catalogued by venue, date, length, timing, and quality, with every song listed along with its timing. These two guides, which were put together long before the Internet, were some of his first forays into Pink Floyd historical research.

Although his Collector’s Guides made his live Pink Floyd collection most visible, he was also collecting a wide range of Pink Floyd items, including concert posters, records, singles, newspaper and magazine articles, backstage passes, books, etc. By doing so, The Pink Floyd Archives became one of the largest collections of Pink Floyd information in the world. In an effort to share information about the band, he began helping out various Pink Floyd fanzines, such as The Amazing Pudding and Brain Damage, by writing articles for them. Early issues of these publications are filled with his contributions, including early Pink Floyd discographies (these can be found in early issues of Brain Damage-the discographies were so big that they had to be run over the course of multiple issues). He also contributed to various books, such as Andreas Kraska’s book “Pink Floyd-The Records” (he helped compile the discographies, wrote the Pink Floyd tour date listings, and contributed information on the sources of Pink Floyd bootlegs, all under an assumed name), and “Pink Floyd-The Visual Discography.” In addition to print media, he also helped out MTV (and later VH1 and the BBC) with their Pink Floyd specials, often times at the request of the band. Many Pink Floyd documentaries that have been seen and heard over the years would not be what they are without the help of The Pink Floyd Archives.

In recent years, he has helped the band directly on some of their various projects, including Live at Pompeii DVD and the recently released PULSE DVD. He has also written a number of books on the band, including the acclaimed Pink Floyd Encyclopedia, and Pink Floyd-The Press Reports. But perhaps the most fascinating work he has done to date is his latest book, Comfortably Numb-A History of “The Wall.” 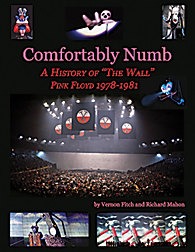 The Comfortably Numb book is an amazing look behind the scenes at the creation, recording, and performances of Pink Floyd’s landmark album, The Wall. It took ten years to research this book, and during that time he had numerous discussions directly with the people that worked on The Wall album and stage shows. By doing so, he and co-author Richard Mahon wrote the first detailed history of Pink Floyd for the years 1978 through 1981. The Comfortably Numb book goes into great depth about the inner workings of the band, and features pictures from the time period, most of which have never before been seen outside of the band’s inner circle. The book also includes a look at the studios that were used for the recordings, four demos of The Wall with alternate songs order, an accurate listing of who played on the various songs on the album (compiled exclusively for the book by David Gilmour), a pictorial look at The Wall stage shows, a worldwide Wall discography, and even a detailed section on the equipment used to record The Wall album and perform The Wall stage shows (compiled with the assistance of Phil Taylor and James Guthrie). This book is Vernon’s most accomplished work to date. It was designed by him and published by his publishing company PFA Publishing, Inc., a publishing company he created for the purpose of publishing unique works about the band.

The Comfortably Numb book is a deluxe limited edition, with each copy hand stamped, numbered (only 5,000 were printed) and signed by both the authors. It is available for $39.95 plus shipping exclusively from PFA Publishing at: www.PFAPublishing.com