First, I would like to publicly thank Shuki Sen from Pink Floyd’s Management for giving so freely of her time. This is the second time in less than a year that Shuki has made herself available to answer questions, and give background information on matters concerning the band. Shuki, THANK YOU. 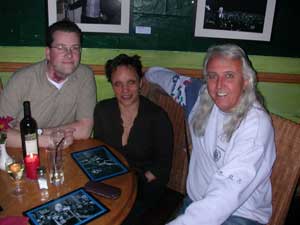 Matt Johns from our sister site Brain Damage & I made our way to the Pink Floyd offices late in the day on 12 April (Pictured, ). Shuki had kindly consented to seeing us again after learning that I would once again be flying to the UK from Australia (The last time was for Live 8).

I felt I was meeting with a friend I had known for years, as the ever attractive Shuki welcomed us once more.

Within the first few minutes of meeting up I found myself holding the the cover of the upcoming PULSE DVD, and of course this immediately prompted the question of the release date. The situation is this. The release date is still on schedule for September 2006, but if the ‘masters’ are delivered earlier than that, then they will try for an earlier release date.

We then briefly chatted about the Wish You Were Here SACD, which is still ‘sometime in the future’. It’s likely to be some time before this surfaces.

Daily I receive emails asking me how fans can contact members of the band. I asked Shuki about this. Unfortunately a lot of fan mail goes unanswered, simply because there is nobody to handle this. However CDs and videos (and there are many) are returned to the sender, as are items that fans send in for signature. The band rarely sign items any more, as they usually seem to end up on eBay, and it is impossible for Pink Floyd Management to distinguish what will and what won’t be sold on.

We spoke briefly about Nick’s book tour, and how he is enjoying promoting it in all parts of the world. I asked if Nick would ever come to Australia for the promotion, and I’m pleased to say it’s not out of the question, although it’s not currently planned. (Shuki had been in Germany the previous week with Nick).

Shuki also told us that at this time Nick is only confirmed to play with Roger at the French Formula 1 Grand Prix show on 14 July. NO OTHER DATES ARE CONFIRMED, although it’s thought that Nick may play at a ‘few’ of the other big shows (Possibly LA, New York & London, although I am surmising this)

We then spoke about Rick. A big surprise is that Rick is fired up to do another solo album! This is the reason that he will not be performing DSOM at any of Roger’s shows, as Rick wants to put all his energy into his solo album when he finishes David’s tour.

Matt & myself were then given a T-shirt each before we went out for a meal with Shuki, and more convivial conversation.

Obviously our conversations contained a lot more than I have been able to report on here, but the most salient details are above.

Another most enjoyable time, spent with two lovely people. Thank you Shuki & Matt.