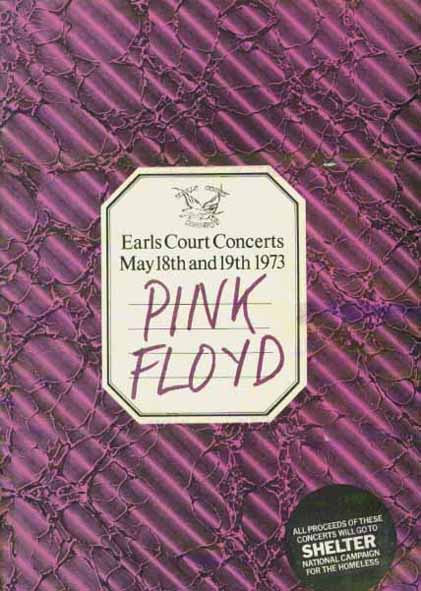 On May 18th & 19th 1973 Pink Floyd played 2 sell out gigs at Earls Court (London). The audience was estimated at 18,000 for each night. Many bands had failed to fill Earls Court in the past and the previous week, David Bowie had trouble pulling a crowd at the same venue.The question at the time was ‘could anybody fill Earls Court?’. Pink Floyd of course proved it could be done, not once but two nights in a row!!. As can be seen above all proceeds from these concerts went to ‘Shelter’.

The show featured, Obscured By Clouds/When You’re In, Set The Controls For The Heart Of The Sun, Careful With That Axe Eugene, and Echoes, Dark Side Of The Moon suite, with One Of These Days played as the encore. The Friday night show (18th) was the first time Floyd used the crashing plane effect during a performance of Dark Side Of The Moon. Floyd were accompanied by Dick Parry on sax and backing vocalists Venetta Fields & Carlena Williams. The pictures you are about to see, were taken by Stephen Johnson to whom we thank for the use of these historic images.

There are a number of newspaper clippings (Not featured here) that you can DOWNLOAD if you so wish. (Zip file)