Available from 27th June 2021 on Itunes, Spotify and all other Listening Platforms. Click Here to be taken to Apple Musics Listening Page 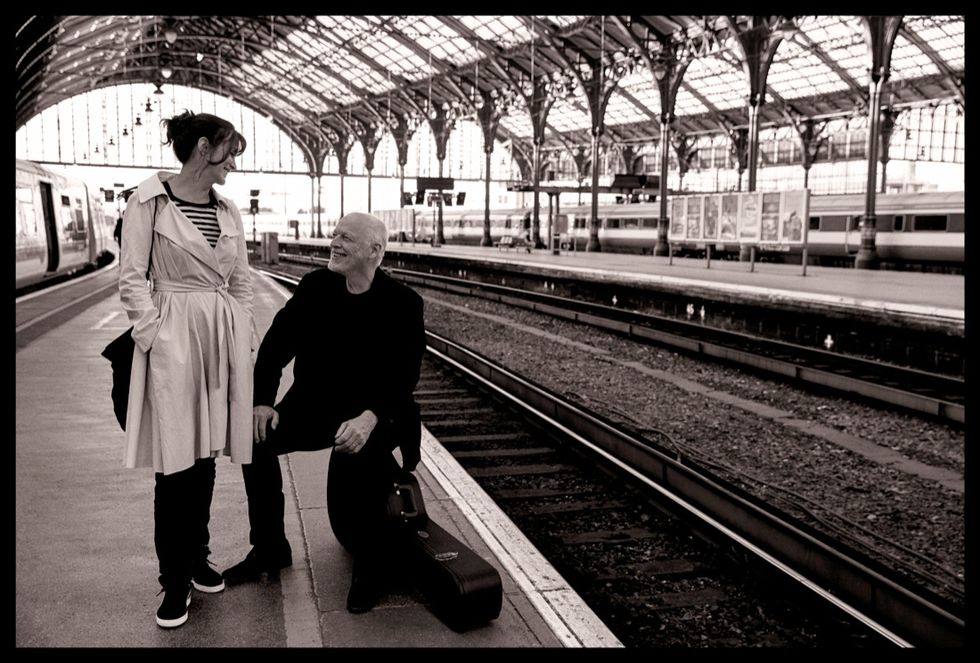 David Gilmour released Rattle That Lock , the fourth solo album, in the summer of 2015.

His French fans especially remember the song that gives the album its title because it incorporates the jingle of the SNCF , the national railway company. The four musical notes that make up the jingle (C, G, A flat and E flat) have been used by the SNCF since 2005, in particular to introduce announcements in stations.

It was precisely taking the train in the summer of 2013 in Aix-en-Provence that David Gilmour fell in love with the melody. He urged his manager Paul Loasby to research the rights. It turned out that the melody was created by Michaël Boumendil , a specialist in jingles for companies, also author of a ringtone for Samsung mobile phones, music on hold for Orange, etc …

A very profitable business: his company Sixieme His Communication , created in 1995 just 23 years after leaving Edhec, achieved a turnover of 4.5 million euros in 2018, with a net margin of 19%. 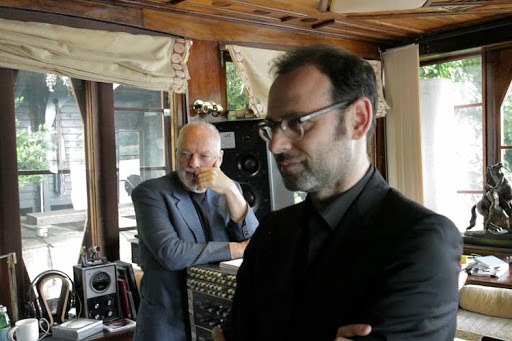 With great pride, Michaël Boumendil told his story to the RTL TV station on July 9, 2015, just before the song was released: “It makes me really happy […] David Gilmour told me: ‘what you have done is truly unique , it’s very well done, surprisingly groove, and it made me want to write a song ‘” . In the interview Michaël Boumendil assured: “It is not a question of money at all” . In addition, the SNCF was also launching a competition to win tickets to a David Gilmour concert.

But Michaël Boumendil‘s interview with RTL didn’t please David Gilmour‘s entourage ; they believed that the Frenchman had violated the confidentiality agreement while the song had not yet come out; as a result, they excluded him from promoting the album.

Relations between the two deteriorate. In December 2016, Michaël Boumendil denounced David Gilmour for “counterfeiting” before the Tribunal de Grande Instance de Paris, asking € 493,619 in damages. He argued that the agreement signed two years earlier only covered copyright but not its production right. In other words, he claimed to have only granted the musical score (the four notes), but not their recording (the jingle that David Gilmour had recorded at the station and then inserted into his song).

Instead, on May 31, 2019, the court rejected Michaël Boumendil‘s claim , condemning him to pay 40,000 euros in legal fees. In the sentence, the judges observed that, the day after the meeting with Gilmour , “Michaël Boumendil had expressed the memory of the meeting in a message, leaving no trace of surprise or disappointment” . Furthermore, the sentence still states that the enthusiasm expressed during the interview with RTL “does not appear to be compatible with the hypothesis of violation of the contractual provisions, negotiated between professionals under conditions that do not lead to the presumption that the rights of the producer would have been ‘forgotten. ‘, as claimed ” by Michaël Boumendil .

Who did not give up and appealed, but again in vain. The Paris Court of Appeal has just rejected him, condemning him to pay an additional € 10,000 in legal fees. The appellate judges noted that the contract “states that David Gilmour is authorized to integrate the sample, modify it and use it; therefore, the sample can be understood as the excerpt of the sound recording ” of the SNCF jingle .

Pink Floyd‘s 1970 album Atom Heart Mother is to be reissued in Japan as a special CD+blu-ray package with restored video footage of the band’s performance at Japan’s first outdoor rock festival, Hakone Aphrodite.

Recently discovered 16mm film has been restored and digitised resulting in a transformative visual image, as can be seen by the comparison below.

The festival was on the 6 and 7 August 1971 and this was Pink Floyd’s first visit to Japan.

This combo-pack features the album on CD and the video of the live performance on the blu-ray along with ‘Scott & Watts’ – Hakone Aphrodite B-roll footage.

Because this is a Japanese release, (exclusive – thought to be down to licensing issues), it is lavishly packaged. 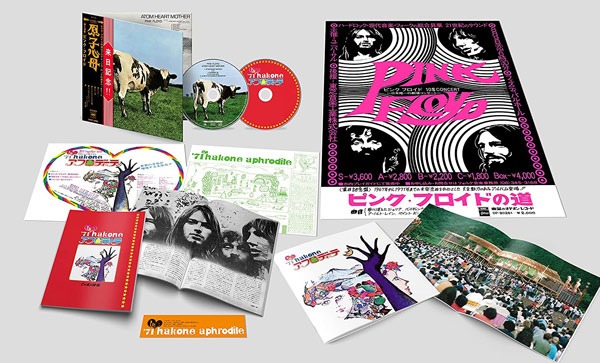 It comes in traditional Japanese ‘paper sleeve’ packaging but it’s seven-inch square, not standard five-inch, CD-size. In fact, if you order from Amazon Japan what they are calling a ‘mega-jacket’ (24cm x 24cm, or about 9.5 inches) is also included, although these are limited on a first-come-first-served basis.

This presentation comes with a whole host of paper items including a reprint of the OBI-strip, a photo booklet of unpublished photos, a Hakone Aphrodite programme reprint, a reproduction of the venue guide map, an Osaka performance poster, a Hakone Aphrodite ticket reprint and access to a special digital booklet, Recollection Hakone Aphrodite 1971.

As well as Amazon Japan, this is also available via CDJapan (note that Amazon Japan doesn’t except existing Amazon credentials, you have to create a new account).

This weeks episode is Number 42 and features guest Paul Stanley. (Kiss) Paul is a huge fan of soul and talks to the chaps about his beautiful new solo soul record on his new album ‘Now and Then’. Paul pays homage to some of the greats with a collection of classic covers and also a set of stunning original tracks that totally hold their own. Paul Stanley explains the roots of the iconic Kiss look that originated from their love of some classic British artists…

Check out the Podcast HERE 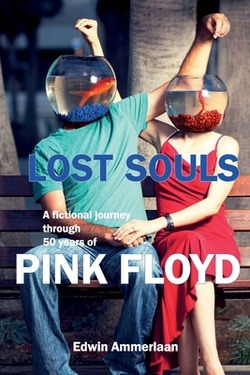 Like most dedicated Pink Floyd fans, I have amassed quite a collection of literature about the band, (a quick glance at my bookshelves reveals at least thirteen tomes by various scribes) and have even considered writing one of my own, but I have never considered the format chosen by Edwin Ammerlaan in his book Lost Souls – A Fictional Journey Through 50 Years of Pink Floyd where the author has placed himself as a fictional central character in the work called Matt.

As the story progresses, Matt becomes an observant bystander to the very inner workings of the band’s lives. It’s a great idea and I would especially recommend this book to younger fans who are just embarking upon their voyage of discovering Pink Floyd. For well-read old dogs like myself, it is fun to spot paragraphs lifted verbatim from interviews that have been published down the ages.

Pink Floyd refer to old friends of the band who hailed from Cambridge, (Dick Parry, Storm Thorgerson, Tim Renwick, etc), as The Cambridge Mafia and the premise of the book is that the narrator finds himself circulating in one of the band’s outer circles after a chance meeting involving a bike, Roger and Syd in Ibiza, Spain. Over the years, he is drawn closer towards the band’s beating heart to see what life is really like behind the wall of rock and roll. The style is languid and easy to read, not at all pure gonzo in the Hunter S Thompson vein and is a wonderful journey through the band’s existence.

As Lost Souls is written in an evolutionary, chronological layout, one can listen to the band’s music in a similar fashion, starting out with the early albums and moving on to the later, massive hits such as The Dark Side of the Moon and The Wall as the story progresses. Matt’s not always around in the Floyd circus, however; he has his own life to run as well. He dips in and out of the band’s lives during the barren, rocky years of the Floyd Wars and beyond the horizon of The Division Bell and onwards to Roger Waters’ latest solo album Is This The Life We Really Want? Oddly, David Gilmour’s solo albums On An Island and Rattle That Lock and his utterly brilliant live albums Live in Gdansk and his incredible return to Pompeii aren’t mentioned at all.

The band’s performance at Live 8 is a fitting way to tie up the many loose ends of the Pink Floyd story and a meeting with Roger Waters in a London hotel room proves that the old dog that has broken away from the pack still has teeth.

The final paragraphs cover London’s Victoria and Albert Museum’s Their Mortal Remains exhibition and the narrator’s amazement that this quirky underground band formed by three architects, an artist and a van-driving guitarist had gone on to become one of the biggest musical forces in the world.

Our sincere thanks go to Richard for all his efforts and contributions.