Nick Mason seems to be enjoying being back out on the road, With the european tour in full swing the band have just announced 3 more dates as part of their busy 2019 tour.

The new additions see the band heading to Prague, Poland, Italy. Its an exciting time to be a floyd fan.

A few more issues have arisen for the Zee – Identity 2019 Reissue. 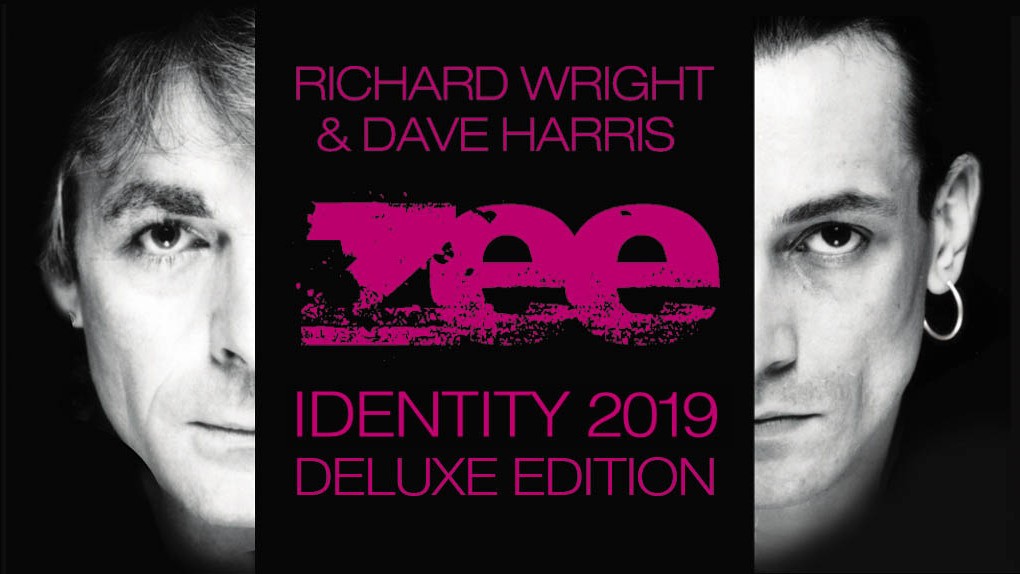 A Statement from Dave Harris reads – ” My dear friends, the curse of ‘IDENTITY 2019’. I have been made aware today that there is a problem at ‘Burningshed’ and they are refunding money to anyone that has ordered ZEE from them. I am shocked because the response and sales from around the world have been really good.

My agent is presently mid flight back from the States and I have no more information than this right now. I will inform you all of what is happening when I find out tomorrow. I have total faith in Rob and know this will all be sorted very soon. ❤️❤️ “

We will update you all as soon as more information becomes available. 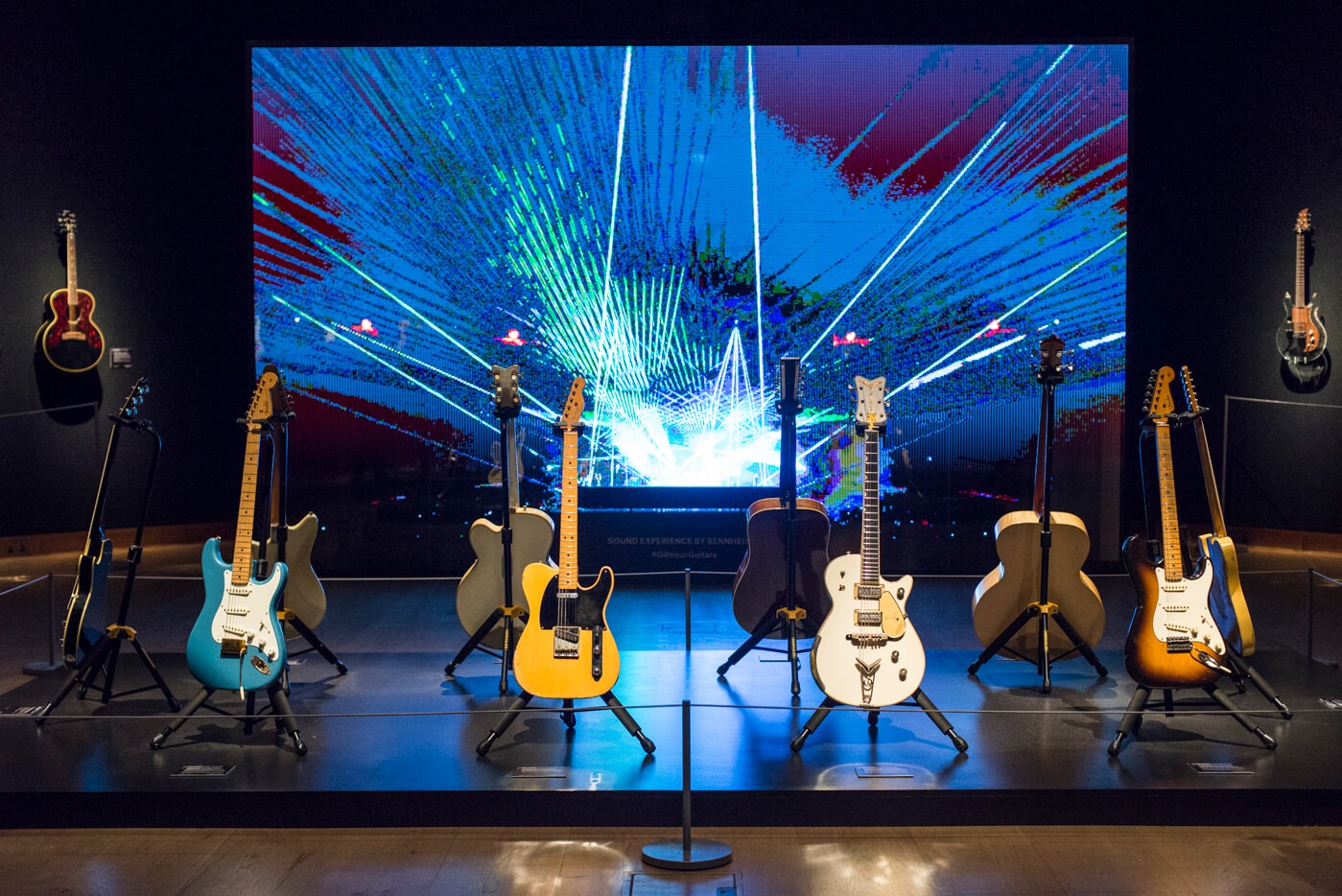 In January, Christie’s announced details of David Gilmour’s intention to auction over 120 instruments from his personal guitar collection in New York on 20 June 2019, with the sale proceeds benefiting charitable causes.

Sure to be the most lucrative guitar auction in history, the collection comprises guitars that the Pink Floyd star has used throughout his career, including his famous black 1969 Stratocaster aka ‘The Black Strat’. Other highlights include the all-gold 1955 Les Paul used for the solo on Another Brick In The Wall (Part 2) and the white #0001 Stratocaster used to record the song’s rhythm part. 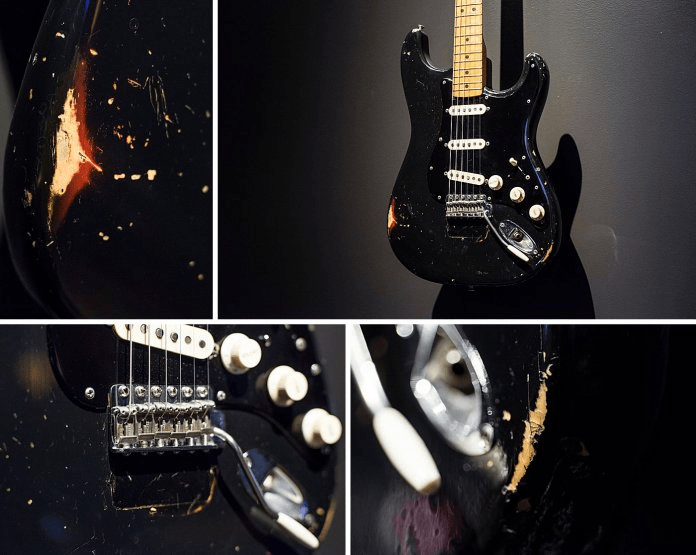 Wednesday 27 March saw Christie’s host a special media preview of the pre-sale exhibition at its London saleroom. Featuring every instrument in the sale, the exhibition will be open to the public until 31 March. Entry is free, with timed tickets available via the auction house. Highlights of the sale will then be exhibited in Los Angeles from 7-11 May, before the collection is reassembled for the New York sale preview from 14-19 June.

Wish you were here?

This morning’s media preview event begins with the auction house’s musical instruments specialist Kerry Keane opening The Black Strat’s case in front of a scrum of photographers, declaring, “Here is the most iconic guitar in rock ‘n’ roll history.” After marvelling at the jaw-dropping array of guitars on display – including so many with voices familiar to millions of music fans across the globe – we sit down with Keane to find out more. 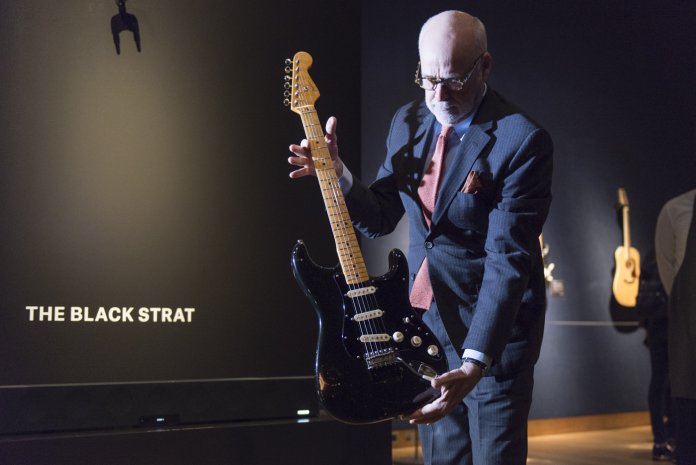 “It’s an extraordinary collection and it’s wonderful to be surrounded by guitars of this quality,” says Keane. “We have good expectations, as does Mr Gilmour. The important aspect there is the mission. The mission of this sale is for proceeds to fulfil those philanthropic passions that Mr Gilmour has.”

“I’ve had a few wonderful conversations with him and a day spent with him back last year, talking about the collection and talking about what excited him and the guitars that he’s passionate about,” Keane continues. 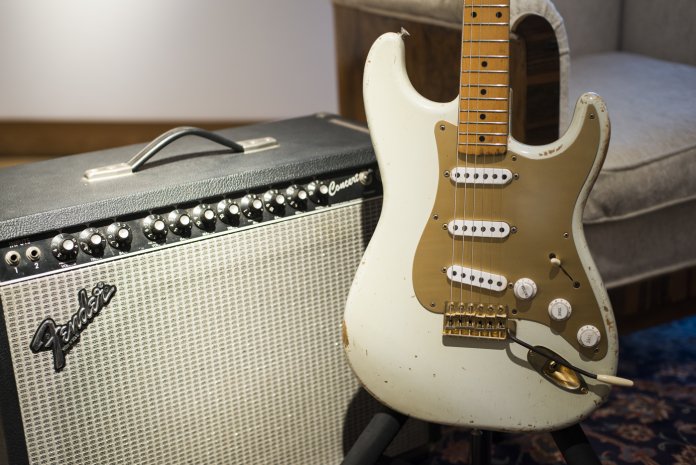 “When I first started vetting the collection, it became evident that there are instruments here that exhibit a wide berth of guitar history, from the very early Rickenbacker [lap steel] to more contemporary guitars made maybe only 10 years ago.”

“In his instrument collection, when it concentrated say on Fenders, I was excited to find an extraordinarily pure Esquire, the magnificent ’52 Blackguard Telecaster, a couple of Broadcasters, a ’54 Stratocaster, that’s fun stuff.”

And it’s not just Fenders: “One turns their back and they look on the other side of the room and here’s this terrific ’55 Les Paul that gave that thick and rich solo to Another Brick In The Wall. What I find interesting is, it is obligatory for any rock guitarist to own a Les Paul, but they tend to gravitate towards humbuckers.” 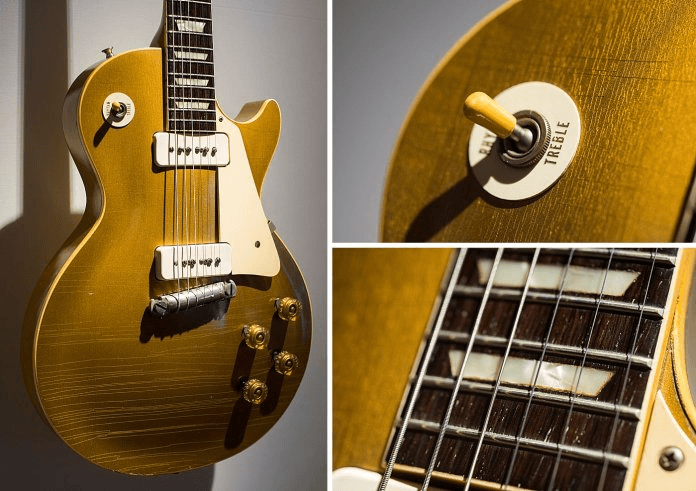 “Mr Gilmour is a single-coil man, and he loves P-90s. He described it as giving a ‘raunchier sound’. In his hands, that solo is spectacular. It’s rich, thick and lyrical. What he pulls out of that P-90 is quite phenomenal.”

Although the likes of The Black Strat will inevitably grab the headlines, Floyd fans should fear not – there are guitars in the catalogue that are much more accessible. “There are instruments priced here from $300,” states Keane. “There’s all price points. When one looks at the Takamines, the very reasonably priced Ovations, here’s an opportunity for a collector or musician to buy a guitar that’s reasonably priced that David Gilmour played.” 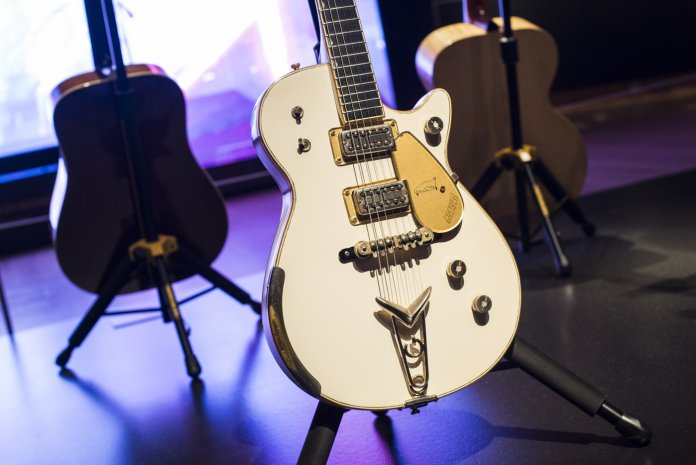 “He’s obviously still touring and performing, so he has kept some guitars for that,” adds Caitlin Graham, pop culture specialist at Christie’s. “But I think we really have the most recognisable and significant guitars from his career in the sale.” 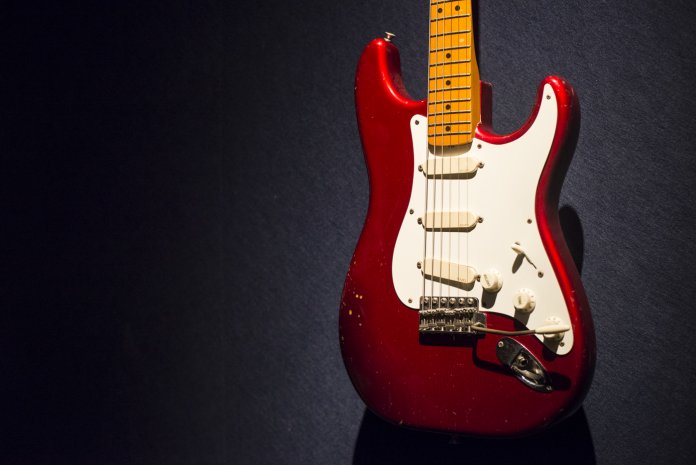 Acquired in 1984, this Strat was Gilmour’s main live squeeze for the next two decades

“There’s the Black Strat, the red Stratocaster that he played for 20 years when the Black Strat was retired for a period and some really lovely acoustic guitars that have been used in the studio since the 1970s. These include the Martin D-35 that has been David Gilmour’s primary studio acoustic since 1971.”

This sale is emphatically not an indication that David Gilmour is set to retire from music, but we’ll leave the final word to the man himself: “Many of the guitars in this sale are guitars that have given me a tune, so a lot of them have earned their keep, you might say,” Gilmour told Christie’s. “These guitars, they’ve given so much to me, it’s time for them to move on to other people who hopefully will find joy and perhaps create something new.”

Stay tuned for more from the David Gilmour auction pre-sale in the coming days. 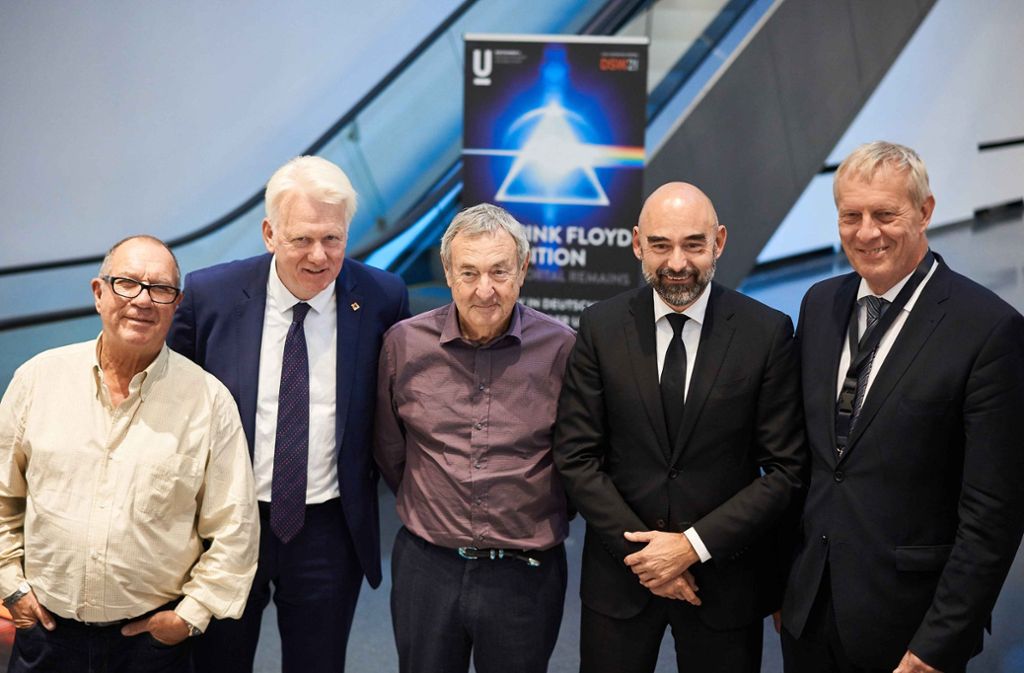 Aubrey Powell recently confirmed in a Press release confrence for the opening of Pink Floyd – Their Mortal Remains in Dortmund, that not only is he working on the Animals 5.1 SACD release due early next year. He is infact working on a secret new box yet entitled The Later Years which is a elaborate box set of their collected work of Pink Flloyd between 1987 – to present (Roger Waters quit the band in 1986 and is not featured on the last 3 studio albums or acompanying tours)

It was Aubrey Powell himself who confirmed that he is currently working on not only the exhibitions “Hipgnosis – Daring To Dream” and “Pink Floyd – Their Mortal Remains “ , but also a still “secret” new box set, or two, and is keeping himself busy.

It was also stated in the confrence that  the elaborate box set should be available in November. He already has ideas for the cover.

Following this new information a member of Pulse and Spirit, our friends over at the german based fanzine posted that

“ I was in Wilhelmshaven on Sunday and there I had the opportunity to ask specifically! The LATER YEARS BOX should therefore be released in November 2019, including the complete concert of the Nassau concert in 1988 as part of the Delicate Sound Of Thunder tour … Also for the new ANIMALS cover he has become active, it will show the Battersea in the conversion with the construction cranes in the evening light! This should come in early 2020, whether as a boxset he could not or did not want to say … ”

We will of course keep you upto date as more information becomes available.