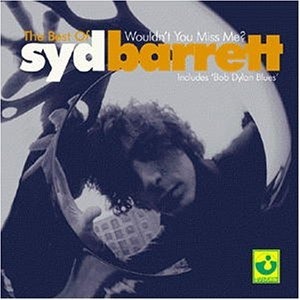 First Again! A Fleeting Glimpse was the first to bring this story to the world! Beating all other media, including Rolling Stone & Record Collector!

On April 16th 2001 EMI released the Syd Barrett compilation album “Wouldn’t You Miss Me,”. The album features the long lost “Bob Dylan Blues” that was recently given a ‘buff & polish’ The song, a solo, acoustic track that lampoons Bob Dylan in its lyrics and in its talking blues style was recorded during a February 1970 demo session. The song, which has been kept in David Gilmour’s private collection for over 30 years, was released with David’s blessing. (Possibly due to the royalties Syd will receive?)

For the first time in the UK, Harvest release a ‘best of’ Syd Barrett compilation. Titled ‘Wouldn’t You Miss Me? The Best Of’, this 22 track CD contains a selection of Syd’s ‘best’ work culled from his two studio albums, ‘Madcap Laughs’ and ‘Barrett’ and the rarities album, ‘Opel’, together with the previously unreleased and much sought after, ‘Bob Dylan Blues’ (an outtake from 1969, which has made its appearance due to Syd’s longtime friend and fellow Pink Floyd member, Dave Gilmour giving EMI permission to use the track). Also included is a BBC session track, ‘Two Of A Kind’.

Syd Barrett’s music has influenced many artists – this compilation not only serves as an excellent reminder of a genius at work, but makes the perfect sampler for a whole new generation wishing to hear who it was that influenced some of their favourite bands, and of course a chance for fans to hear the unreleased track for the first time – a pure gem! 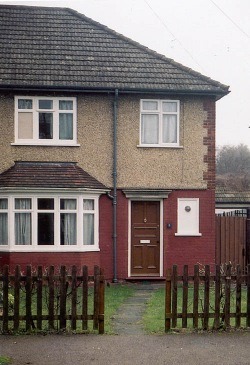 There are magnificent cult heroes shrouded in the stuff of infamy and legend … and then there is Syd Barrett. Syd the unforgotten hero of the early Pink Floyd, who virtually set the parameters for British psychedelia with his fanciful songs and space-age improvisation. The summer of love’s prize bloom who soon wilted under the gaze of the pop world’s plastic eye. The sacrificial lamb of the love generation’s wilder excesses who simply forgot to sing or play his guitar. The self-styled’ Vegetable Man’ who re-emerged with two solo albums that bore the scars of hippie innocence and the acid experience with a shocking selfconsciousness (sic). It’s the best of these two remarkable records – and out-takes recorded during the sessions – that are now available on “Wouldn’t You Miss Me”, the first ever Syd Barrett compilation.

Syd’s genius, and its subsequent fragmentation, seems a dream and a nightmare away from a potentially idyllic upbringing as a middle class son of one of Britain’s most prestigious and cultured cities. As a Cambridge child, Barrett (born Roger Keith Barrett on 6 January 1946) listened attentively to stories read by his mother Winifred, tales that instilled in him a thirst for escape and invention, an otherworld he continued to inhabit as an a student at Camberwell Art School during the mid-60s.

Inevitably, music too, inspired him, typically The Beatles, Bob Dylan and – most of all – the gritty, hostile sounds of R&B epitomised by The Rolling Stones. Another, more general influence was the emerging post-Beat subculture, which aspired to a new way of life where poetry, art, literature, music and recreational drug use provided an antidote to artless suburban convention. This provided the perfect environment in which the ever-imaginative Barrett could flourish.

It was Syd’s peculiarly acute imagination that transformed the early Pink Floyd from a promising R&B group with lofty ambitions into the UK’s premier acid-rock combo. Barrett’s fragmented, glissando guitar-playing added an otherworldly gloss to the band’s extended jams, while his shorter songs conjured up a magical, idyllic backdrop to flower-power’s technicolor dreams.

In 1967, when half of the western world appeared to turn on, tune in and at least fantasise about dropping out, these were indeed admirable qualities.

After the debut 45, “Arnold Layne”, scraped into the charts, the the (sic) impeccable psych-pop follow-up, “See Emily Play”, took the band into the Top 5, onto ‘Top Of The Pops’ and around the country’s ballroom circuit. By August 1967, and with the band’s debut album, “The Piper At The Gates Of Dawn”, poised for release, The Pink Floyd were on the cusp of a real breakthrough. Unfortunately, it was the moment when Syd decided to absent himself for a few days; worse still, he returned a changed man.

Always erratic, now his behaviour seriously undermined the group’s future. His ability to translate his raw songwriting into finished studio creations left him; on stage, he often stood motionless contributing nothing more than provoking looks of bewilderment on the faces of his colleagues. After a second guitarist, Syd’s old Cambridge buddy Dave Gilmour, was added to the line-up, Barrett became virtually dispensable to the band. On 26 January 1968, the group that had once relied so much on his contributions, set off for a concert without him. 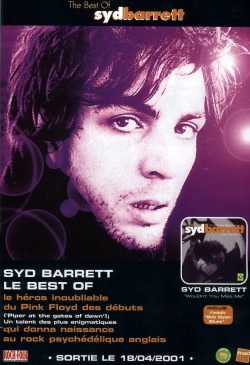 Despite this apparent humiliation (though Barrett already seemed past caring), all was not lost. Pink Floyd’s co-managers Andrew King and Peter Jenner chose to dissolve their relationship with the band, and Jenner – who once described Syd as “the most creative person I’d ever known” – became Barrett’s manager and producer. But while the Floyd steadily rebuilt their career through constant gigging and an infinitesimal attention to detail in the recording studio, Syd became more difficult than ever. Recording sessions for his first solo album, “The Madcap Laughs”, began in May 1968 and continued intermittently until October 1969, overseen by a number of increasingly exasperated producers and engineers.

“Initially, these were booked as demo sessions just to see if Syd had any songs worth recording,” recalls Peter Mew, who engineered several of the tracks on the first record. “it was all a bit chaotic – do a bit, then go off and have a smoke – and Syd wasn’t totally compos mentis. He wasn’t temperamental, just not on the same planet as the rest of us. A lot of the songs had potential and you thought, “if the guy pulls himself together, you’ve got something here.” After stints with Jenner and EMI staffer Malcolm Jones handling production duties, the Floyd’s Dave Gilmour and Roger Waters were drafted in to salvage something from the sessions.

Syd’s work with Pink Floyd had been ornate and sophisticated. The arrangements on ‘The Madcap Laughs” – threadbare, slapdash even – couldn’t have been more different. The effect was both unsettling and inspiring, for here was pitiable estrangement and unharnessed imagination, unrefined and nerve-tinglingly raw. On “Feel”, one of the record’s more despairing songs, Barrett complains: “I want to go home…” Early in 1970, around the time of the album’s release, that’s exactly what he did, leaving his central London flat and returning to the family home in Cambridge, where he famously took up residence in the cellar.

Between February and July that year, he was tempted back to London for intermittent work on a second solo album, “Barrett”, a marginally more conventional – though less inspired – affair thanks to the involvement again of Dave Gilmour. “Dave showed incredible amounts of patience,” says Jerry Shirley, who played drums on the sessions. “We never knew what time Syd would start or finish. He might not even turn up at all. The only predictable thing about Syd at that point was that he was totally unpredictable, as nutty as a fruitcake.”

On these solo records, Syd’s working methods took the psychedelic model of spontaneous creativity to the extreme. “The one thing Syd could still do was to write a decent, unusual song,” says Shirley. “But even they got so unpredictable that even he couldn’t remember them. If you didn’t record a new song right away, it would be gone.” After getting several of Syd’s new songs down on tape, the musicians – who also included Floyd keyboard player Rick Wright and Gilmour himself – would overdub the parts afterwards, no mean feat given Syd’s erratic sense of timing. “He found it extremely difficult to play as part of a band by this time,” maintains Jerry Shirley. “it was just all over the place.” Despite this obvious limitation, Shirley and Gilmour nevertheless braved an appearance with Syd for a comeback concert at the Olympia, London, in June 1970. Four songs into the set, Barrett simply put his guitar down and walked off. By the end of the year, he’d returned to Cambridge for good, largely oblivious to the enormous cult that was growing, and continues to grow around him.

One of many latter-day celebrity Barrett devotees is Blur guitarist Graham Coxon, who once donated a vast, Syd- inspired sculpture to a charity auction. “I think Syd made a decision, although a very twisted one, that a musician’s lifestyle wasn’t for him,” he says. “I like to think of him being happy, painting and going for strolls in the park. I don’t think he misses the pop circus. I think he overdosed on it and chose a more pastoral existence.” And the reason why the Barrett milieu is so enduring? “There is a little bit of Syd in everyone,” he insists. “It’s that sensitivity and vulnerability.” 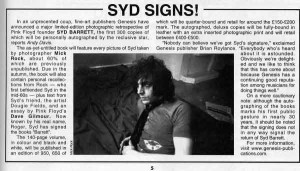 Psychedelic Renegades the book (See above) is now available