This area is set aside for Floyd fans to contribute any interesting Floyd item they may find in Hard Rock Cafe’s all over the world. If you have a pic or two you wish to show to other Floyd fans, please contact us at Liam@pinkfloydz.com

It’s worth noting that the Hard Rock people move their items around from location to location. It might well be that the items you see here are no longer in the places named. 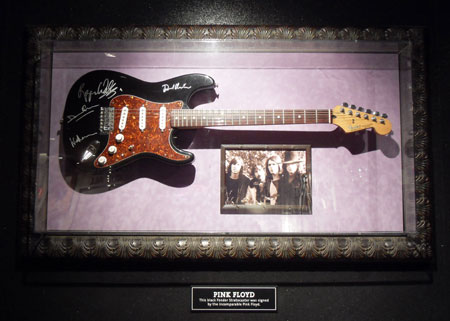 Taken in February 2012 the plaque reads ‘This Fender Stratocaster was signed by all members of Pink Floyd’. With thanks to John Elliott 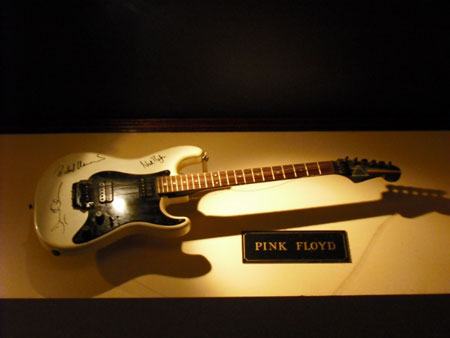 Taken in September 2009 this guitar is signed by Roger, David and Nick. With thanks to Chris & Chloe 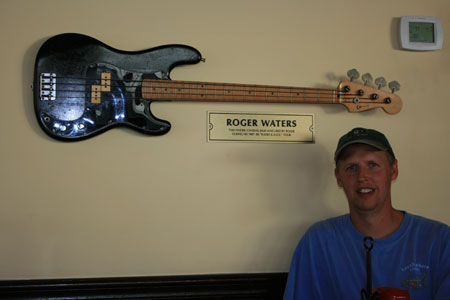 Roger Waters bass as used on his Radio KAOS tour. With thanks to Steve Wenzbauer

This nice little collection was sent in by Antonio who visited the Orlando Hard Rock mid 2009. The pictures show a David Gilmour signed guitar, a copy of a vinyl Dark Side Of The Moon and a general collection of Floyd memorabilia. 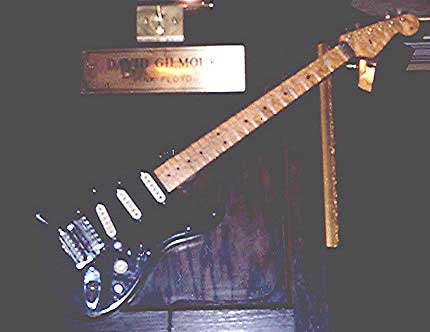 This picture of ‘The Black Strat’ was taken back in 1996, prior to David requesting the guitars return. (It was on loan to the Hard Rock for 10 years.) With thanks to David Arroyo for the picture. This has been verified as the genuine article. 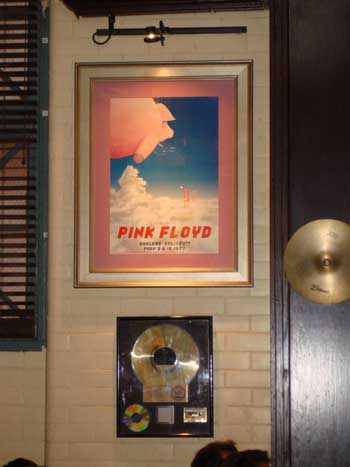 We reckon that the Hard Rock would close down if it wasn’t for the patronage of DMFLOYD. This time he visted the Hard Rock in Baltimore, Maryland (Sep 07) and spotted the famous Oakland poster. He said the award below the poster is for The Wall but it has been modified and the album cover has faded. 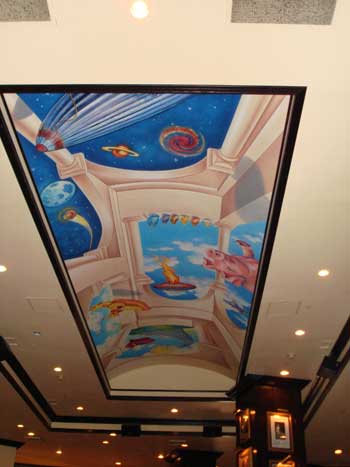 Our good friend DMFLOYD has been at it again. He seems to be touring around the USA and eating out at every Hard Rock cafe he can find! This time his journey took him to Myrtle Beach, South Carolina, where he spotted a cel from the wall and a Roger Waters autograph pic. 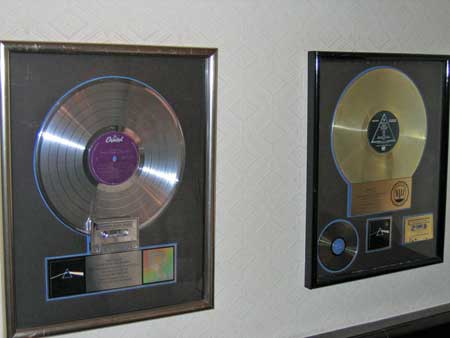 The Platinum and Gold awards for “Dark Side Of The Moon” in the Hard Rock Cafe in Moscow (2005). With thanks to Petrovich in Russia

This fine pair of pictures were taken at the Hard Rock Cafe in Cologne in July 2005 and were sent in by our UK correspondent jce. (After publication it was established that David never owned this guitar, although the signature may be genuine) 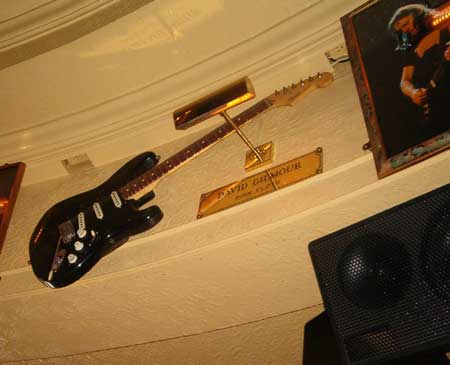 A nice shot of one of David Gilmour’s guitars. Pic was taken mid 2004 and was sent in by our good friend Vernon Fitch (After publication it was established that David never owned this guitar)

The above pictures were taken at the Rome Hard Rock and sent in by Ryan Diesem. That’s Ryan on the right. Be careful with that axe Ryan, it might fall on your head! (After publication it was established that David never owned this guitar) 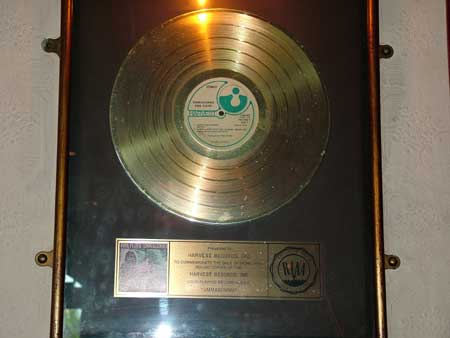 The inscription on this Gold Record that was sent in by Frank Parrish reads: Presented to HARVEST RECORDS.INC To commemorate the sale of more than 500,000 copies of the HARVEST RECORDS.INC Long Playing Record Album “Ummagumma” (Pic taken April 2004. Thanks Frank) 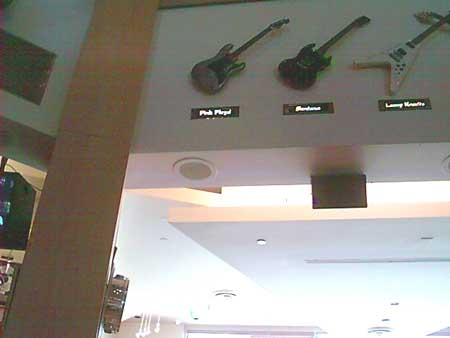 Col took this not so good shot in 2001. The guitar on the left is labeled ‘Pink Floyd’ (After publication it was established that David never owned this guitar). 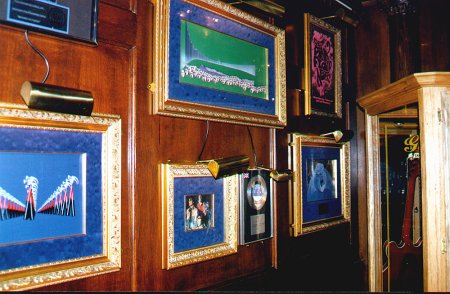 The picture above was taken in one of the two Spanish Hard Rock Cafes. This one is in Madrid (the other one is in Barcelona, see below). They have original cartoon celluloids from The Wall (you can see the marching hammers), as well as gold discs (awarded for Another Brick In The Wall Part II.) and concert posters from the early era. This little Floydian corner is located in the basement and it’s pretty hard to find. Our thanks go to Gregor from Slovenia for sneaking into this room (it’s in a room not open to public) and taking this picture for A Fleeting Glimpse.

Hard Rock Cafe in Cancun Mexico has this very interesting item on the left. The inscription reads David Gilmour. Pink Floyd. Milano 1984. (Davide davide_r@iname.com tells us that this award is called Telegatto) On the right is a Gold record for Wish You Were Here that was presented to Columbia Special Products (Both pics thanks to Bruce Mironov).

Taken in August 2000 by Frank Fenlon of Glanmire, Cork, Ireland. The one on the left is a promotional poster for the Animals tour of 1977 and says ‘Oakland Coliseum May 9 & 10 1977.  The one on the right is a pottery bust of The Teacher from The Wall.

This guitar was used by Syd Barrett on Piper At The Gates Of Dawn and was also used to compose a lot of early songs.Pic was kindly taken and provided by Brian Mallard.