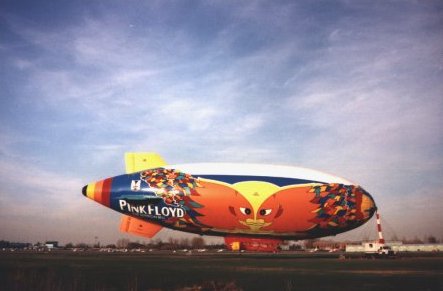 Previously used as the Metropolitan Life ‘Snoopy’ blimp, Pink Floyd made some changes before using the aircraft to promote their 1994 Division Bell tour. It was painted in North Carolina by New Jersey artist Burt Dodge, who was commissioned to paint a Storm Thorgerson design.

The Division Belle was piloted by Nick Mason on March 30, 1994 and David Gilmour and Polly Sampson the next day. 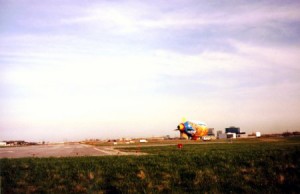 Intrepid Floyd fan Dan Verbin, who just happened to live close to the Buttonville Airport (Canada) got to learn that The Division Belle (as the Floyd had named it) was moored nearby. Trusty camera in hand, Dan shot off the pictures you see here.

On 27 June 1994 The Division Belle was destroyed by a thunder storm while attached to a mooring pole. The envelope of the airship, which was a polyurethane-coated polyester fiber was salvaged and sold off to collectors as you can see below 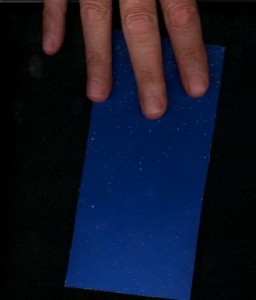 Robert Morse had a pretty neat Floydian experience in 1994 when the good ship Division Belle visited his town. We will let Robert tell you in his own words what happened. 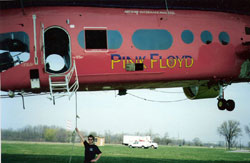 In the spring of 1994 I was working at a local bar called The Airport Inn on the island where I grew up. It is located across the street from a small municipal airport. We get all kinds of small planes in there and occationally blimps, or airships as some call them. It’s the only airport in the Detroit area that accepts them, so we get quite a variety. It was late afternoon and the owner and his kids had just left. A moment later one of the kids burst in the back door and yelled to me, “There’s a Pink Floyd blimp out there!” Naturally I abandoned my duties and ran outside straight away. I looked up and sure enough there was the most colorful airship I’d ever seen coming in for a landing. I could see the words “Pink Floyd” painted on the bottom and side. According to a newspaper clipping I have, the logo was designed by an English firm named Slingsby.

I jumped in my car and drove across the street to watch it land. As I recall the ground support crew was arriving in their trucks about this time also. They had timed it so they would get there just before the airship landed. If I remember correctly they had a pickup truck for local driving, a maintenance truck that also carried helium, and a passenger bus for the crew. I noticed that one of the trucks had a metal plaque on it that said, “Floyd One.” I stuck around for a half hour or so to watch them bring the airship in and secure it to the ground.

I went back to the bar to make sure that the drunkards hadn’t raided the top shelf or gotten into the till. Everything was okay as the owner had asked Bill, our most consistent regular, to watch over things while I was gone. Seeing that things were under some semblance on control. I went back across the street. By that time a small crowd had gathered which was a bit unusual. Most of the airships that come through don’t cause much of a stir. We had the Rolling Stones one there a few years back and I don’t think it even make the local paper.

I remember talking to one of the pilots and asking him how long they would be in town. He informed me that they would be there all week and were hoping to film a commercial for Labbattes Beer. I have no information to confirm this, but I did see a cardboard cutout in a bar in Canada that year that was an advert for Labattes and it did have an image of the airship on it. I think there may have been a contest involved as well. I was tempted to ask the pilot for a ride, but I figured that I might as well go whole hog, so I asked for a job instead. The ride would come later I reasoned.

He kind of gave me a funny look and said, “Well, we’re kind of on the last leg of this thing and we’ll be wrapping it up soon enough. We’ll all be out of a job soon.”

The crew stayed onsite in a building called The Pilot House. They have rooms for rent and such. I got to know them fairly well throughout the week as they came over to the bar for lunch and dinner several times. The younger guys usually stayed until well after dinner. One of them even lit a smoke bomb one night right there in the bar. Fortunately someone got it out the front door before we were fogged out. They did eventually offer me a ride in the airship, but sadly whenever I showed up, it was too windy to get off the ground. I asked the mechanic named Rich if they had met the band and he said that they were, “pretty laid back guys.” I also learned that some of the crew had been here before when the Airship Division Bell was actually the Met Life blimp with the Peanuts logo on it. They were in town a total of six days and it was certainly a great way to start the summer what with the band coming to perform live in July. 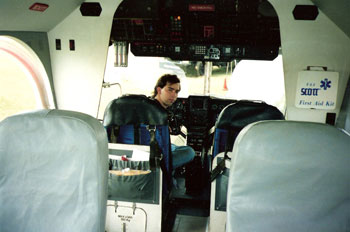 Set The Controls. Robert didn’t get to fly in it, but did get inside