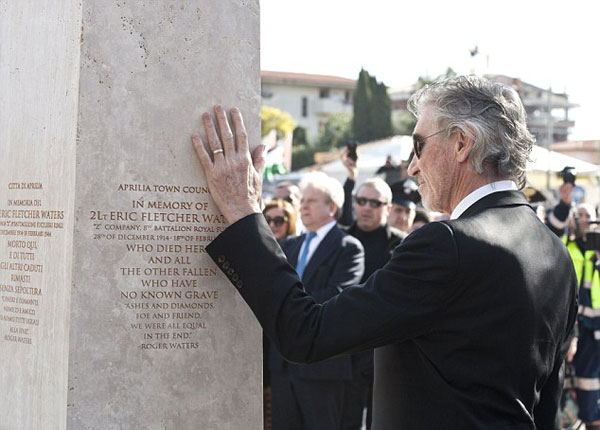 The above set of pictures taken at Anzio on 17th February.

A dip in the memory full of excitement was experienced by Roger Waters at Anzio between 17 and 18 February, on the occasion of the initiatives organized for the 70 years since the Allied Landings, who took the title “If you want peace prepare the Peace.” On Monday afternoon, away from prying eyes, the former Pink Floyd bassist went to the ditch of Moletta, the place where his father Eric Fletcher was victim of the Germans that famous morning of 18 February 1944. Waters has inaugurated a monument of circular shape, in whose center he placed a young olive tree. Along with him stood the mayor of Aprilia and some Italian and foreign military authorities, notably his two “angels”, the veteran Harry Shindler and publisher Emidio Giovannozzi, who, through their research, have shed light on the last hours of life of his father, Eric Fletcher Waters.

Shindler, although now more than ninety, has a firm step but especially so many lucid memories and a firm and resolute voice; the tenacity with which he carried out the research about the battle in which he survived in 1944, allowed the former leader of Pink Floyd to permanently close the grief over the loss of his father when he was just 5 months old, indelibly marking his human and artistic growth. Waters also had a private meeting with the local authorities at the site of the Municipality of Aprilia, where he has proved helpful and friendly with everyone present, impressed by his personality and undeniable charisma, intact despite his seventy candles.

The real huge crowd for the musician took place the next day, however, at the Aprilia school auditorium dedicated to Carlo and Nello Rosselli, where he met with students and the public. Outside the institute his fans were able to follow the event through some screens, and many of them felt offended by that gate closed, defined as a “wall” between them and the artist who has made many to fall ‘till today, and had to settle for a few tens of meters to see their idol during the opening ceremony of the “monument to the dead without burial of the landing”, a stele that will remain for future reference within the school in Carroceto street. A gazebo was set up outside, where a special postmark was affixed to a postcard – it will be available for a few more days before being destroyed. At the side of the musician stood Harry Shindler, towards whom his affection and concern were tangible gestures and glances that showed strong and sensitive human, so different from the despotic person as it has always been depicted in the show business. In front of us there wasn’t a rock star but a man who has shown everyone to be naked, fragile and excited. The very moment he laid his palm on the monument dedicated to his father and all the victims of the massacre, all present stood and around him fell silence and many tears.

Immediately after Waters was back in the school auditorium for a meeting with journalists. Lagging behind the schedule, he immediately reached Villa Sarsina, the splendid site of the Town of Anzio. At the entrance there was a corridor cordoned off with a red carpet, where his fans in search of an unlikely autograph were waiting since the early hours of the morning. The town was literally plastered with posters and billboards with the words “Welcome Roger”, a sign of how the event was felt in this town of Lazio.

Waters was sitting next to the mayor in presence of members of the local administration and a limited number of guests and journalists, gathering emotion with the honorary citizenship of the city of Anzio. At the end of the ceremony he reminded of the veteran who, in one of the recent American concerts of “The Wall”, moved him with the phrase “Your father would be proud of you”; followed by the watchful and proud glance of his wife, wearing the gold medal to the applause of those present, Roger felt the pride of having had a father like Eric Fletcher Waters. In the late afternoon the third and final engagement of the day… the less followed by the national media, but no less important. At 18 he went to the American University of Rome, where he was awarded an honorary degree by the rector Richard Hodges and where he met the students, to which he brought his greetings and life experiences.

Above images taken on 18th February at Aprilia.

Most pictures thanks to Stefano Tarquini with two from Mary Cosco.