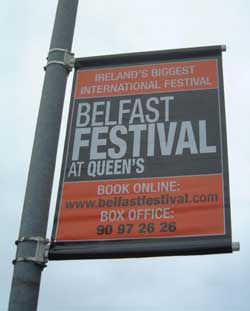 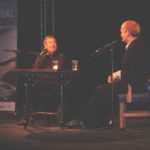 As part of the 2004 Belfast Arts Festival at Queens (22 Oct – 7 Nov), Nick was listed as giving a “Talk”. So that proved the perfect excuse for me to go and see a city that I’ve long wanted to see and of course, partake of the odd Guinness : – }

The talk was billed as part of his promotional efforts for his new book, Inside Out, with the opportunity for getting copies of the book signed at the end, or indeed anything else you wanted to take!

The venue was Elmwood Hall, an old building part of the Queens campus just to the south of the city centre. It was set out with rows of unreserved seating downstairs, with more seating upstairs on the balcony. The stage clearly was being used as part of the wider festival for other events in the hall, but tonight included two chairs and a rather old octagonal table. There were quite a number of seats available as the evening wasn’t a sell out, even at 5 pounds a ticket (3.50 for students!). At the rear was the obligatory book stand. 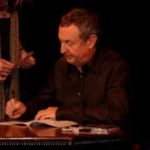 At just after 8pm BBC Northern Ireland presenter Ralph McLean entered and after a brief moment introduced Nick. Using cue cards Ralph ran through a series of standard questions – even asking the “How did you get the name Pink Floyd” question! It seems the questions being asked were intended for an audience of non too knowledgeable Floyd fans. Ralph is obviously a fan and covered all areas of Pink Floyd, basically following the book chapters with a few side stories. The largest area covered was the Syd era and it was nice to hear Nick’s view that he should be left alone and not reminded of a period of his life that’s long gone. I just wish all fans would follow suit!

A clearly nervous Nick, relaxed after a short while, but the ever-twitching foot seemed to be looking for a drum pedal and only stopped after the last question, although he started to relax when the questions were neither probing nor contentious. 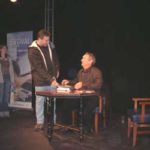 Whilst I enjoyed the event and it was nice to hear it from the “horses mouth” its clear that the answers are the same he’s been giving in all the recent interviews and is the same information that’s included in the book, although some small snippets of information came out to satisfy the obsessives in the audience. Nothing contentious was covered, nor did Ralph probe beyond the surface into the murkier aspects of the legendary internecine warfare. Even when Nick talked about the band member’s drug taking, he missed the opportunity to really elicit something interesting, or explore the effect that it had on the individuals or creative process. Nick also made some interesting diplomatic comments about the other members of the band that could have been explored a little more. For me, Ralph was rather too much in awe of Nick and occasionally started to talk over Nick rather than letting him speak or explore some of the more unknown areas of the band.

No questions were allowed from the audience and after an hour it was over, save for the book sales and signing. Nick stayed on the stage whilst a very orderly queue formed with copies of the book and other miscellaneous memorabilia. Nick duly signed everything he was offered, even a couple of bootlegs!