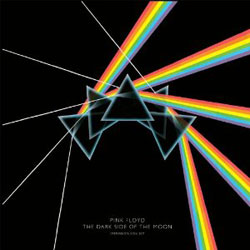 When I sat back on my couch, preparing to once again listen to one of the most groundbreaking and sonically pleasing albums of all time, I was in for quite a surprise: The familiar heartbeat that bookends the classic album, the ticking of clocks, Floyd roadie Chris Adamson’s “I’ve been mad for fucking years…,” and the giggling and manic laughter of Peter Watts were all absent! In fact, upon reading the track listing, one can clearly notice the track “Speak to Me” does not appear. The reason? Avid Floyd historians will be able to tell you that according to Roger Waters, the voices weren’t added until the end of the final 1973 mix that we have all come to know and love.

Instead, we are treated to an alternate introduction to the opening track. A minor chord is sustained for about 25 seconds and all the while, the chord is panned down along with a volume crescendo, giving the listener the feeling that a plane is landing while passing just over our heads. At about 0:25, the familiar E-minor (9th) chord kicks in identical to the 1973 original album.

The coolest feature about this mix is that all of the different instruments and vocals can be heard more clearly, giving the album a more simple and at the same time, spectacular sound. On the “Dark Side of the Moon 2003 Documentary,” David Gilmour informs us that the 1973 release comes from 3rd generations tapes. I’m going to venture to say that this 1972 Early Mix is from a 1st generation tape, thus explaining its crystal clarity.
For example, at 1:28, two notes from David’s Lap Steel come out of the right speaker that alters the entire “lap steel intro”. When I listened for this on the original album, I was able to hear it, but it is so faint that I never knew it was there. It is also just as inaudible in the SACD version as well.
The harmony part of David’s double-tracked vocals are much more pronounced in this mix, giving the entire song a brighter feel, almost as if some had increased the speed on a vinyl record player. This reminded me of when The Doors released their 40th Anniversary remastered self-titled album in 2009. It in, the entire album is played back a faster speed, thus bringing the entire album a half-step higher! To clarify, this is not the case with “Dark Side…”

Throughout this mix of “Breathe,” Roger’s bass has a more deliberate feel as if we can hear every note being played and not lost among the other parts. It also appears that the volume of his bass is also a bit louder. Likewise, Nick Mason’s drum parts are more clear and distinct but no apparent difference in volume.
Saving the best for last, Rick’s piano and organ parts out of the right speaker/ear are amazing! Again, these are parts never heard before on the original album AND on the SACD. I recommend putting on a good pair of Sennheiser headphones in a quite setting: Between the last word of the line “Breathe, breathe in the air…” and “Don’t” in “Don’t be afraid to care,” Rick plays a few notes that contribute to the “new feel” of one of my favorite Floyd songs.

Also, listen for the chord changes via Rick’s organ, also from out of the right speaker/ear when Gilmour sings the following lyrics in CAPS: “For LONG you live, and high you fly” “and SMILES you give, and tears you’ll cry,” “ALL you touch and all you see” “Is ALL your life will ever be.” These now audible organ chord changes lead into the famous “rushing” organ parts that we’re all used to hearing.

Aside from watching “Live in Pomeii” and Classic Albums “The Making of the Dark Side of the Moon” and million and one times, I’m not all too familiar with the “Synthi A” or the “VCS3” to write exactly what’s going on in this piece. However, I did notice a few differences, followed by commentary on “The Travel Sequence”
This track is 20 seconds shorter than the 1973 release. The woman’s voice making airport announcements, along with “Live for today, gone tomorrow, that’s me. Haha!” were absent.
Additionally, the footsteps appear much earlier on this version than the 1973 release. A few new sound bites such as a British ambulance and a train whizzing by make their appearance. The piece quietly finishes sans airplane crashing sound with the initial ticking of clocks that segue into “Time.”

It’s interesting that the Floyd were “were not all that happy” with their jam-piece, “The Travel Sequence” during the recording of DOTM. On the same CD as the “1972 Early Mix,” are two versions of “The Travel Sequence.” After hearing both “Travel Sequence” tracks several times, I love it MORE than “On The Run” for a few reasons: First, The Floyd get very little credit for their “jamming out ability.” I love Nick and Roger’s work together. A fool once labeled them as “the most boring rhythm-section in all of Rock&Roll.” I disagree. Mix this with David’s “scat” and Rick’s syncopated piano chords and we’re talking “Jam-City.” Second, I’ve always wanted to hear more “jam” pieces from The Floyd than just “Echoes” and “Any Colour You Like”.” I’m not criticizing the brilliant ground-breaking work they did with “On The Run,” but I’d love to get my hands on a “Dark Side” studio mix with more human “Travel Sequence” instead of the mechanical “On The Run.”

Aside from the enhanced clarity, the biggest difference between this version and the original album is there is more echo on Gilmour and Wright’s vocal parts. Additionally, there is a “heartbeat-like” rhythm during both of Rick’s vocals and the second half of Gilmour’s guitar solo. The song also ends without seguing into “Great Gig” as heard on the 1973 album.

TRACK 4: The Great Gig In The Sky

When I first heard this version, my first reaction was, “What the bleep happened to the vocals?!?” quickly followed by, “Wow! Listen to that organ!” I’m a huge admirer of Rick Wright’s contributions to Pink Floyd. He’s the John Paul Jones of the group. Without his musical talent and input, the Floyd-sound along with their success would not have existed. Sit back and enjoy this jewel! (PS – I could do without the NASA crap)

I guess Roger found more toys to play with in his ex-wifes pottery shed for this intro on “Money”!! Joking aside, it’s a pretty neat intro. This track is ALL Gilmour in the left speaker/ear! Whenever I’ve listened to this song, I love hearing David’s “scat” playing opposite to Rick’s keyboards. This version brings David’s non-solo guitar parts to life!

There’s that “playing in a tunnel” sound during David’s solo as well as Dick Parry’s sax solo. However, Dick’s real moment is during “Us and Them”.
Back to the guitar solo: Right at 4:00, the echo disappears and it’s just “virgin sounds” from David guitar. Also there’s some interesting guitar work from 4:04 to 4:30. However, my favorite guitar lick from this track comes right at 5:16 to 5:23. It’s that classic Gilmour-Bluesy sound that would make Clapton jump out of his seat and play air-guitar. Again, it’s not the complexity but the style in which he plays.

Another favorite part is the ending where we would usually hear the voices. Instead, we’re treated to Gilmour singin’ and scattin’ his way into Rick’s “Us and Them” intro.
Here’s an interesting bit for all you Floyd-heads: At 6:19, we hear Gilmour whisper “Yeah!” I always thought the “Yeah” was part of the “voices” that were added on later but apparently Alan Parsons was very clever to time the voices in with Gilmour’s vocals. The end result on the 1973 album goes like this: “You certainly was in the right, that geezer was crusin’ for a bruisin’…Why does anyone do anything?…(Gilmour’s) Yeah…Why does anyone do anything?…I don’t know, I was really drunk at the time.”

TRACK 6: Us and Them

If there was ever a reason to fall in love with “Us and Them” all over again, it’s the piano/bass/sax intro during the first 34 seconds of the song. I absolutely love it! Dick Parry’s sax throughout this version is amazing! I enjoyed hearing the “Live at Pompeii” “doo-doo, doo-doo, doooo” between the words “Us” and “Them” I always wondered why it never made it to the final mix.

As for the repeated echo of the voices, it’s interesting hearing them without the echo in the spots where they usually are. Also, there are parts where we’re not used to hearing the echo..

This is one of my all-time favorite Floyd songs. I pretty much had an “eargasm” after hearing this version. Listen closely to every note that Rick plays on your right speaker/in your right ear from 1:05 to 1:18. WOW! Also, David’s “scat” vocals are clearer in this version. Happy times!
I must add that I’m pretty pissed off that this song wasn’t even mentioned during Classic Album’s, “The Making of The Dark Side of The Moon” nor during the “2003 Documentary”

Not a whole lot different than the 1973 release, but one can enjoy the little differences: Rick’s synthesizers at 0:07 and David’s “country” guitar licks from 2:40 to 2:50.
As for that crazy manic laughter: At first, I thought, “Clever!” Now, I’m not so keen on its overuse throughout the song. I prefer Peter Watts, thank you.
You can also hear the use of the “church bells” that were never heard before, except on the SACD version (using an SACD player of course) starting at 3:06.

In the first few seconds, this track separates itself from any other version. Gilmour’s guitar coming out on the right speaker/ear and throughout the entire track changes the entire feel. The backing vocals are clearer as well. Lastly, if you listen closely, you can hear David clearly singing harmony starting at “All you create, all you destroy…” It becomes more apparent during, “All that you eat and everyone you meet…” and “eclipsed by the moon.”