The Final Cut: A History of Pink Floyd 1982-1983
by Vernon Fitch with essays by James Guthrie
PFA Publishing, 2014 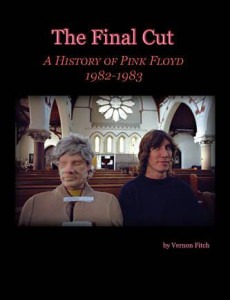 “The Final Cut is a brilliant work of art. The music is a highly emotional response by Waters to the state of world affairs, and it comes across with a conviction and intensity in the songs. His words and music convey his angst over the plight of humankind in the 20th century in a way no other Pink Floyd music ever did, and one can hear the passion in his songs about how humanity tries to deal with the flaws of the society we live in.” – Vernon Fitch, from the jacket copy.

There are dozens of books available on the history of Pink Floyd – one of the few bands which has been chronicled not only in terms of overall history and influence, but also in very exacting detail regarding particular periods and works. And a name which keeps appearing among those authors is that of Vernon Fitch, Floydian historian and collector, author of several books on the band, including The Pink Floyd Encyclopedia, and owner/curator of the Pink Floyd Archives website, a valuable and informative online resource.

This new tome is the follow-up to his in-depth examination of the recording of The Wall and the subsequent live performances, Comfortably Numb, and has already sold out its limited edition printing, though a reprint will be offered in 2015. As with the prior release it is lavishly illustrated and printed to the glossy-paged standards of an art book.

In many ways this particular period of Floydian history – 1978-1983 – is all of a piece in that it includes many of the same participants and methodology in regards to the projects and releases associated with the period – which produced two albums, a film, and a series of live performances. But it was also the end of a creatively productive and much-loved era. The Final Cut is an album which, although initially successful from a sales perspective, has been hotly contested as the first casualty of the legitimacy debate, placed in lesser regard when considering Pink Floyd’s overall body of work. Although Fitch acknowledges the contentious state of the band at the time, he keeps the focus squarely on the making of the album and the import of the songs, which in turn may encourage readers to consider a reassessment of the album’s artistic impact (and if you read my companion essay, something which is long overdue).

The book contains a wealth of detail regarding what led to the creation and recording of The Final Cut – including an examination of the Falklands War of 1982 which provided the primary impetus to Roger Waters’ lyrical direction – and as with its predecessor it is more in-depth than any previous chronicle because of its unique number of primary sources, particularly in regards to the participation of producer/engineer James Guthrie, engineer Andy Jackson, and the album’s photographer and video EP director Willie Christie. Each provides recollections and photos, offering a behind-the-scenes view which is so rarely granted in the Floydian world. And there are essays by Guthrie within the text to further elaborate not only on the details of production both technical and creative but also his viewpoint on Holophonics, the three-dimensional sound matrix utilized to record musical and ambient elements – it was his suggestion to Roger Waters which resulted in its use on the album.

The inclusion of assorted documentation: track sheets, reference photographs of the mixing desk in situ, orchestral charts, production notes, etc., illustrate how incredibly complex the album is as regards its construction – featuring myriad overdubs, sound effects, and other elements contributing to its cinematic scope.

Despite whatever tension was experienced there are also some humorous moments and details: shots of Waters mugging in church with Ringo the binaural recording head, Guthrie’s famous anecdote recalling Michael Kamen’s struggle with focus during a day of recording at The Billiard Room, and photos of Waters and Gilmour facing off across an Atari tabletop videogame console (providing proof of Waters’ claim that the two spent many an hour playing Donkey Kong during mixing sessions at Mayfair Studios). There is also an extensive accounting of the structure of the songs and their meanings, with full lyric transcriptions provided and images of some of Waters’ original handwritten lyrics.

For those devoted fans desiring such exhaustive details this is no less than a godsend among accounts, not merely for a Pink Floyd album but any album, and the meticulous work Fitch put into the project over a period of several years is wholly evident. For anyone considering a purchase of the reprint I can assure you it is an easy decision, and for those of you who have the book…then you have already experienced its elucidatory fascination.

With many thanks to Julie Skaggs. Don’t forget to read Julie’s companion essay about The Final Cut Album

As has been pointed out, The Final Cut book is fully subscribed. However, there will be a limited edition reprint of it sometime late in 2015. For more details on this please contact sales@PFApublishing.com