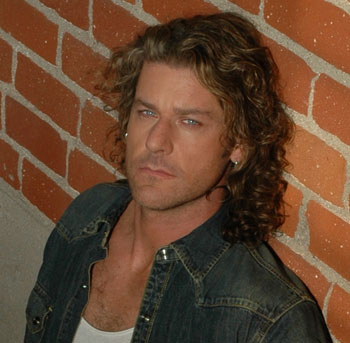 It’s a dream come true for just about anyone – but especially a fan of Pink Floyd – to be selected as a vocalist for the 30th Anniversary Tour of the landmark album The Wall. Los Angeles-based session singer Robbie Wyckoff won this once-in-a-lifetime opportunity almost overnight and is still reeling from the experience, even after an incredibly successful and highly-lauded series of performances in North America. As Roger Waters’ reinvention of the work’s innovative staging is set to begin wowing audiences in Western Europe, I am very pleased on behalf of AFG to bring you an interview with the man who is filling some very significant shoes vocal-wise and doing an excellent job of it. Having had the pleasure of meeting Robbie prior to the first Los Angeles show last year I can happily verify he is incredibly modest and personable and it couldn’t have happened to a nicer guy; I am grateful to Robbie for taking time out of his increasingly-crowded schedule to answer my questions. 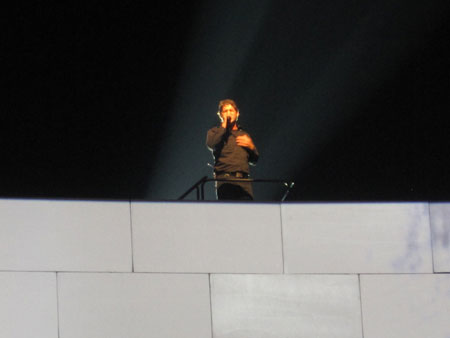 I wondered if you could fill the readers in on how you came to be acquainted with Jon Joyce and thus to audition for Roger’s tour, as he was the vocal contractor responsible for putting together the male chorus.

I met Jon Joyce at an AFTRA meeting in Los Angeles back in early 2000. We exchanged numbers and I gave him a vocal demo. We stayed in touch over the years and we did some very cool sessions together. One of them was for Clint Black at Capitol Records.

I received a call from Jon while I was in a recording session in my home studio. He told me that Roger was thinking of doing some shows and that they were having a difficult time finding the right singer to take David Gilmour’s place. He asked me if I thought I could get close to David’s vocal sound, I was very familiar with David’s sound and was confident that I could. Since I was a kid I have been a big Pink Floyd fan especially the album Dark Side Of The Moon.

As soon as I had hung up the phone, I stopped the session I was currently working on, and recorded one verse and one chorus of “Young Lust,” “Comfortably Numb” and “Hey You.” I then emailed those vocal tracks to Jon. He in turn emailed them to James Guthrie.

A couple of days later, Jon called me and said “You sound great. Roger is really excited and would like you to fly to Lake Tahoe to record some more songs at James’ studio.” The next thing I know Jon and I are on a road trip together, whoo-hoo! We flew into Sacramento and then drove the rest of the way. We listened to Is There Anybody Out There? all the way. Once we arrived at das boot, the three of us got to work. We recorded six more songs in his amazing studio. It was an incredible experience, I got to sing to the master tracks of The Wall album. I couldn’t believe it.

When you received the call from James what was your immediate reaction to the news that Roger wanted to meet you and have you sing for him?

I was a little surprised at first because I didn’t expect to get a call directly from James. He told me “Roger loves what you did and wants you to fly to New York to meet with him and record ‘Mother.'” I was absolutely thrilled but, I tried to remain as calm as possible. I asked “When?” Suddenly I was on my way to New York to meet Roger Waters. 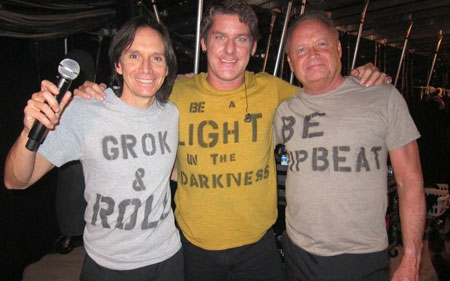 I asked a similar question of Michael Lennon: would you please give us your impression of meeting Roger for the first time, getting to know him?

I didn’t know what to expect upon meeting an icon like Roger Waters. I’d heard some artists can be difficult to work with. I didn’t get that feeling from him at all. I liked him straight away. He was very nice and polite and made me feel very comfortable right away. I thought he was very genuine and down to earth. Getting to know Roger has been great. He’s a very cool guy and is always pleasant to be around. He has a great sense of humor. I love to hear his stories and to watch him work. He’s so involved in every aspect of the show. When I’m singing next to him on stage I feel right at home, I really like singing with him.

You’ve performed in a variety of styles over the course of your career; what do you feel is particularly distinctive and special regarding singing these songs?

The songs are great iconic songs with wonderful melodies. They’re a joy to sing. Some of the songs I have the pleasure of singing, I connect with on a personal level, like “Mother” or “The Show Must Go On.” The other thing is I’ve always been a big fan of David Gilmour, I love his voice and how he sang these songs. It’s important to me to keep it in the spirit/vibe of David.

Are you a Floyd fan, or have you become one as a result of this experience?

Yes, I have always been a Floyd fan since I heard Dark Side Of The Moon. I couldn’t stop playing it. I have to say that I’m even a bigger fan now. I know The Wall songs on a more intimate level and they have taken on a whole new meaning for me.

Jon is, of course, one of the members of the original touring band as well as involved in other experiences associated with The Wall and I wondered what you have learned from him in regards to performing this work and the Floydian (or perhaps a more accurate term would be “Rogerian”) way of doing things?

I’ve always looked up to Jon and I have a great deal of respect and admiration for him. I’ve learned a lot from him and it helps to have his insight and wisdom. He knows Roger or the “Rogerian” way well and has given me some great performance advice, to connect more to the song and the lyrics, and just tell the story.

The rehearsal process was informed by the agenda of recreating history (and to that end I know James Guthrie, as the original engineer and co-producer, was there as an advisor). Did it seem a daunting task at all – not in regards to singing – but getting the phrasing and intonation just right?

No not really, I liked having James there and he gave me great direction and advice both at rehearsal and in the studio. His advice was not so much on the phrasing and intonation but to not sing as hard on certain songs. It was great because he knows David’s voice so well he was able to advise me on his approach and how to keep it more “Gilmour-like.”

Is the staging of the show distracting at any time, given all the special effects?

I’ll admit for the first few shows it was a little distracting. There’s a lot going on especially at the opening of the show. The pyrotechnics, the smoke, the lifts and the puppets. You can say that I kind of got used to it but, not completely. It’s more exciting than anything and a thrill each and every time. 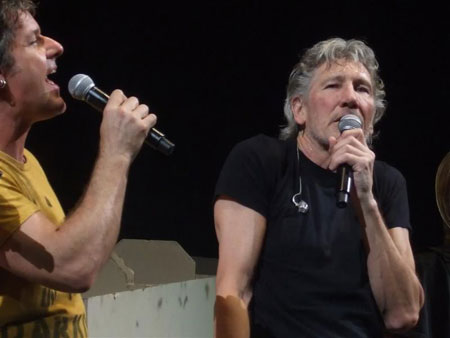 Could you please tell us what the significance of the phrase on the t-shirt you wear during the performance of “Outside The Wall” is, as I understand you came up with it yourself.

Yes, “Be A Light In The Darkness” is a paraphrase that’s biblically-based. It’s always been one of my favorite phrases and something I try to live by.

Many of the members of the touring band have long-running associations with Roger (especially Harry!) and I wondered how you felt you fit in as one of the new guys. And if you could please characterize the relationship between yourself and the male chorus, as I imagine camaraderie and cooperation are very important when considering both the complexity of the show and the length of the tour.

I was a little anxious at first to meet the guys in the band especially the ones who have been with Roger the longest. Everyone was so cool, they all made me feel very comfortable and welcome. The camaraderie between Jon, the Lennon boys (the male chorus) and I couldn’t be any better. They’re all such great guys and we hit it off right away. They’re so much fun to be around and now they’re like brothers to me. Vocally I couldn’t have asked for a better group of singers, some of the best I’ve worked with.

For those who are wishing to become further acquainted with your body of work, what should we look for? Are there any projects you had worked on before rehearsals began which you wish to note?

I’ve have been involved in several projects such as Disney’s hit TV shows Phineas & Ferb and The Emperor’s New Skool in which I sing the theme song. I sang on Diana Ross’s last studio release I Love You and on John “JR” Robinson’s latest CD Platinum. You can look for my new website: www.robbiewyckoff.com. There you will find my bio and a list of all my other credits as well as my new CD Lose Control..

Though I understand it would likely be very difficult to pick just one, is there one particular moment thus far which has defined the experience entire for you?

Many thanks to Col Turner of A Fleeting Glimpse, Michael Lennon, Colleen Kirk, and an extra special thanks to Robbie and Victoria for their kindness in conversation. 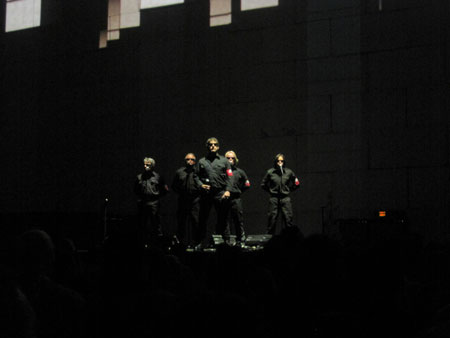 Robbie Wyckoff and the male chorus
(photo by Robert Perry)