All content on this page thanks to John E 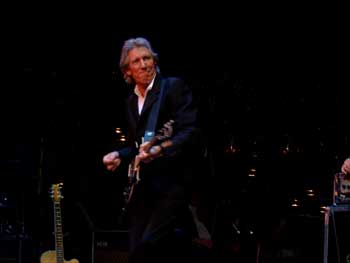 Well – another week, another Roger performance, another country, and a totally different event.

Whip Craic in aid of the Countryside Alliance turned out to be a very varied night of entertainment. Compared by Marsha Fitzalan and Anthony Andrews – an actor and actress and some fame, the night started with the Whip Craic Away tune which lead into another familiar tune – Crown Imperial performed by the Royal Philharmonic Concert Orchestra conducted by Anthony Inglis. The Orchestra stayed on stage throughout the show.

After several more slots, the compares introduced the Overture to Ca Ira conducted by Rick Wentworth. To me, a very interesting and a very nice piece of music. Starts off in a familiar fashion with echoes of the Pros and Cons and several other Floyd classics, it then leads into a piece of haunting music played on the violins – would be nice to hear Rick play this on the Hammond ;-). The horns then lead slowly into a rousing umpapa bit on the trumpet, that sounds as though it intends to evoke scenes of country sports (lol). A more dramatic part follows that seems far darker – reminds me of a thundery English day with heavy rain. It then ended rather suddenly though! Pity – I was just getting into it.

At around 5 minutes long, it’s not the longest piece but was great to hear in such a great venue – and after 10 years it was just great to hear some of it 😉 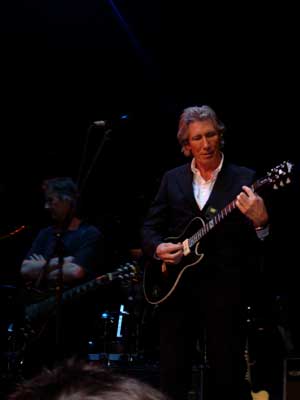 Roger then came on with the whole ITF2002 band, except Norbert, to play three songs – Wish You Were Here, Flickering Flame and Comfortably Numb (the same three songs that he did at the Music To My Ears shows last week). These all sounded great – perhaps the best versions that I’ve heard this band perform live. FF certainly needs the input of PP Arnold. Chesters solo in CN was great – think he has been working on it!

The backing singers seemed nervous when they came on but then settled down when they recognised a gaggle of people in the front two rows that they’d seen earlier in the year at a number of shows. Part way through FF, Snowy noticed us and just laughed then shook his head in disbelief – whenever they play, there are these bizarre fans – LOL

The audience, a mixed bag of Roger fans in jeans and Tshirts and older people in suits and ties gave Rog a standing ovation after his set – and some people near me after the show were very impressed with his performance and the songs, that they were asking who he was and where could they get some more of his music – he certainly made some new fans tonight. 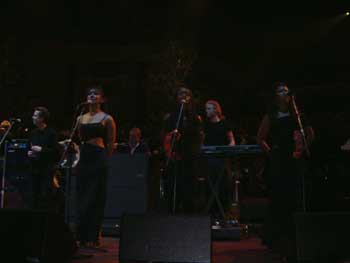 Also at the end of the show a very English gentlemen came up to me and asked “Is this the chap that bought the house in ….. on the River ….” (I’ve removed the names for privacy). I answered that he was. “Oh that belonged to my friend, when one of his people knocked on the door and asked how much he wanted to sell it for, he didn’t, but having had it valued recently doubled the price and quoted that. Fine said the chap as long as you can be out in six weeks”. Even if this guy wasn’t telling the truth it’s funny and his very posh accent made it even funnier.

Interesting to note that the programs were £5 and the Polo shirts with embroidered logo were £10!! A very fetching green colour with logo in red. Not like the £15 programs, £35 Tshirts and £50 Polo Shirts that you get at a normal rock concert. Just makes you realise where all the profit comes from.

Overall I really enjoyed the whole night – not just the Roger bits – but all of the music, the great compares, the funny jokes and stories. The venue is also superb. Very relaxed and calm and no body searches or metal detectors like there was in New York. Nice to be home.

They wasn’t much promotion of the Alliance nor propaganda, but then again the audience would have not needed that, already being converts. 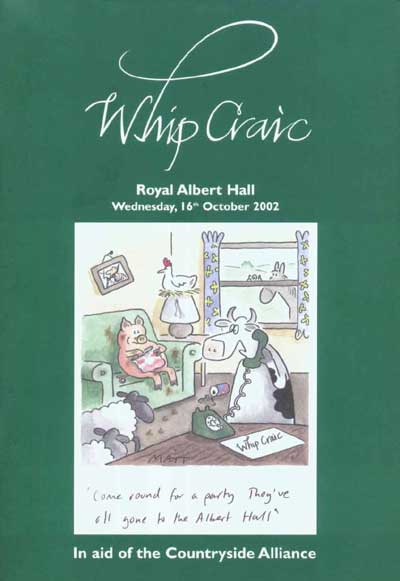 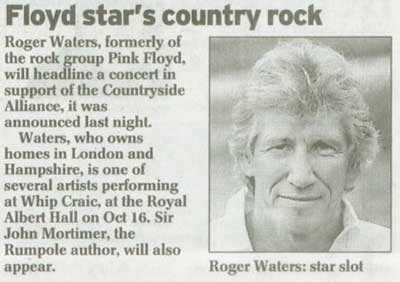